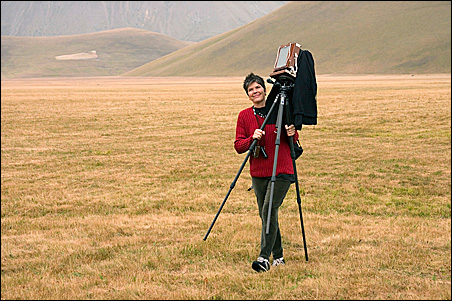 JoAnn Verburg holds two St. Paul zip codes — one for the apartment she shares with her husband, the poet Jim Moore, and one for her studio, just south of the Wabasha Street bridge. But even from early in her career, Verburg’s photography had a trajectory beyond the Twin Cities.

Many of the portraits, landscapes and still-lifes that elevated her name in fine art circles come from elsewhere — East Coast artists and friends, Italian olive groves and, no matter where she sets up her camera, her patient and pliable husband. As it is, Verburg isn’t home often or for long, splitting much of her working time between Italy and, for the sake of a warm place to think, Florida.

Twin Cities galleries and museums tuned into Verburg shortly after she moved here, in 1981. She made quick connections to the Walker and its visiting performing artists, inspiring photographs that are still among her best-known images. The Walker commissioned Verburg 23 years ago to shoot photos for a catalogue documenting the stage director and playwright Robert Wilson. Present Tense: Photographs by JoAnn Verburg, organized by the Museum of Modern Art in New York, is her first exhibition at the Walker.

Opening January 12 in the Friedman Gallery, Present Tense features more than 60 pieces, anchored by the diptychs and triptychs — pairs and trios of images placed side by side — that have become Verburg’s signature. The exhibition also includes several works not included in the MoMA presentation.

“I feel a great debt to the Walker’s performance curating. The connection with Walker is huge,” Verburg says.

She nods to her first year in Minneapolis and to the portraits she took of the Trisha Brown Dance Company, then in residence at the Walker. For a while, Verburg rented a room from the Walker’s performing arts curator, Nigel Redden, who also housed many of the museum’s visiting performers, including Brown. Verburg would go to the shows and, back at the house, listen to the performers dissect their evenings. (Brown returns in April for performances and an exhibition of her visual art).

“They really talked about the body, and their language about dance really affected me,” she says. “I hadn’t really thought about the body as an artist, but I definitely felt something when I made my first image. I pinned it on the wall and it was like a magnet — I couldn’t stop looking at it. It gave me more impetus and avenues to pursue in thinking about the viewer as a physical being and not just as a disembodied eye.”

Verburg isn’t shy about discussing her work — indeed, she’s enthusiastic to share it and show it, speaking with a quiet quickness and rarely breaking eye contact. At the same time, she’s uneasy about being seen in her work — she rarely appears in her photos, and only then on the periphery. Thumbing through the catalogue for Present Tense, she stops at certain images to describe them as “beautiful” or “gorgeous” with the detached wonder of a new viewer, not as someone responsible for them.

“It’s very much a back and forth, letting people affect me and me determining things. It wouldn’t be any fun if I controlled everything,” she says. “I’m the person who starts it, but it’s everybody’s experience, and everybody’s going to view it differently.”

Born in 1950 and raised in northern New Jersey, Verburg made the most of rare access and opportunities. Her father worked as a chemist with a company that manufactured photographic paper, and she studied the pantheon of photography and printing during a two-year internship at the George Eastman House International Museum of Photography and Film. In the late 1970s, the Polaroid Corp. invited Verburg to launch a visiting artists program, to experiment with its new 7-foot high, 300-pound camera, which used 20-by-24 negatives. Verburg brought in artists such as Chuck Close, Jim Dine, Olivia Parker and William Wegman, observed their processes and began making her own Polaroid portraits. To this day, large-format cameras are the foundation of her work.

In the early 1980s, using an 11-by-14 camera with bellows that expand to 5 feet, Verburg began creating photographs she refers to as “the heads.” She imposed and implied relationships among people not only within a frame but from one frame to the next, placing physical spaces she calls “hiccups” between the images to create narratives — or at least invite the viewer to imagine narratives.

“I got interested in doing something like a yearbook portrait but with a permeable boundary, so you would feel the affect of each person on each other person,” she says. “I realized that, for all intents and purposes, I was redefining myself (as an artist).”

Verburg now works almost exclusively with a camera that uses 5-by-7 negatives, allowing her to focus on more than one point in her viewfinder and turn what otherwise might wind up as static landscapes into rich picture windows. By rendering at least one object as life-sized, she says, her photos more easily immerse a viewer.

Art critics note the motion in her images and praise Verburg for an ability to stretch time and tease the viewer. Her images of people coax you to peek around the edges, while her photos in nature emerge in layered focus.

“It creates the implication that the boundary between the space in the image and space in the gallery is permeable, that it’s the same air,” she says. “That comes from thinking of being an audience to a performer, that you’re in the same time and space with the performer.”

Siri Engberg, the exhibition’s coordinating curator for the Walker, likened Verburg’s photographs to Cezanne’s paintings, in that both artists composed their works to draw viewers in as participants.

“You see these heads on the pure white background to the bodies of swimmers in a staged environment, to her husband in a more interior environment, to the photographs in nature with nobody in them. JoAnn is the connecting thread — her eye, looking at all these things,” Engberg says. “What is continuous is her presence, not just as the photographer but as the editor of these images.”

Verburg is mulling what to do when she runs through her shrinking stash of 5-by-7 negatives. Kodak, the exclusive supplier of them, discontinued that line in 2006. “I’m still sick about it,” says Verburg, who reacted to Kodak’s announcement by snapping up every box she could find, investing more than $7,000. She waves off the prospect of digital photography.

“The focus looks weird. There’s an etchy quality to the edges I don’t like, and the light and other things just don’t look right,” she says. “I’ve heard Chuck Close say he could make art with pipe cleaners, and I feel that way, too. I just don’t know what that work will be.”

One certainty, she says, is the Twin Cities will remain her home. She’s also considering shooting more work closer to home. In lieu of a nearby ocean, she imagines quiet time at a lake to satisfy her current craving to photograph water.

“What keeps me here is partly Jim, and I really love the whole feeling of politics and people,” she says. “When I moved here, I was really thinking about who I am and who I wanted to be. It’s not that it’s not up in the air now, but it’s up in the air differently.”

Contemporary Art in Conversation: JoAnn Verburg with Nancy Spector and Siri Engberg
Thursday, January 24, 7 pm
Walker Cinema
Free
In this conversation with the exhibition’s curators, Verburg discusses her 30-year photographic career and muses on the ways artists performing on the Walker stage in the early 1980s altered her view of photography.