Critic Lightsey Darst offers an incisive review of the premiere performance of “DEBUT” by a promising new chamber ballet company which makes its home in “the twin city less frothing with dance.” 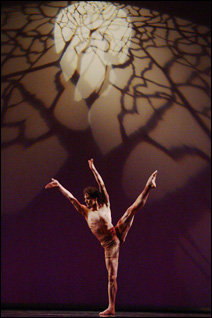 IT’S NOT EVERY DAY that a new ballet company appears in the Twin Cities. But today, we have one: The Chamber Ballet of Saint Paul debuted Valentine’s Day weekend at the Fitzgerald. (A chamber ballet is a ballet company with a small roster of dancers, generally producing small or new work rather than full-length classical ballets.) The press materials for the Chamber Ballet came out sporting some truly extravagant claims, proclamations of pre-eminence and novelty initially puzzling to anyone familiar with the long-established Minneapolis-based chamber ballet companies James Sewell Ballet and Minnesota Dance Theater; but at the performance I realized the hyperbole was aimed exclusively at touting the ballet company’s place in Saint Paul, the twin city less frothing with dance. So Saint Paul has its own chamber ballet now: well and good.

How good is this new company? Overall, the recent performance showed that the Chamber Ballet is a fledgling — sometimes flying, sometimes limping — but a strong one, already capable of some lovely flights. Even at this early stage, the company has talent, discipline, and a clear and reasonable vision for itself. What sort of bird the company will be when full-grown isn’t clear yet. I’m hoping for a heron or an egret, though — something beautiful but strange.

Since the Chamber Ballet is directed by a choreographer and featured nothing but that choreographer’s work in its debut, the quality of director Phillip Carman’s dance thinking looks to be crucial to the ballet’s success. It’s a weight that Carman, recently of Maryland Ballet and Miami City Ballet, can carry, particularly if he sticks to the classical work that calls out his own best ideas and suits his new home city so well. Nightmusic, a confection in honor of Mozart, showed off Carman’s distinctive abilities: wit and sensitivity in his approach to the music and a touching dedication to real ballet steps (no run-and-pose here). Carman’s also studied up on ballet history: his Nightmusic aspires to Petipa’s trick of creating character in the motifs of even the briefest dances, while his L’apres-midi d’un Faune (The Afternoon of a Faun) copies the near-Egyptian gestures from photographs of Nijinsky’s original Faun. Throughout DEBUT, I wished for more individuality in the dances. The centerpiece of Nightmusic, a beautiful duet of leaning embraces, would have been more beautiful if it had been stranger, if Carman had pushed that idea of leaning as far as it could go. The stage-paths traced by dancers seemed a bit random: what were soloists doing muddling around at the sides, in the no-man’s-land between the upstage and downstage corners? And, in general, I wanted more distinction, more dynamism. But perhaps that will grow as Carman learns more about the dancers at his disposal.

I couldn’t tell whether it was the Chamber Ballet’s dancers or Carman’s treatment of them that was so uneven. In places it looked as if the dancers had been in charge of their own rehearsals: some were spot-on others were barely clinging to the choreography. (I was glad to see that Claire Lane survived her nerve-wracking partnering with Ross Edwards.) Certainly, the dancers don’t look like a company at this point: there’s no unity of style or approach (while some dancers look natural, a few are afflicted with ballet-face). In this mélange, three dancers stood out. Claire Westby is simply a good dancer. She’s young — still in high school — and she’s without quirks; Carman doesn’t appear to know what to do with her other than give her starring roles. Is she a princess? A romantic? An earth spirit? If Carman can keep her, perhaps we’ll find out. Tall and thin, Jennifer Rockwell looks made to be a siren, but she also shows a surprising queenly presence in her balances. She’s just a touch too aware of herself, but more confidence in her roles should soothe that away. Neither Westby nor Rockwell is a wizard, though — a fast turner, a mad leaper — and Carman needs one to balance out the sinuous and animal qualities of his leading dancer, Andrew Lester. If Carman’s still exploring the abilities of his other dancers, he’s already taken the measure of Lester, who is not a prince or an acrobat, but a sensual, feline dancer, made for the part of the Faun. With the other dancers, interest may arise in time; for now, the collaboration of Carman and Lester is the one to watch.

The Chamber Ballet stands on a firm foundation, which bodes well for the ballet’s future. This firm foundation includes professional technical support. I wasn’t in love with the costumes — garish here, too flouncy there — but the uncredited lighting design powerfully assisted Carman, with a fantastic thorn tree looming over his “Faune” and a billow of cobalt blue smoke against a scarlet backlight beginning his modern ballet In the Moment. Whatever the Chamber Ballet currently lacks, it’s not short on experience and desire. And this should make the ballet’s next steps worth seeing.

About the writer: Lightsey Darst writes on dance for Mpls/St Paul magazine and is also a poet and editor of mnartists.org’s What Light: This Week’s Poem publication project.