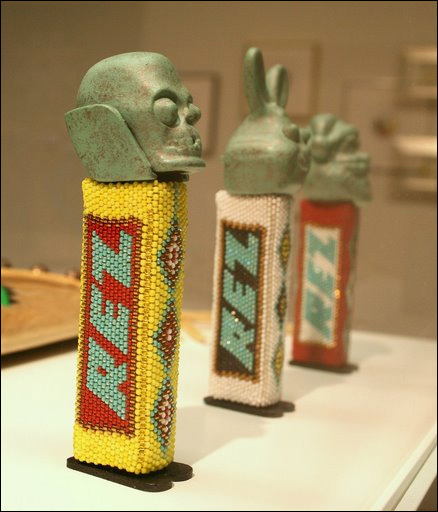 Artist Todd Bordeaux takes a different view of the ubiquitous Pez dispenser at a show at Ancient Traders Gallery, 1113 E. Franklin Ave. in Minneapolis. Bordeaux has created “Reservation Diabetes Dispensers” for “RE: Generations, Legacy & Tradition.” The show runs through Feb. 23.

ANCIENT TRADERS GALLERY presents RE: Generations, Legacy & Tradition, an exhibition highlighting the contemporary in carving, quilting, beadwork, ledger drawing, and quill work. The show runs through February 23, 2008. There will be an artist talk February 22, 7 pm (refreshments before) at the gallery. Speakers include Todd Bordeaux, Gwen Westerman Griffin, and Karen Beaver.

RE: Generations, Legacy & Tradition exhibits work by nine expert and award-winning American Indian artists who innovate within the cultural artistic traditions of carving, hide painting, quilting, beadwork, and ledger drawing. Included in the exhibit are three recent winners of Bush Foundation fellowships. This show highlights contemporary statements within tradition and across generations in American Indian families.

Generations: In gathering these artists, curator Heid Erdrich, focused on how generations of family practice influences an artist’s work. Included here are husband and wife artist teams, grandson responding to elder’s artwork, niece to uncle and so on back to ancestor—still all in the present. A feature example is Cheyenne artist Alaina Buffalo Spirit, whose people have had women’s art societies for generations.

Native American rawhide painting in general, and Cheyenne women’s painting in particular, is not widely understood, but it deserves a place among the world’s great artistic traditions based on both its depth in time and its depth in expressive power.
—Cheyenne Women’s Rawhide Painting by Winfield Coleman

Legacy: Gwen Westerman Griffin, a writer and professor as well as an artist, is the niece of actor and activist, Floyd Red Crow Westerman. She worked with her uncle on Exterminate Them a documentary series about the American Indian Holocaust. When the elder passed on, filming had begun on the second installment, called The Great Plains Story, about the Dakota-US War here in Minnesota and the exile and attempted extermination of the Dakota people from their homeland. Gwen intends to continue her uncle’s work.

Floyd talked about how we need to tell the truth about our people and our history. I like to think I do that in my art as well. We have a long, rich history that explains not only where we came from, but also our responsibilities in this world to each other and to the universe. My art is grounded in Dakota culture and tradition, history, oral tradition and language recovery.
— Gwen Westerman Griffin

Several artists in this exhibit present art within their family traditions. Husband and wife team Kevin and Valerie Pourier work together to create intricately his designed horn spoons and cups. The Pourier’s horn carving descends from objects carried by the revered Crazy Horse, an ancestral family member.

Well-known beadwork artist Todd Bordeaux (Lakota) is a descendant of the famed Lone Dog whose Winter Count chronicled Lakota history in art. Bordeaux’s work both responds to and recreates images from his ancestor’s art. His partner Karen Beaver (Yupik/Mandan) creates exquisite beaded and feathered masks that combine her cultural traditions from Alaska and the Great Plains.

Reproductions of Lone Dog’s Winter Count and an image of a carved and inlaid object carried by Crazy Horse are in a book the gallery staff have created to give our guests further information on the artists. We encourage you to look at these interesting materials both for context and by way of seeing more than the small sample of work we could include in this exhibit.

Tradition: Emerging artist Límon (Ojibwe/Oneida) draws on a traditional Oneida turtle design to make a number of statements with one shape by including contemporary objects while still, somehow, using the one-needle beadwork technique.

Quiltmaker Vi Colombe (Modoc) stitches in a new tradition with her star quilts in circles, in reference to The Ghost Dance, and in wildness that makes the old star pattern burn anew. Also a Bush Foundation fellow, Vi’s work comes from her life on a South Dakota ranch and her community of American Indian women quilters. Women sharing the production of quilts seems a universal tradition that Colombe’s work takes part in: the stitching on the work you see here was done by Judy Woodworth.

Jeff Savage told Ancient Traders a lovely story about how he began quarrying pipestone to make ceremonial pipes. As he was working in Southeastern Minnesota, a Lakota elder told him to use all the stone, to make things with it. Savage continues to make pipes and carve moose bone, an Ojibwe tradition he is helping toward recovery.

The sad stereotype of Native art is that it’s one thing— beadwork, drawings of buffalo, wood carvings, basket-weaving—that never changes. But Native cultures are a lot deeper than people may perceive them to be. And Native artists, like any other artists, produce art that’s dynamic and always evolving…
— Jeffrey Chapman

The words above were said by painter, flute maker and University of Minnesota teacher Jeffrey Chapman in response to the recent Changing Hands: Art Without Reservation at the Weisman Art Museum, in Minneapolis. A similar insistence that traditional art can be contemporary, even as it recognizes tradition, motivates this exhibit.

RE: GENERATIONS, LEGACY & TRADITION is the tenth in a series from Mitakuye Oyasin/All My Relations, an urban Indian arts program designed to honor and strengthen relationships between contemporary American Indian artists and the living influence of preceding generations, between artists and audiences of all ethnic backgrounds, and between art and the soul of the neighborhood.