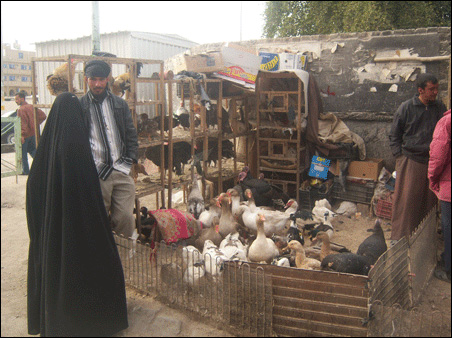 From tomatoes to electricity and water, shortages plague people in Iraq, especially the poor. This is the second report in a series of three from Sami Rasouli in Iraq.

Life is unbelievably hard for families in Iraq today, especially the poor.

Tomatoes are a big part of the Iraqi diet, and the local supply of tomatoes comes from farms in southern towns and villages such as Zubair, Safwan, Al-Nasiriyah, Al-Najmi and Jiwa’idah located west of Basra, which normally produce 10 million tons of tomatoes annually. But this year, the cold wave has completely destroyed the tomato crop in southern Iraq. Tomatoes get damaged if not covered by plastic sheets when the temperature goes below eight degrees Centigrade. Ordinarily, the plastic sheeting is produced by the Iraqi National Petrochemical Company in Basra, but they have been closed for months, allegedly for maintenance. More than six hundred tomato farmers have suffered a big loss.

Sami Rasouli, a former Minneapolis businessman, returned to his native Iraq in 2005. He is the founder and executive director of Muslim Peacemaker Team, a non-profit, non-sectarian organization that teaches non-violence and human rights, and brings Iraqis from all backgrounds together to work for the good of the country. This is the second in a series of three articles. Read the first article, Freezing in Iraq.

There are greenhouses on the road between Najaf and Karbala, but still not enough food is being produced locally. Vegetables and fruits are imported from Syria, Iran, Jordan, Kuwait and Egypt, and people like myself and my sisters can afford to buy it, but largely, people still depend on the Oil For Food program. People get monthly rations of rice, oil, lentils, grains, soap and detergent, but the distribution system doesn’t work as well as it used to. Sometimes, people don’t get this food for two months at a time because of shortages or corruption. So there are many beggars who are poor, and stand on the street or on the intersections or go to the bus stations and get on the busses to ask people for money.

For the last month, we have been getting one or two hours of electricity a day, at night or in the early morning, but not when we need it. I can’t explain this – Najaf is a Shia city, so the government does its best to supply this area with power – unlike the cities in western Iraq, which are Sunni – but in spite of this, we still don’t get much electricity. And there has been no maintenance on the electrical system in the last five years. There are small neighborhood electrical generator operators, but often they can’t get fuel to operate their generators, so people buy their own home electrical generators, made in South Korea or China. The exhaust from these generators is a health hazard, so we keep ours on the roof.

The water supply is terribly contaminated. The previous regime kept a good system of monitoring the water system across the country, but due to de-Baathification, most of the employees who ran the water left the country or got killed or thrown in jail. The water treatment plants are run now by illiterate people who aren’t properly trained and don’t know how to run them. They don’t have minimal education levels to do it. They don’t know how to add chlorine to sterilize the water. Even when there are qualified employees, the filtering system is old and broken. In some neighborhoods they don’t have proper sewage systems so they dig their own sewage systems in the street.

I can afford to buy bottled water for my family, but we avoid bottled water made in Iraq, because there is a big scandal – they just fill the bottles with water from the tap. So we buy Aquafina, a liter and a half for about half a dollar. Omar, when we shower him or give him a bath, we don’t use regular water to wash his head, we use bottled water.