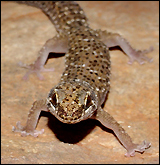 A pachydactylus capensis, like many geckos, curls its toes back as it walks.

The dime-sized feet of a Tokay gecko pack enough sticking power to suspend a 250-pound man from a ceiling. They enable the 12-inch lizard to scale walls at breakneck speed or saunter upside-down across a plate of glass. A gecko can stick to the molecularly smooth surface of a silicon wafer. It will hold fast underwater and in a vacuum. It can attach and detach its toes with ease, and its feet never stick to each other or clog with sand and dirt.

These remarkable abilities have been observed for centuries—in the 4th century B.C., Aristotle described geckos running up and down trees—but it wasn’t until 2002 that scientists finally figured out just what makes the gecko stick. The key, it turns out, is in their toes, and Bell Museum researcher Tony Gamble is mapping the evolution of these remarkable digits.

Gamble and his colleagues will be the first to provide a complete evolutionary history of the 1,100 species of gecko—knowledge that will inform the work of materials scientists hoping to develop a synthetic gecko adhesive. If the gecko’s talents could be replicated, the result would be a self-cleaning, reusable adhesive that functions underwater, or even in outer space. Geckos are a hot topic in the field of biomimicry, which uses nature as a model for developing new technologies.

Centuries of speculation held that suction, capillary forces, or a sticky glandular secretion caused geckos to stick. Only when scientists were able to examine gecko toes at the nanoscale was the true mechanism revealed.

Gecko toe pads consist of a series of ridges covered with millions of tiny, hairlike stalks called setae. The tip of each seta splits into hundreds of small branches that are capped by microscopic, spoon-shaped structures called spatulae. Researcher Kellar Autumn of Lewis and Clark College was the first to prove that the very structure of the gecko’s toe pads—an evolutionary adaptation of ordinary lizard scales—is what allows geckos to stick.

Through a series of experiments, Autumn demonstrated that the gecko’s sticking power is the result of an atomic bond, known as van der Waals force, that occurs between the molecules in a gecko’s toe and the molecules in the surface of the rock, tree, or other substrate it is climbing. The microscopic size of the spatulae (each spatula is just 0.2 micrometers wide; a human hair is 100 micrometers wide) allows them to come into such close contact with the surface of a substrate that this molecular bond is formed. The bond of an individual seta is weak, but each Tokay gecko has 6.5 million setae—more than enough to support its 50-gram weight.

In fact, Autumn discovered that a Tokay gecko needs only 2,600 of its setae attached to stick itself to a wall. The likely reason for this seemingly over-engineered design is that at any given time, only some of the gecko’s setae are able to come into close enough contact with the rough, pitted surfaces of a rock or tree branch to form a molecular bond.

Van der Waals forces allow a gecko to stick without expending energy or effort. A gecko is not clinging to a rock; it’s molecularly attached. To break the bond, geckos need only change the angle at which their toes connect to the substrate— which might explain why some geckos can curl their toes upward, rolling and unrolling them like party favors.

Van der Waals forces explain not only how geckos stick, but also how they don’t stick to dirt, sand, and dust in their environment. According to Autumn, a gecko’s self-cleaning feet shed dirt particles effectively because only a few spatulae stick to a piece of dirt. When the dirt comes into contact with a rock, it is more strongly attracted to the rock and will be pulled off the gecko’s foot. This self-cleaning quality would, of course, be highly desirable in a synthetic gecko adhesive.

In theory, “gecko tape” could be fabricated out of just about any material, as long as it could be split into fine enough hairs. Autumn and his colleagues Robert Full and Ron Fearing, both of the University of California at Berkeley, are on the leading edge of developing geckostyle adhesives that may someday be used in a wide range of applications, including robotics, microelectronics, surgery, or even toys.

Going back in time
Gamble and his colleagues are the first to chart the evolutionary history of geckos based on DNA samples from 400 of the 1,100 gecko species, including samples from each genus. The end result of this research will be an accurate gecko family tree that scientists can use to investigate how frequently sticky toe pads have evolved and what environmental factors correlate with sticky toe pads.

Earlier scientists classified geckos according to the shape, or morphology, of their feet. However, DNA analysis reveals that not all geckos with similarly shaped toes are closely related. For example, leafshaped toes have evolved separately in at least three different gecko families. “Leafshaped toes have evolved many times independently,” says Gamble. “It may only evolve in areas with granite and not sandstone, for example. It could tell us something about what is needed to stick to a particular substrate.”

Gamble notes that 90 percent of all research on gecko feet is based on Tokay geckos, the giant house gecko of Southeast Asia. But in nature, there are many gecko species—14 percent of all reptiles are geckos—with many types of toe pads.

“If you’re looking at biomimicry,” says Gamble, “you might want to try out all the different ways nature makes geckos stick in order to see what’s best for your particular application. At a molecular level, the mechanism of sticking may be the same. But it could be that having the pad at the base of the toe versus the tip makes you faster. This may not matter if you’re designing a coat fastener, but if your goal is a military application, say a Spiderman suit that allows you to scale walls, speed could make a difference.” Likewise, adds Gamble, the best adhesive mechanism for an interoffice mail envelope with a flap that sticks and resticks to paper may be different from what is needed for a window-washing platform that will climb up a 20-story building.

“Spiders, flies, and geckos have come up with multiple answers to the question, How do I stick when I climb?” says Gamble. “We’re laying the groundwork for understanding the amazing diversity that evolution has created, and for using all of it.”

Edited from Imprint, winter 2008, a publication by the Bell Museum of Natural History.