An unusual hamburger experiment, from the University’s dietary research annals 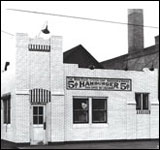 This White Castle restaurant, once located at 616 Washington Avenue S.E. in Minneapolis, may have been the source of hamburgers in McClendon’s experiment.

What happens when you take a healthy young man and feed him nothing but hamburgers and water for three months? It sounds like the genesis of an edgy film — and in fact “Super Size Me,” a 2004 documentary, followed one man’s 30-day immersion in McDonald’s cuisine — but a real-life version of this experiment took place at the University of Minnesota in the early 1930s.

This tale of experimental hamburger gluttony had its genesis in the 1920s in the mind of Edgar Waldo “Billy” Ingram, owner of the White Castle fast food chain. Then headquartered in Wichita, Kansas, White Castle was growing quickly, but widely held skepticism about the cleanliness and healthfulness of hamburgers concerned Ingram.

“The hamburger habit is just about as safe as walking in a garden while the arsenic spray is being applied,” wrote the authors of a cautionary book of that era about nutrition, “and about as safe as getting your meat out of a garbage can standing in the hot sun. For beyond all doubt, the garbage can is where the chopped meat sold by most butchers belongs, as well as a large percentage of all the hamburger that goes into sandwiches.”

Slyders only
Ingram resolved to convince a university researcher to put the healthfulness of hamburgers to a test. He found a taker in Jesse McClendon, Ph.D., a 49-year-old native of Alabama who had accepted a position in the University of Minnesota’s Department of Physiological Chemistry after teaching at Cornell University and Randolph Macon College.

Considered one of the most important figures in American biochemistry, McClendon was a talented researcher who had made his name studying the composition of hemoglobin, the mechanics of human digestion, the connection between dietary fluoride and reductions in tooth decay, and the effects of iodine deficiency. Experimentation on humans did not frighten him: He once had swallowed a bulky electrical device to measure the acidity of his own duodenum.

“He started out very enthusiastic about eating 10 burgers at a sitting,” notes his daughter, Deirdre Flesche, “but a couple of weeks into it, he was losing his enthusiasm.”

The White Castle project allowed the biochemist to devise a study that would influence public thought (as well as hamburger sales) for years to come. McClendon knew that earlier studies had shown that adult dogs fed for a month on only lean meat appeared to fare well, and that humans on temporary all-meat diets lost calcium and phosphorus but didn’t develop deficiency diseases. He planned to feed a single experimental subject only White Castle hamburgers — including the bun, onions, and pickles — and water for 13 weeks.

A willing subject presented himself: Bernard Flesche, a U of M medical student working his way through school. Flesche kept a diary during the ordeal. “He started out very enthusiastic about eating 10 burgers at a sitting,” notes his daughter, Deirdre Flesche, “but a couple of weeks into it, he was losing his enthusiasm.” His sister frequently tried to tempt him with fresh vegetables, but Flesche allowed nothing but White Castle Slyders (TM) to pass his lips.

Too much of a good thing
Flesche lasted through all 13 weeks of his White Castle hamburger binge. “The student maintained good health throughout the three-month period and was eating 20 to 24 hamburgers a day during the last few weeks,” fast-food mogul Ingram stated, adding that the research proved that customers “could eat nothing but our sandwiches and water, and fully develop all [their] physical and mental faculties.” McClendon’s study became a prominent part of White Castle’s advertising.

Flesche went on to practice medicine in Lake City, Minnesota. He died from heart problems at the age of 54. One immediate and chronic effect of his participation in the study: “He never willingly ate hamburgers again,” says his daughter.

Taken from the winter 2008 issue of Medical Bulletin, a publication of the Minnesota Medical Foundation.