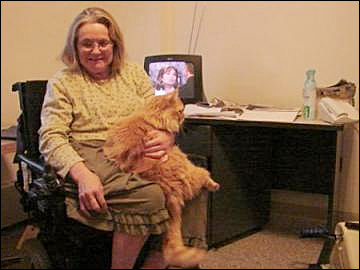 When a minor bladder infection landed Rachel Wilcox in a nursing home, it was almost her undoing.

Wilcox has had multiple sclerosis for more than 40 years and was living independently in St. Paul, but her health was getting more fragile and she was having falling spells. When she got the routine infection, she was very weak and could hardly sit up in her wheel chair, she said. She called 911, and went from hospital to interim care, and then a four- to five-month nursing home stint.

Wilcox, 62, didn’t feel she needed that level of care, but “they weren’t comfortable letting me go home to my apartment,” she said.

The nursing home experience affected Wilcox profoundly. She struggled to find anyone to talk to. Wilcox befriended a fellow resident who confided that if she had to live the rest of her life in the nursing home, she didn’t want to live. “And I had a hard time thinking of anything to say, because that is how I felt, too,” Wilcox said.

Relocation coordinators from the Metropolitan Center for Independent Living (MCIL), helped Wilcox, a former MCIL board member, find a safe spot to live. On Feb. 13, she moved into Central Towers, an assisted living facility in downtown St. Paul. Wilcox shares the unit with her cat, Sam. The skyways help her get to Wellstone Elementary, where she works as a foster grandparent.

There was a very human cost to leaving Wilcox in a nursing home and a financial cost—at least a short-term cost—to move her out.

Now the program that paid to move Wilcox and other people under 65 from nursing homes back to the community is getting cut as part of federal efforts to curb the deficit.

MCIL typically spends around $5,000 per relocation, and the cost is paid for through a special part of the Medicaid program.

A little noticed federal rule change that went into effect March 3 cut the relocation program. It was one small part of a much bigger rule change that affected payments for mental health services and child welfare programs.

Because the county is still legally responsible to provide the nursing home relocation services, the federal cuts could simply shift costs to county taxpayers. Or it could mean that services just won’t get done as well as they have in the past.

Maine and three other states have sued to block the rule changes, saying the Centers for Medicare and Medicaid Services (CMS) overstepped their authority. Some in Congress, including Rep. Keith Ellison, are working on legislation to undo the change.

The CMS media office did not return a call.

A program that worked
The U.S. Supreme Court’s 1999 Olmstead ruling said states should move disabled persons out of institutions and into the community, if those persons could benefit from the move and wished to do so. The decision allowed states to consider costs, too.

The program worked, Chamberlin said. In the early 2000s, the county had 1,400 to 1,600 disabled people under age 65 living in nursing homes. Today there are fewer than 700, and she attributes the drop to Targeted Case Management.

The case management is intensive. Relocation workers talk to client and family to find their preferences and discuss choices. They explore housing options, whether public housing, assisted living or an apartment. They line up community supports, such as nurses, personal care attendants or therapists. They get adaptive equipment, from ramps to trapeze bars. They work on insurance and other benefit paperwork. They take the client on site visits so that they are involved in making the choices.

In Hennepin County, county nursing home liaisons do some of the work. The county also contracts with outside groups such as MCIL for more time-intensive cases.

The Minnesota Department of Human Services (DHS) estimates that the program costs Medicaid approximately $800,000 a year and serves approximately 1,000 people.

The federal Targeted Case Management rule changes are shrinking the time allowed for workers to help people move. DHS estimates the rule changes will eliminate 40 percent of the current coverage, or $320,000.

The budget axe
Until recently, the program allowed the county and its contract providers to work with nursing home clients for up to 180 days to move them into the community, start to finish.

First, for people in nursing homes for more than 180 days, payments are reduced from 180 days to 60 days.

Second, for people in nursing homes fewer than 180 days, payments are cut to 14 days. (Wilcox was in a nursing home for less than 180 days. Her relocation took approximately 4 months. Someone in her position today would not get that level of service, unless the county pays for it.)

Chris Montville and Julia Washenberger, MCIL relocation staff, say housing issues alone can take months to resolve. Public housing waiting lists might run three to six months in the city, they said. In other areas, it’s longer. If a client has geographical restrictions, and is trying to move near family, it can slow the process.

An additional federal rule change restricts payments for service. Under the old rules, the county or a contractor would get paid periodically. Under the new rule, they only get paid if the client is successfully placed.

That means if the county or contracted relocation coordinator works with someone for six weeks and that person has a medical setback or changes their mind, the provider is out of luck: No placement, no payment.

David Hancox, MCIL’s executive director, said nursing home relocation—and the choice and independence it reflects—is important to MCIL’s mission. MCIL works with 15-20 clients at any one time. It takes an average of 112 days to get them relocated. That is 52 days longer than the federal program will pay for under the new rule

MCIL would try to continue providing services under the new rules, Hancox said. But it would not be able to afford too many cases where the government denied payments after the agency had delivered services to clients.

Saving money?
Hancox said his organization charges $72 an hour for relocation services. On average, relocation has taken 81.2 hours per client.

Do the math and that means the long-term savings from relocation needs to be at least $5,846 to offset the short-term costs. Since not all relocations are successful, the savings needs to be more than that.

Hennepin County’s Chamberlin said from January-November 2007, the county referred 140 clients for relocation services to five contracted vendors, including MCIL. Fifty-six were placed successfully and 38 were still receiving services. Of the 48 who did not complete the process, 16 changed their mind, eight died, four exceeded the 180-day limit, and six turned out to be ineligible. There was a smattering of other reasons.

MCIL staff said that while individual cases could cost more to move someone out of a nursing home to community care, overall relocation saves money. For Wilcox, it saves more than $100 a day to have her in assisted living rather than a nursing home, MCIL staff said.

Her move will pay for itself if she stays in assisted living approximately two months.

Antoinette’s story
It is impossible to tell the typical story of someone helped through Targeted Case Management. Each is different.

A brutal domestic assault left Antoinette “Ann” Koger with severe traumatic brain injury. Unable to move or communicate in any significant way; she lived in a nursing home for 5 years.

Tajuana Farley, Ann’s sister, felt strongly that Ann had a better chance of improving if instead of sitting alone in a dark nursing home room she had more family contact. Herself a personal care attendant, Farley wanted to bring her little sister home. But she had a hard time negotiating the bureaucracy.

“I did the paperwork,” she said. “They were sending me back and forth through Human Services. They said you can take her home but we can’t pay for anything,” because she is a relative.

The case was complex because of Koger’s health needs and the need to find a residence that worked for both sisters. MCIL worked for 175 days on the relocation.

Koger, now 42, has lived with her sister since 2004. She has a personal care attendant 14 hours a day as well as periodic nursing assistance. The cost of care at home is $259 a day, MCIL said. Because she left the nursing home several years ago, the cost comparison between home care and nursing home care was not easily available.

Farley said she takes her sister to the park and their mother’s house, and her sisters come to visit

During a recent visit to their apartment on St. Paul’s east side, Ann sat in her wheelchair, her eyes flicking back and forth rapidly. Her face changed expressions, but it was unclear what she was tracking. “She will laugh. She will say a couple of words. And then not say anything for a long time,” Farley said. “That is an improvement. We are still hopeful this whole thing will turn around.”

Trickle-down effect
Most contracted services have stopped taking cases in Hennepin County, and that means more work for county staff. The county also gets less reimbursement for its work under the new rules.

“To have the monies be limited certainly takes some of the wind out of the sail, but it doesn’t stop the service,” Chamberlin said. “We will provide the service as best as we can.”

As for Wilcox, she is eyeing new volunteer opportunities.

Based on her nursing home experience, she now wants to help with the nursing home relocation program. A long-time advocate for disabled people, she said she met nursing home residents who could live more independently.

And she knows what a difference the move can make.

Wilcox has survived MS, a divorce and even an Amtrak train derailment, she said, but those were nothing compared to the depression she felt in the nursing home.

“There was one gal who bellowed from morning to night, and sometimes all through the night, day after day after day,” she recalled.

When she moved into Central Towers, “It was like heaven. The first day I did nothing but sit and totally enjoyed the quiet,” she said.