Why simulators improve your health care 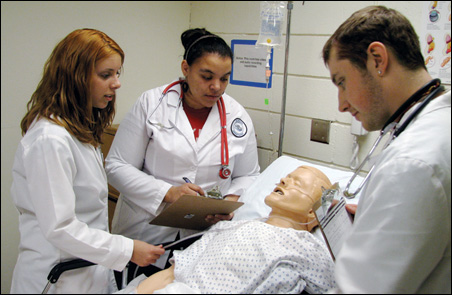 Those emergency room staffers who treated your heart attack or your car crash injuries might have honed their techniques on a dummy — not just any dummy, but a sophisticated patient simulator designed to polish their skills and make sure they’re ready to save your life.

Increasingly, nursing students, paramedics, doctors, nurses and other health care employees practice techniques and emergency treatment with patient simulators. In the past five years, several of the Minnesota State Colleges and Universities have joined forces with health care organizations to create simulation labs that provide opportunities for valuable learning. At least 16 of the system’s colleges and universities now have simulation centers and labs, and several others have simulation mannequins for their programs.

One advantage of simulators is that nursing students and medical workers can hone their skills without putting human patients at risk of pain and injury from medical mistakes by novices. Another advantage is the opportunity to practice treating medical problems that show up infrequently, especially in rural areas. And perhaps most important, they learn to better communicate and coordinate care for the patient.

Teamwork training critical for success
“A lot of it is teamwork — not only do you need to know the proper medications and procedures, but you need to know how to do those together,” said Deb Dubie, who participated in numerous simulation sessions before graduating in December 2007 from Ridgewater College, which has simulation centers on its campuses in Hutchinson and Willmar. She’s now a registered nurse in an assisted living facility in Bird Island, Minn.

Dubie said students see a big payoff from simulation practice. Last fall, Dubie participated in a simulated heart attack demonstration for state legislators visiting the college. “Then I told them this had happened to me when I was doing a clinical in a small hospital.

Someone came in and was having a heart attack, and everything that had happened in the ‘sim lab’ happened in that emergency room…. I was a student, and I was able to participate. My job was to get the nitro, but I could watch how everybody was working as a team.”

The patient simulators — ranging from basic mannequins to the “high fidelity” versions that can cost upwards of $200,000 — come in sizes from infant through adult. The top-of-the-line mannequins react realistically to almost every imaginable medical situation by answering questions, coughing, vomiting, saying “Ouch!” if a needle or tube is inserted awkwardly, and closing their eyes and resting under anesthesia.

“You treat them like you would a patient, holding their hand and talking to it,” Dubie said. In a simulation session, participants work together to decide on treatment, listen for abnormal breathing, thread tubes down a patient’s esophagus and inject medications, for example. Simulator mannequins can be programmed so that eyes dilate, blood pressure and pulse rates rise and fall, and, if treatment goes awry, they even may sink into a coma and die. Most simulation labs can record the action on cameras with audio so instructors and participants can critique their patient care decisions later and learn from their mistakes — a crucial phase of the learning. Debriefing, as this process is called, is essential to helping students really get it.

“You read it over in a book and talk it over in class — and then you go and apply it, and that’s where the learning takes place,” Dubie said. “If you apply it, you’re apt to retain it, and everything makes sense.”

Collaborations support simulation
Ridgewater College and Metropolitan State University led the way in 2003 as the first two institutions in the system to develop simulation centers, working separately but with similar concepts of collaborating with the medical industry. Since then, an increasing number of state colleges and universities have adopted simulators.

Industry support, along with state and federal grants, provides essential funding for startup, staffing and purchase of the latest technological advances. Ridgewater College’s nursing simulation centers on its Hutchinson and Willmar campuses were developed in collaboration with several medical organizations in the region. Each campus is equipped with a variety of mannequins, including the newest high fidelity simulators with self-contained computers. Lynn Johnson, director of nursing, said the college’s simulators include a “sim baby,” child and adolescent mannequins, and a birthing mother called “Noelle.” A baby “Newbie” is expected to arrive soon.

Metropolitan State University collaborated with HealthPartners, a nonprofit health care organization with clinics and hospitals across the Twin Cities area, to establish the HealthPartners Simulation Center for Patient Safety. The university offered administrative support and space on its St. Paul campus, and HealthPartners provided the sophisticated technology for the center, which it owns. State grants also support special training services for hospitals and clinics to handle hypoglycemia and pediatric respiratory emergencies, among others.

Gail Johnson, simulation center director, said 6,540 users have been trained by the center since it opened in 2003, including about 2,600 last year. Simulation builds confidence, she said, citing as an example a recent case where the center brought its simulation training to a clinic to teach how to treat hypoglycemia. A short time later, someone came in with hypoglycemia symptoms. “The people in the clinic felt they knew exactly what to do because they had practiced it,” Johnson said. “We’re also getting ready to roll out other initiatives, such as providing dental clinics with simulated learning on handling medical emergencies.”

Marilyn Loen, dean of the university’s College of Nursing and Health Sciences, said the center has trained doctors and nurses, anesthesiologists, paramedics, respiratory therapists, flight nurses and rapid response teams — personnel identified within a hospital to monitor change in a patient’s condition.

Laboratories launched with grants and donations
Riverland Community College opened a new Health Science Simulation Laboratory last year on its Austin campus with support from a $2.2 million U.S. Department of Labor grant. The center includes a mock-up of a real clinic, including a receptionist, waiting area, two examination rooms and a pharmacy. The lab and other programs and scholarships stemming from the grant are part of a consortium project that Riverland leads with Minnesota State College — Southeast Technical, Rochester Community and Technical College, and South Central College, along with workforce development organizations, K-12 school districts and medical facilities across south central and southeastern Minnesota. The Department of Labor recently awarded another $1 million grant to develop simulation training modules that can be produced as educational games and shared with long-term care facilities across the state to train employees.

Mobile simulation laboratories are next on the horizon. The Ridgewater College Foundation launched a campaign last year to raise $2.5 million for a mobile simulation lab that will take health care education and training to hospitals, schools and businesses in the region. When the vehicle hits the road later this year, it will contain a mock emergency room, mock ambulance bay and command center.

Others developing mobile labs include Hennepin Technical College, which plans a mobile emergency training simulation lab to serve its Advanced Center for Emergency Services. The lab will be housed in a 38-foot trailer with audio and video recording capability and space for debriefing sessions, said Jon Olson, manager of fire, EMS and safety services at Hennepin Technical College. The mobile lab, which will be ready to roll out this spring, will be taken to employer sites to train new and current health care workers and may be used at other colleges without medical simulators.

Last fall, the trauma drama day involved a catastrophic bus crash. Screaming parents rushed in along with youngsters and adults injured to various degrees; personnel had to decide who gets treated first. One of the mannequins represented the bus driver, who was drunk as it turned out. “We brought the Hutchinson (nursing) students to Willmar, where we can operate two ERs at the same time,” Lynn Johnson said. “The students came knowing what basics they need to function for the day, and they were given the details and their roles when they came.”

Other simulation scenarios have involved end-of-life situations with family members present and situations where the patients and family don’t speak English. “The types of patients we receive and the demographics are changing all the time,” Johnson said. “We have created scenarios where they cannot communicate, and the students have to develop cultural competence. We have students from other cultures who help us.”

Johnson pointed out that many of their students go to work in rural hospitals and don’t have the luxury of resources that larger hospitals have, so they must be able to think and perform under pressure as they prepare patients within a tight timeline to be transferred to major medical facilities. Ridgewater College has brought simulation into rural hospital emergency rooms so personnel can be timed in carrying out the protocol for a heart attack, for example.

“What happens in these rural hospitals is critical — the communication is critical and how the team works together,” Johnson said. Patient simulation technology has dramatically improved preparation for health care careers, education leaders say. “I was educated in the ’70s, and I would have benefited so much from this opportunity,” Johnson said. “Sometimes you can’t, as a student, be involved in real-life situations. You have to sit back and observe. Until you do something yourself, you don’t really understand. It’s overwhelming and scary.”

Much smarter than a typical dummy, SimMan is a computerized patient simulator primarily used by Lake Superior College’s nursing program. He has taken on a new role as Senõr SimMan, helping to teach health care students and professionals specialized Spanish language skills in a clinical setting.

Senõr SimMan not only talks but has measurable vitals including breathing, temperature and blood pressure. There are 30 million Americans whose first language is Spanish, and by the year 2010, one out of four Americans will be of Hispanic heritage. “Clearly, there is a growing need for professionals who work in life-and-death situations to expand or enrich their language and communication skills,” said Michele Keane, a Lake Superior College faculty member and Spanish instructor. “We’ve had health care professionals from all areas take this course. I’ve taught pharmacy students, nursing and EMT/fire rescue students, and even veterinary students,” Keane said.

During the semester-long course, students learn basic conversational Spanish and then move to specific medical terminology. Some students have studied Spanish before; others are new to the language. “We learn basic anatomy, and then we move into more graphic terms like nauseous, dizzy or anxious,” Keane said. “This type of vocabulary helps health care workers get a better understanding of how a patient is feeling.” Once students have the language basics down, they progress to practice their conversational skills on Senõr SimMan.

Nicole Verdugo, a student training to become an EMT/firefighter, recently completed the course. “I hadn’t heard of SimMan before, so I was interested to see how he worked. I was nervous because now

I had a ‘real’ patient, which meant that I had to check his pulse, watch and listen for respirations, and take his blood pressure. It made it more challenging that this patient was going to express his pains and feelings in fluent Spanish. Not only did I have to be an EMT, but I had to be a Spanish-speaking EMT.”

Students go “live” with Senõr SimMan, who is installed in an exam room separated by a viewing window next to a computer control booth. “The students would take turns talking to him. They didn’t know what I was going to have him say or do, so they had to be on their toes,” Keane said. “My students liked being tested on the spot.