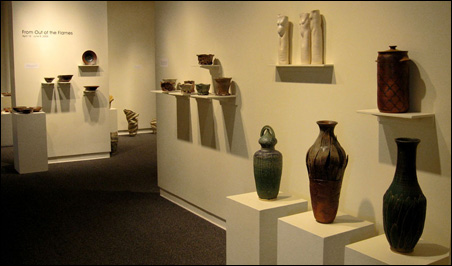 Writer Hannah Dentinger offers an eloquent investigation into the stylish, deft craftsmanship on exhibit at the DAI’s new show devoted to glass and ceramic art, “From Out of the Flames.”

I MET THOMAS MARMA, A PARTICIPANT IN THE DULUTH ART INSTITUTE’s new exhibition, From Out of the Flames, shortly after he moved to the area. To all appearances a scruffy college student, he carried something in the pouch of his sweatshirt that was about the shape and size of a Nalgene bottle. In fact, that’s what I assumed it was, until he pulled it out and it was revealed to be a vase he’d blown the previous evening, slender and elegant in intense purple. Marma’s colors are unabashed: blues and pinks touched with copper. A highlight here, though, is a shallow bowl in subdued green and brown overlaid with a milky webbing. The exterior swirls counterclockwise like a murky maelstrom in a pond full of algae and earth. The interior gleams like polished bronze.

Marma’s hands-on attitude towards his own (highly frangible) work seems to reflect a mindset characteristic of potters and glass blowers: they are, perhaps more than artists who work in other media, interested in the manual aspect of their work—in supplies, tools, and process. This is a point made by DAI curator David Hodges on a tour of the exhibition.

“Glass blowers become enamored with the process,” he explains, directing my attention to work by Bob Husby. “They make use of the way molten glass droops and sags. These pieces are an artifact of that process.” Indeed, each of Husby’s pieces seemed to crow: Look what glass can do.

Jim Sage co-owns a glass-blowing studio with Husby. In addition to glass, he works with metal. Sage writes of his fascination with these two very different substances: “I enjoy the adrenaline and focus that I experience in working with these materials at extreme heat levels” which “alter these rigid materials, changing their original shape, resulting in a final piece that, upon cooling, returns to its rigid condition in an altered form.” Sage’s work has the joie de vivre of Matisse’s collages: a decorative teapot is clear glass dotted with red, pink, and blue stains, and opaque white spots like snowflakes.

David Hodges points out that Sage and Husby have managed to generate new interest in glass in a region already known for skilled potters—many of whom feature in this show. Janis Andler has worked in the DAI studios for many years, producing finely-crafted small pieces (most are no more than 5″-6″ on a side). Painted floral and animal motifs vie with patterns stamped into the clay like purplish bruises. On one dainty pot, sky-blue fish with a delicate pink tracery of scales chase each other’s tails. In an amusing detail, the mouth of the pot forms the neck of a shirt with a turned-down collar and three buttons. Looking closer, you’ll notice a tiny pocket on either side of the pot.

Similarly sartorial, Linda Powless’ tubular vases are wrapped with flaps of clay that turn out like lapels on the front of a dinner jacket. Between the curling edges bloom growths, like ruffles on a shirt worn to a 1970s prom. Kim Whittaker’s instantly recognizable work, too, features joints cleverly disguised with clay rounds that resemble the woven leather buttons on a vintage peacoat.

Hodges notes that Whittaker’s work references the Chinese use of clay as a canvas: she paints “hipsters from the 1920s or ’50s—but here’s one with sunglasses. Maybe it’s the ’90s.” One wall-mounted platter has a pile-up of human faces at one end and a single visage peeking from the opposite rim.

Whittaker’s work, which Hodges points out takes traditional jardinière and teapot shapes, marries form with function—as does that of Anne Sterbenz-Duus, who describes her task with appealing straightforwardness: “to create functional pottery that enhances our daily lives.”

“I could mix pancake batter in this,” Hodges agrees wryly, indicating a large russet bowl with a green, brown and gold interior. But those adjectives suggest colors much surer of themselves than these tentative glazes. These are the hues of buds and tendrils, not summer leaves. On one side is a lip for pouring, on the other, a handle that grows as naturally from the side of the bowl as an ear from the head. A pattern of crisscrossed sprigs adorns the outer surface—black dabs like iron squeezed from a pastry tube.

Each of Sterbenz-Duus’ pieces complements its neighbor. The same can be said for what Hodges called the “tornado-cocoon-pods” of Margaret Kirtley-Sternberg. This series of large vases almost appears to have grown out of the floor overnight. The crenellated exterior of each piece resembles skinned musculature. Colors are muted. But when you peek inside the mouth of a vase, a translucent navy glaze has pooled in places.

Nothing if not muscular, Broc Allen’s large ceramic tubes, like blasted stumps, congregate in what the curator calls “a kind of garden. The series takes on a gracefulness that doesn’t hit you without seeing these pieces en masse.” A crystalline sparkle catches the light on certain surfaces, evidence, Hodges explains, of the “fierce activity that goes on in the kiln. Molten ash blown against the pot turns to glass.” On one piece, ash has hardened into a sea-green slick resembling a limestone deposit on a cave wall. Combined with the runic scratches and markings that scar his pottery, this reinforces the primeval quality that Allen’s blunt assessment of his preferred medium suggests: “I love fire,” he writes, “especially big fire.”

Glittering encrustations of ash-turned-glass contrast satisfyingly with matte clay in Allen’s work. The same can be said for Jane Fleeson’s disparate pieces. My favorites are two jars that look like Winnie-the-Pooh’s honey pots, decorated with drips. Variations in color and texture, tiny manipulations of the clay that skew symmetry, all demand a closer look, revealing minute grooves where the glaze collects.

Gail Rosenquist has adopted a style and, wisely, stuck to it, creating distinctive wood-fired vessels in shades of chocolate, mint and freckled cream. Scalloped rims mirror florid bases like the scrolls atop a Corinthian column turned upside-down. Appropriately enough, Rosenquist cites the Spanish architect Antonio Gaudi as an influence.

Tubes of porcelain molded into female forms are Roald Moberg’s contribution to the exhibition. Three smooth torsos—one with a pregnant belly—irresistibly call to mind the Venus de Milo. Slight differences in color were produced, according to Hodges, not by a glaze but by the placement of each piece within the kiln. The absent arms influence the torque of each torso and the way the breasts fall—the effect of the invisible on the visible. Small marks on the sides of the vases suggest fingernails pressed into the clay: the absent artist is also an invisible influence on what we see.

Perhaps this is what pottery can offer us that two-dimensional media often do not—the physical imprint of the artist on the work. The medium’s physicality is also linked to its practical function. Although not all the work in this exhibition is designed for use, each form is indebted to its original, utilitarian purpose. But then again, art has a purpose. It is a purpose.

About the reviewer: Hannah Dentinger writes on art and literature. She is also a scholar of medieval Welsh literature.

What: From Out of the Flames
Where: Duluth Art Institute, Duluth, MN
When: Exhibition runs through June 8, 2008
Admission is FREE and open to the public