A U grad student turns the ‘dismal science’ into performance art 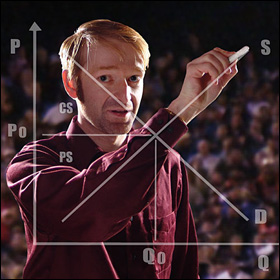 Photo by John Largaespada
Andrew Cassey stands behind a superimposed drawing with arrows and letters.

After passing around the syllabus, Andrew Cassey stands beside his portable green chalkboard. Before him, people chat with their seatmates. Few take notes, but they pepper him with questions on international trade. He answers with careful thought, scribbling each solution on the chalkboard.

Thing is, Cassey is not in a classroom full of students. He’s in Minneapolis’s Bryant-Lake Bowl performing his buzzworthy, once-a-month lecture series about economics.

Bryant-Lake Bowl, a place where you can bowl on old wooden lanes while eating organic bison and local Star Prairie trout, is also a cabaret, with a theater tucked away behind Lane 1. The theater becomes a kind of geek haven on Tuesday nights, with entertainment like Books & Bars (eat, drink, talk books), the Bell Museum’s Cafe Scientifique (eat, drink, talk science) and Cassey’s “Principles of Economics” lectures (eat, drink, …).

Cassey, a graduate student and instructor in the Department of Economics, conceived the notion of “economics as performance art” a year and a half ago during the Minnesota Fringe Festival, a Minneapolis-wide performing arts event. So he entered his idea in the lottery for the 2007 Fringe season and was chosen.

As one former audience member puts it, “Where else can you pay $8 and learn this much about economics?”

“I introduced him to people I work with,” says Paul, “but he came up with some great ideas.” To promote the performances, Cassey felt people would be more apt to pay attention to a cool-looking coaster, rather than the typical postcard. He was right. The Bryant-Lake Bowl show was packed.

Cassey’s performances are in the great tradition of the traveling lecture circuit common when Minnesota was still a territory, when erudite showmen talked about the latest scientific discoveries.

The distinction between teaching and entertaining can be a fine line, and for Cassey it’s mostly about speed and purpose.

“My job [as a teacher] is to show the tools we [economists] use to think,” says Cassey. And he must capture and engage 300 minds to do that, going slowly, and ensuring that students have time to take notes and digest the material. But the way he presents that material is anything but dry.

“He’s like Conan O’Brien,” says Anne Cain-Nielsen, one of his students. “A funny guy who happens to be talking about economics.”

When on stage, his performance must be lively, with entertainment as his goal. He needs to keep things moving quickly.

“People use economics every day,” he says, “whether they like it or not.” With practical applications in mind, he chooses his stage lecture topics. They range from international trade to game theory to foreign development–all issues people regularly encounter. He presents the economic theory behind current events, with the hopes of sparking debate. “My biggest fear is silence,” says Cassey. “I want people to challenge me.”

His next show is about monetary policy, and if you’re wondering, for example, how the World Bank influences the price of food on your table, come let Cassey clear that up for you. As one former audience member puts it, “Where else can you pay $8 and learn this much about economics?”