Except for the cybernetic helmet, the film is more fantasy than physics 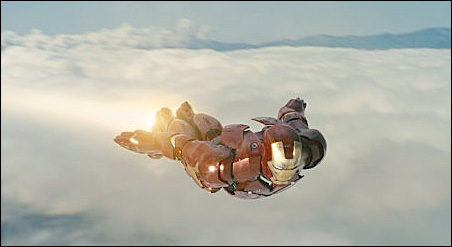 As a comic book fan and physics professor I am looking forward to the big screen debut of Iron Man. This is due, in part, to the fact that instead of getting belted with gamma rays or being born a demon from hell, industrialist and scientist Tony Stark got his super powers by means of his engineering genius.

But just how realistic is Stark’s amazing suit?

Sadly, nearly all of the features of the Iron Man suit, with one important exception, are not likely to be realized anytime soon. Let’s look at each of the suit’s major elements in turn.

Jet boots. The reason that we don’t fly to work using boot-mounted jets as Iron Man does has nothing to do with technology and everything to do with energy. We know how to achieve thrust and propulsion using personal jet packs, and a person can indeed fly from home to their place of employment like Buck Rogers or Adam Strange—provided they live 30 seconds from work. Lifting a full-grown person 100 feet into the air considerably increases their potential energy, and that gain in energy must come from the stored chemical energy in the jet pack.

Ditto for the energy required to zip around once airborne. Jet boots don’t make Iron Man an escapist fantasy, but the idea that Stark could store enough energy in his suit to fly for more than half a minute does.

Repulsor rays. Similarly, the directed energy weapons Iron Man uses, such as the “repulsor rays” built into the palms of his gloves, should require that Stark drag along a large power generator whenever he faces off against the Mandarin or Titanium Man. I’m not exactly sure what a “repulsor ray” is, but if it’s anything like a high-power laser, then the energy demands are considerable.

“To those trapped within unresponsive bodies, the development of a device that could ‘read their thoughts’ would trump the wildest adventures in any superhero story.”

Even assuming that Iron Man can convert any stored energy in his suit into laser light with 100 percent efficiency, generating a beam powerful enough to melt a fist-sized hole through a half-inch-thick steel plate (which any comic book fan can tell you is well within Shellhead’s capabilities) would require an energy pulse of over two gigawatts of power, greater than the output of a nuclear power plant.

Cybernetic helmet. There is one aspect of Iron Man’s armor that not only is scientifically sound, but may be available for our use someday soon: the “cybernetic helmet” Tony Stark uses to control the devices within his armor. When Iron Man wants to discharge his palm-mounted repulsor rays, he does not have to manually release a safety switch, enter a firing sequence code, or even pull a trigger–he just tells the supervillain to “talk to the hand” and fires.

In fact, Bin He of the Department of Biomedical Engineering at the University of Minnesota already has created a helmet much like Iron Man’s. It works on the principle that neurons’ electrical currents create electric and magnetic fields, which can be detected with devices such as the electroencephalograph (EEG). While the EEG has been around since the 1920’s, recent advances in signal processing have enabled scientists to isolate and identify the firing signatures of neurons associated with particular motor imagery tasks.

He identified the specific firing pattern that arises when a person, watching images on a computer monitor, tries to mentally move a cursor to the left or right. These detected frequencies can then be amplified and, when suitably modified, can instruct the computer to move the cursor in the same direction.

Of course, He is not interested in developing control helmets for crime-fighting superheroes, but hopes to develop devices that will enable people with paralyzing injuries to communicate more easily, or eventually to activate artificial limbs and prosthetic devices. To those trapped within unresponsive bodies, the development of a device that could “read their thoughts” would trump the wildest adventures in any superhero story.

James Kakalios is a professor in the School of Physics and Astronomy at the University of Minnesota and author of The Physics of Superheroes (Gotham, 2005).