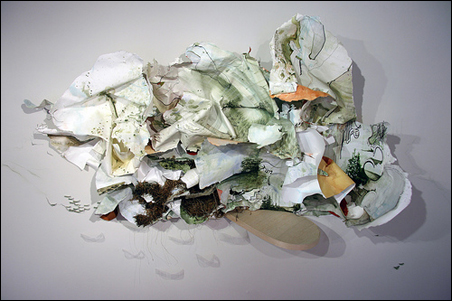 Critic Julie Caniglia weighs in on Rosalux Gallery’s annual group show, “Open Door,” which highlights work by artists outside the collective. She also notes the inherent problem in playing fast and loose with terms like “curated” and “juried.”

TRADITION DICTATES THAT SUMMER IS THE SEASON for group shows and juried exhibitions, smorgasbords that don’t demand too much of a gallery or its visitors. The latter can just ramble around town and pick up, in a casual way, on what’s happening on the local scene.

Rosalux Gallery, a professionally run collective of 25 artists, has just such a summer show, now in its fourth year and known as Open Door; for this annual juried exhibition, the collective invites submissions of work from non-member artists. It’s an admirable practice for the Rosalux artists to turn over their space to these outside artists every year, and I don’t want to quibble with terminology and exhibition protocol at the expense of addressing the actual art in this show, but … well, I kind of do.

Billing art exhibitions as “juried” when the jury consists of just one person—in the case of this year’s Open Door, it’s Walker Art Center assistant curator Yasmil Raymond—is apparently a common art-world practice. It’s also wrong. A jury requires, by definition, a group of people who, in choosing works for a juried art exhibition, likely bring different tastes to bear when making their selections; such differences lead them to discuss, debate, and probably disagree with each other in choosing works.

Perhaps compiling an actual jury is an art-world practice that has simply become compromised for lack of resources and time: there’s more art and less time than ever available to those in a position to show it. Consider, for instance, the Minnesota State Arts Board, which convenes panels of “advisors” to debate the merits of its grant applications and, over a two-day period, ultimately select the recipients. It’s an unwieldy and, needless to say, quite time-consuming process. With limited resources (and whose aren’t limited?), it’s much more pragmatic to appoint a single juror, i.e. a judge, to make the selections.

So why is a single juror/judge not simply billed as a guest curator? Because selecting artworks from a limited pool of submissions (with “juried” exhibitions, anyone meeting certain requirements can submit an artwork, usually for a fee) does not exactly qualify as “curating,” either.

Why does any of this matter? Basically, Open Door and many other similar art exhibitions end up conflating the two formats, creating a hybrid of the juried exhibition and the show organized by a guest curator. In the interest of assembling the strongest possible resulting body of work, organizers really need to choose one or the other. When artists submit work to a show organized by a jury-of-one, the chance that their work will be appreciated and selected – let alone considered, discussed, or noted in a juror’s mind for future projects – is greatly diminished.

So, why couldn’t the Rosalux collective convene a true jury by soliciting three or more qualified people from the local art scene each year? I would guess that, besides the time and resource constraints already mentioned, here in the Twin Cities, galleries could also be concerned about too quickly depleting the pool of qualified people willing to serve as art jurors. You can’t repeatedly hit up the same people to do this work, even if there is an honorarium or stipend involved. After all, serving as an exhibition juror is work, and most art-world types are already overworked and underpaid, perhaps even more so than the rest of us.

So, having used a fair amount of this space to discuss what juried exhibitions like Open Door ultimately say about the economics of the art world at large, I’ll move beyond my quibbles with terminology. For Open Door Raymond selected work from fifteen artists (Rosalux received more than 200 submissions), and the resulting assemblage succeeds in offering a sense of what’s compelling on the local scene, and it’s seasoned with some fresh discoveries as well. (It’s worth noting that Raymond also has an advisory role in another show that aims to I.D. the local scene’s best and brightest, the upcoming Pay Attention: Greater Minneapolis 08 at the Soap Factory this September.)

You have to wonder if Raymond intended to send a message by installing Greg Carideo‘s Gray to Black (Object to Image) at the entrance to the show. It consists of a shirt worn by gallery security staff at Raymond’s workplace, the Walker Art Center, which has been stripped of much of its weave—the horizontal gray threads; a negative photographic image of the garment hanging adjacent to it on the wall; and on the floor, a pile of threads from the shirt. A common shirt worn as a uniform becomes something that a designer might put on the runway in Milan. The installation’s title itself speaks to the idea of art guards serving, not just as security, but as artistic fixtures themselves within the gallery.

On the gallery’s second floor, Jennifer Danos‘ two architectural interventions make a complementary statement about viewing the apparatus of the art world as artwork (these pieces also fit in well with the aesthetic of the gallery space itself, whose architects have been lauded for using materials from the original building in new ways). Danos has installed two chunks of walls one plays off a freestanding gallery wall that is backed up against the staircase, while the other slides out slyly from a corner at the back of the gallery, where you can’t help but view it in juxtaposition with a door bearing a red “no exit” sign.

As with many (juried) group shows, the number and range of works in Open Door is too large to give them all their due here, but suffice it to say that such abundance is the very quality which makes it worth a visit. In brief, the works from Caroline Kent and Luisa F. Garcia Gomez show that there’s still a vogue for drawings done in a child-like or adolescent mode. Chad Rutter offers a clever farm-to-table statement about American food production with paintings of agricultural fields and field lots done on fast-food wrappers (some wrappers, on second glance, turn out to be meticulously produced parodies).

With Peeled Drawing and Whose Protection of the Trough Was Selected Scenes and Sediment, Janet Lobberecht and Gregory Euclide respectively reveal themselves to be adept at tearing apart their own drawings to create something fresh—Euclide does so in a particularly exuberant and innovative fashion. In addition to photography from Sarah Christianson and Matt Bakkom, there are Jen Nevitt’s lush, sexually allusive ink-and-graphite drawings; you’ll find sculptures from Tim Roby that look like handmade, large-scale versions of plastic parts (a rock, some fencing, a sled-like object) which were long ago separated from some complicated, but cheap, plastic toy. Mark Fisher applies electric currents and colored foil to paper with inventive results; and a sculpture and drawing from Aaron Van Dyke seem high-concept even as they let you feel you’re in on some joke.

Finally, you have Tony Sunder‘s intriguingly cryptic Black Paintings installation, which includes cases of Black Label beer (some of them painted black) sitting atop a handmade pallet (more wry commentary on art-world apparatus-as-art) and two black TVs, one of which is playing an old SNL skit with Dan Aykroyd doing Julia Child (television as painting?). But what caught my eye most was the flyer taped to the side of this TV: it’s a solicitation for artwork from a “gallery bffxxxddd”—yet another “open call” for material from an ever-growing pool of artists. “gallery bffxxxddd” seems to be mostly or wholly fictitious and, in that sense, is perhaps part of some larger project of Sunder’s. The “gallery” is also, as noted on the flyer, “in its fifth year as a supporter of new and upcoming work.” Indeed, aren’t we all?

About the author: Julie Caniglia is a freelance writer in Minneapolis and the former editor of The Rake magazine. In addition to The Rake, Caniglia’s arts writing has appeared in Artforum, Salon.com, Metropolis, I.D. Magazine, Harper’s Bazaar, and other publications.

What: Open Door 4
Where: Rosalux Gallery, Minneapolis, MN
When: Exhibition runs through June 29, 2008
Admission is FREE and open to the public