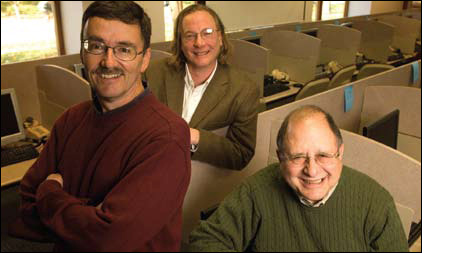 Steve Frank already knows why you’re going to vote the way you will when you go the polls this Nov. 4. The self-confessed political junkie and St. Cloud State University political science professor has been studying Minnesota voters for more than 20 years. He is the faculty founder of the St. Cloud State University Statewide Survey, an eagerly awaited and consistently accurate barometer of Minnesota elections and public opinion.

In 1998, the St. Cloud State University Statewide Survey was the first to recognize the political strength of an exprofessional wrestler named Jesse Ventura, who went on to win a surprise victory over two better-known, well-financed candidates. More recently, the survey was the first to find that a slim majority would be willing to pay a nickel-a-gallon gas tax increase — but would not be inclined to favor a dime-a-gallon increase. That finding factored into debate over the gas tax in the 2008 legislative session.

The statewide survey, conducted every fall by St. Cloud State students, has its roots in an assignment Frank wanted to give his political science class. “Most political science textbooks, in a chapter on introduction to public opinion, say, have your students do a survey. I decided, if I’m going to do it, let’s do it right. And I found out that my skill set was not quite where I wanted it to be.”

To remedy that, Frank, who already had his Ph.D. in political science, spent two summers at the University of Michigan’s survey research center as a visiting faculty scholar. By 1980, he felt ready to have his students conduct the first poll. Back then, students did their calling at night from faculty offices. They used paper-and-pencil surveys to collect data, which then would be entered into computers for analysis. “It wasn’t the best,” Frank said. “Maybe two or three weeks later you’d see some results.”

Survey goes high-tech
Today, the survey has its own space, with 19 calling stations outfitted with sophisticated computers equipped with computer-assisted telephone interviewing software in which responses are entered directly into the database. Supervisors can monitor results as they come in. The software also tracks how many attempts have been made to reach respondents in the sample — students will call each phone number up to 12 times, leave messages on answering machines and make appointments to talk.

The computers, phones, servers, printers and technical support services are paid from the $80,000 to $100,000 in revenue that the survey operation generates every year.

For students who participate, the poll provides an opportunity to gain experience they normally wouldn’t get until graduate school. Each year, about eight student directors are selected to help develop the questions and conduct the poll. Many, said Frank, have gone on to stellar careers. “Many say the survey was the kind of experience that helped them get into grad school or get jobs or the kind of experience they normally wouldn’t have gotten. Some of them are engaged in survey research and make more money than I get.”

Mike Loehlein, 21, an economics and international relations major from St. Joseph, said serving as assistant lead student director is giving him experience to use on his résumé or graduate school application. “Operating within the economics field, a lot of data is collected through surveys,” he said.

Over the years, Frank has accumulated a substantial amount of wisdom about politics and polls. For example, a candidate’s stance on the issues generally plays a very small part in the decisions voters make. What matters most to voters on election day, he says, are two things: party and personality. Republicans generally vote for Republicans, and Democrats vote for Democrats, but the personality of the candidates also plays a role. Frank says it’s as simple as asking yourself: Do you feel comfortable with this candidate? Do you like that person or not?

“One of the reasons George Bush won was that he was a better candidate than John Kerry, who came across as aloof and not somebody you could have a beer with over the fence,” Frank said.

Students also conduct a spring survey of St. Cloud State students and conduct surveys for government and nonprofit organizations on a contract basis. One steady client has been the Minnesota Lottery, which has commissioned an annual survey for the past 14 years. Don Feeney, research and planning director for the lottery, calls the St. Cloud survey the “gold standard” of gambling surveys. “Their technical standards, their data quality and their methods are state of the art,” Feeney said.

Fall survey anticipated
The fall statewide survey is what generates the most attention. That survey made news in the 1998 governor’s race when it recognized the public opinion strength of Jesse Ventura over rivals Norm Coleman, then mayor of St. Paul, and Hubert “Skip” Humphrey III, then state attorney general. “There was a certain amount of luck in that,” Frank admits. Again, Ventura’s personality seemed to be a deciding factor in the voters’ minds.

“We found that people kind of liked Jesse,” Frank said. “At that time, Norm Coleman and Skip Humphrey were not particularly good or strong candidates. They would spend their time attacking each other — kind of bitterly — in all the debates. Jesse came across as fairly reasonable; he would call the other two the Crips and the Bloods as they were going after each other. They had eight statewide debates, and he came across in a suit and tie as fairly reasonable.” Frank later co-authored a book about the Ventura phenomenon with Steven Wagner, chair of the university’s political science department, one of four faculty directors of the poll. The book is titled We Shocked the World: A Case Study of Jesse Ventura’s Election as Governor of Minnesota.

Jack Coffman, former political reporter for the St. Paul Pioneer Press, remembered the controversy after the 1998 survey was released shortly before the election. Other polls, some taken by campaign organizations, had shown Coleman and Humphrey in a close race with Ventura a distant third. “Everybody tried to find some fault with that poll, and there wasn’t any,” he said.

Planning for the statewide survey begins in the spring. Activity becomes intense when students come back to school in the fall. The survey is integrated into classes in research methods, public opinion and public budgeting; students in those classes conduct the survey.

Wagner said the survey livens up what might otherwise be a pretty dry class on public budgeting. Not only do students work on the questions, learn about poll methodology, do the calling and analyze the data, they also learn how to present their data to the media. “Something usually ends up in the newspapers, so it’s pretty cool,” he said.

One unusual feature of the St. Cloud survey is what Frank calls the “feeling thermometer.” It measures two things — whether people know the candidate well enough to rate him or her, and how they feel about the candidate on a scale from 1 to 100. A score over 50 means the person being surveyed feels warm and favorable toward the candidate and is probably likely to vote for him or her.

Accuracy depends on quality of sample
Key to the survey’s success is the quality of the random sample of phone numbers. In a true random sample, Frank said, everybody who is a Minnesota resident over age 18 who has a telephone has an equal chance of being selected. The survey usually interviews 600 to 700 people, which results in a poll that is accurate within plus or minus 4 percentage points.

One of the poll’s largest expenses is a purchased sample generated by random digit dialing — essentially a computer generating phone numbers at random. A printed directory would miss new phone numbers — especially of apartment dwellers and college students — and unlisted numbers. In the Twin Cities, the proportion of unlisted phone numbers is 25 to 30 percent, high enough to be statistically significant. Cell phones are not yet a problem for pollsters, but Frank said that could change. At the moment, only about 7 percent of Minnesotans use a cell phone exclusively with no land line. Though that tends to be younger people, Frank doesn’t believe they are statistically different from the rest of the population.

As voters approach the November election, Frank’s advice is to be wary of opinion polls. “I know this is a broad statement, but I would venture to say 95 percent of the polls that you see made public are probably garbage.”

Two clues are tip-offs that a candidate knows he or she is in trouble. The first is a candidate who offers to share part of a poll or survey but won’t share the whole thing. That could indicate that a part of a survey, taken out of context, looks favorable for the candidate while the survey taken as a whole might show something very different, Frank said.

The second clue is a candidate who says, “The only poll that counts is on election day.” When a candidate says that about a finding in the St. Cloud survey, Frank says, “Then I know we’re right.” For more information about the survey, go here.