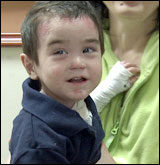 Photo by Jacob Portnoy
Nate Liao is improving after University physicians treated him with stem cell therapy for a rare and fatal disease.

For toddler Nate Liao, the slightest touch and every bite of food was painful. Nate was born with recessive dystrophic epidermolysis bullosa (RDEB), a genetic disease that causes skin and the lining of the digestive tract to slough off. In young adulthood, it leads to an aggressive, inevitably fatal skin cancer.

In October 2007, Nate got a chance at a normal life when doctors at the University and the University of Minnesota Children’s Hospital, Fairview gave the Clarksburg, N.J., boy, now a 25-month-old, an experimental umbilical cord blood and bone marrow transplant. Since then, he has shown dramatic improvement.

“We have established a new standard of care for these EB patients, beginning with Nate,” says John Wagner, the lead University of Minnesota Medical School physician for the clinical trial. “Nate’s quality of life is forever changed.”

Children with RDEB lack an essential connective tissue protein called collagen type VII, which anchors skin and the intestinal tract lining in place. In RDEB, these tissues are exquisitely fragile; tearing and blistering occur with minimal friction, and coughing and vomiting often tear the lining of the esophagus and stomach.

The children must have their entire body continuously wrapped in bandages to prevent damage. Malnutrition is a concern, and many require feeding tubes.

In collaboration with Angela Christiano, professor of molecular dermatology and genetics and development at Columbia University Medical Center, and investigators at Asahikawa Medical College (Asahikawa, Japan), and Jefferson Medical College in Philadelphia, University of Minnesota researchers Jakub Tolar and Bruce Blazar discovered that certain stem cells found in bone marrow could correct the biochemical defect in RDEB in a mouse model of the disease. Marrow-derived stem cells greatly lengthened the life expectancy of the mice and healed existing blisters. Further testing by Columbia demonstrated that for the first time, these mice were producing collagen type VII and structures called anchoring fibrils, which bind skin to the body.

“I have watched Nate improve every day. It has been slow, but I believe we are on the road to him getting better,” says Theresa Liao, Nate’s mother.

This is the first time physicians have approached the treatment of RDEB from a systemic perspective, using marrow-derived stem cells from a healthy donor to correct the underlying genetic defect. With the infusion of stem cells, new cells that produce the missing collagen type VII are generated throughout the body.

Nate received marrow- and umbilical cord blood-derived stem cells and progenitor cells from his healthy, tissue-matched brother. Over the next six months, the skin and lining of his intestinal tract slowly improved, and skin biopsies on days 60, 130, and 200 showed more and more collagen type VII.

By day 130, Nate’s skin and intestinal lining were beginning to show clinical signs that his skin was anchoring to his body. And he has begun doing things most toddlers and their parents take for granted—eating a snack, for example.

Since this has never been done before in people—researchers only have experience in animal models of the disease—doctors are not sure what to expect in the future. Nate’s skin is looking healthier, but he is still mostly bandaged and does still get wounds—but not as frequently or easily as before.

“I have watched Nate improve every day. It has been slow, but I believe we are on the road to him getting better,” says Theresa Liao, Nate’s mother. “[His improvement to date] has made a tremendous impact on our lives.”

Based on the success seen in Nate, Wagner will enroll additional RDEB patients into the clinical trial. Jacob Liao, a brother of Nate who also has RDEB, received an unrelated donor cord blood transplant May 30. It will be several months before the results of that transplant are known.

Using private donations made to the University of Minnesota EB Fund and the Children’s Cancer Research Fund based in Minneapolis, research is already underway to improve upon the existing therapy and to broaden the approach to other forms of EB and other collagen-based diseases. More information on the clinical trial is available on the University epidermolysis bullosa Website.

Watch a video of Nate, his mother, and Dr. John Wagner.