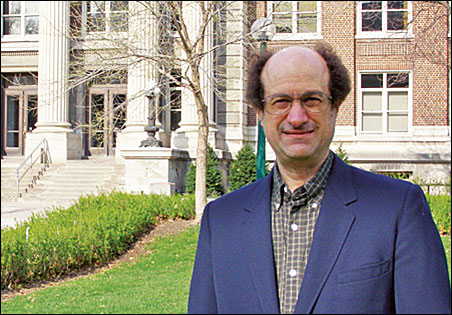 Courtesy of the University of Minnesota
Prof. Dan Boley is helping figure out ways to turn bacteria into a tool for increasing ethanol production.

When most people think of E. coli bacteria, the fear of food recalls and intestinal illness commonly come to mind. But University of Minnesota computer science professor Dan Boley is using his mathematical expertise to aid chemical engineers in looking for ways to turn the bacteria into a tool for increasing the production of ethanol, a biofuel becoming an increasingly popular alternative energy option.

Bacteria, such as E. coli, depend on a large number of different pathways, each of which produces a different compound — CO2, for example, or ethanol. “Mathematically each one of these pathways is a chain of chemical reactions,” Boley said. His job is to try to expand the analysis of ethanol pathways in the bacteria, so that researchers can alter the organism to increase the pathways that make ethanol and block the ones that don’t.

U of M chemical engineering professor Friedrich Srienc, in the U’s Bio Technology Institute, said this ethanol project is one aspect of a larger research effort started many years ago focused on metabolic engineering, in which he is also exploring biopolymers and biodegradable plastics. Boley joined this project two years ago through a grant from the University’s Digital Technology Center, with the goal of developing computer algorithms that can handle larger, more complex networks.

Srienc said he hopes Boley’s participation in the ethanol project will help to identify the principles to extend the analysis of the pathways in more complex networks. Doing this, he said, could allow for applications to a variety of areas. For example, he said one could use this to optimize the production of a metabolite or produce a specific product using biotechnology.

Solving modern problems with classical math
For Boley’s work on this project, chemical engineering researchers provide him with the E. coli networks to study. Boley, who specializes in numerical analysis, linear algebra and computational methods, then uses algorithmic and theoretical analysis to parallelize the algorithms to handle even larger networks. “They want to look for all the elementary paths through this network,” he said, adding that it’s his job to find them efficiently.

Boley said the mathematical issues posed by this project can be traced back to similar problems studied by classical mathematicians, as far back as Jean Baptiste Joseph Fourier in the early 1800s. “The problem is related to issues in computational geometry and linear programming,” he said.

By using his mathematical expertise, Boley has been able to find ways to more easily identify path combinations. “If you are given a path, you can tell if it’s a combination of other paths without computing all of them,” he said.

Once the algorithms for analyzing network pathways are identified, Boley’s work on the project moves to the hands of two talented graduate students, who tackle the problems with software and chemical engineering.

Pathway manipulation
Graduate student Dimitrije Jevremovic came to the University from Serbia in 2007 to work on his doctorate, focused in bioinformatics, in the Computer Sciences & Engineering Department. He began working on this biofuels project in August 2007.

Jevremovic’s work on this project involves developing a software program for a supercomputer. He said the program is used to analyze the metabolic networks and help chemists compute pathways of very large metabolic networks. The software will run on computers at the Minnesota Supercomputer Institute and the IBM Blue-Gene supercomputer in Rochester, Minn., where IBM has generously allowed U researchers to test it on models and evaluate the results.

Jevremovic’s work is supported by a Traineeship Program award through the University of Minnesota’s Biomedical Informatics and Computational Biology program, which aims to establish an academic and research center in Rochester, and an interdisciplinary, all- University graduate program in Biomedical Informatics and Computational Biology.

Cong Trinh, a chemical engineering graduate student working under Srienc, started work on the project in 2007 as part of his thesis. Trinh uses the algorithm results to decide how to modify the bacteria in the lab. Srienc said Boley found a new interesting way to classify pathways that he hopes to use when studying large networks.

Trinh said it is complicated work, but the goal is to use metabolic engineering to modify the organism to boost the production of desired products, such as ethanol. A central E. coli network can have close to 60 reactions leading to over 40,000 viable pathways. He said that Boley’s pathway identification helps refine the metabolic engineering process. “After knowing those existing pathways, we can find the best,” he said.

Trinh has been successful so far. “We have generated strains where we have optimized cell growth using this technique and increased cell growth,” Srienc said. Boley estimated the increase at close to 30 percent.

Trinh said that the mathematical work involved in the project is very challenging, but has proved to be extremely helpful in meeting the goals of this project. “Professor Boley is an expert in this kind of linear algebra,” he said. “I am impressed by the results we developed to unify the areas to solve the problems.”

Given the nature of the project, the interdisciplinary collaboration with computer scientists has been crucial. “The way that they approach the problem is from a completely different point of view,” Trinh said. “This collaboration in that sense is extremely useful.”

This story appeared in the University of Minnesota’s Department of Computer Science & Engineering Summer 2008 newsletter, Soundbyte.