Four men sitting at a downtown Minneapolis coffee shop recently told me a story that sounded too far-fetched to be true.

Could a humanitarian crisis following the pattern of Darfur, Sudan actually be unfolding while capturing hardly a second of the world’s collective attention, or Minnesota’s?

Even worse, could it actually be true, as these four Minnesotans insist, that this unimaginable massacre is substantially being sustained by U.S. tax dollars and moral support?

Is it possible that entire African villages are being wiped out Darfur-style by marauding helicopter gunships belonging to a close American ally, and that new refugee camps are being formed virtually overnight, as we speak, thanks to Uncle Sam?

Superpower Struggles
This sounded like the vilest strain of anti-American propaganda. But after a few hours speaking with these gentlemen, and doing a few more hours of research and checking, their story seems all too definitely, tragically, true.

The four men are in an ideal position to know. They are members of Minnesota’s community of immigrants from Ogaden, Ethiopia – a Montana-sized patch of desert that has been the scene of global superpower struggles for several decades.

Every day for the past several months, these four men, along with hundreds of other Ogaden immigrants in Minnesota, have spent hours every week on their cell phones talking to loved ones who give them seemingly endless direct eyewitness accounts of crimes and horrors in a war zone. 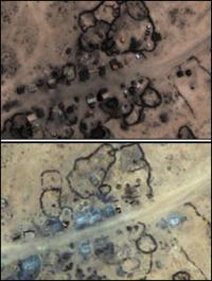 The Ethiopian village of Labigah in 2005 (top) and 2008 (bottom), showing evidence of Ethiopian Army destruction of villages.

“We hear about mothers being forced to betray their own sons to the Ethiopian Army, of fathers being handed guns and ordered to kill their own sons on the spot or to be killed themselves,” one of the men said.

Minnesota spies
“Every Ogadeni in Minnesota has friends or family who have been jailed, tortured, or killed. It seems there is no end to it. We could tell you stories all day for a whole week and still have more stories to tell you.”

The men asked that their names not be published, because they said Ethiopian government spies live in Minnesota who would help the Ethiopian authorities hunt down their family members in Ogaden to jail them, torture them or worse as a punishment for talking with the press.

Having the second-largest population of refugees per capita of any U.S. state (after Florida), and probably being the nation’s top state in diversity of refugees, Minnesota has once again become an early-warning system for crimes against humanity being perpetrated in a faraway country – this time in eastern Ethiopia.

Ethnic Somalis
About a fourth of the state’s Ethiopian immigrants are from Ogaden, whose natives, in contrast to Ethiopia’s majority Amharic-speaking Christians, are Somali-speaking Muslims. And therein lies the problem.

For decades, ordinary Ogadeni herders and farmers have lived on a literal battlefield over which Ethiopia and Somalia, acting as proxies for global powers, have waged an epic-length conflict.

The Ogaden landscape today is littered with the hulks of tanks and rusting weapons used in battles since 1948. That was the year that Britain, then the region’s dominant global power, ceded Ogaden to Ethiopia, even though nearly all of its five million inhabitants are ethnically and culturally Somali.

During the Cold War period, the region’s global powers were the Soviet Union and the United States.

Minnesota’s challenge
Today, the great global struggle being waged locally is the “War on Terror.”

Official U.S. foreign policy holds that the Horn of Africa is one of the world’s top breeding grounds for radical Islamist terrorists.

An Islamist governnment in Sudan, plus a powerful Islamist faction in Somalia with the likely support of nearby Eritrea, have led to the U.S. embrace of Ethiopia as a close ally in the War on Terror — it being “the only democratic nation in the Horn of Africa.”

If Ethiopia is a democracy how come thousands of its citizens are fleeing as refugees and asylees to our state, insisting Ethiopia is a tyranny?

A report published last month by Human Rights Watch lends credence to the horrific stories told by the four Ogadeni men at the Minneapolis coffee shop.

87 Villages
The report’s title, “Collective Punishment,” refers to the practice of wiping out villages based on rumors that insurgents live there. The report’s subtitle is “War Crimes and Crimes Against Humanity in the Ogaden.”

Despite Ethiopia’s attempts to block information about human rights crimes from escaping the Ogaden, Human Rights Watch said it had received reports of  “at least 87 burnings and forced displacements of villages, many of which involved extrajudicial killings, torture, and rape across numerous areas of the Somali Region,” meaning the Ogaden.

Since the late 1970s, when Ethiopia and Somalia waged a conventional war over the Ogaden, between two and three million refugees have poured out of region into neighboring Somalia, Kenya and Djibouti – and then onwards to a global diaspora including Minnesota.

In the most recent violence, tens of thousands of Ogadenis have already been displaced, and an Ethiopian economic and aid blockade threatens to escalate the humanitarian catastrophe by orders of magnitude as a result of drought and famine, Human Rights Watch said.

“The situation is critical,” the report says.

Moral Hazard
As for the question of funding, the U.S. is the largest single source of foreign military aid to Ethiopia. Moreover, total U.S. military aid to the country increased dramatically after 9/11, when Ethiopia became a close ally of the U.S. in the “war on terror.”

According to the Center for Public Integrity, the U.S. provided $16.8 million in military aid to Ethiopia in the three years following 9/11, compared to $928,000 in the three years before 9/11. That is a small percentage of Ethiopia’s annual $300 million defense budget, but critics say that unofficially, U.S. support of Ethiopia and its military is far higher.

Overall U.S. assistance to Ethiopia totaled $474 million in 2007 alone, according to the U.S. Department of State. Including other major sources of foreign aid, especially the UK and the European Union, Ethiopia receives almost $2 billion in aid annually.

“Americans are also a victim in the Ogaden,” one of the men in the coffee shop said. “Do they know their tax dollars are supporting a tyranny like this? If they knew, wouldn’t they want it to stop?”

Douglas McGill has reported for the New York Times and Bloomberg News—and now reports global/local news from Minnesota. His website is The McGill Report — Media for Global Minnesotans.

CORRECTION: In this story’s original version I bluntly characterized the government of Eritrea as Islamist, which was incorrect and misleading. The Eritrean government is composed of members of the country’s sole legal political party, the People’s Front for Democracy and Justice, which follows no formal ideology. Yet in 2007, the U.S. and the U.N. both accused Eritrea of providing weapons and support for prominent Islamist factions in neighboring Somalia, as part of Eritrea’s long-running conflict with its neighbor, Ethiopia. Strong evidence has been offered to back this claim. Nevertheless, as I said, the PFDJ is not formally aligned. And it remains even more emphatically true that average Eritreans, who have their own problems with their government, suffer for having the “Islamist” label unfairly tagged onto their entire nation by a U.S. government that is following its own “War on Terror” propaganda campaign. I’m sorry that my original wording sounded like that tag.