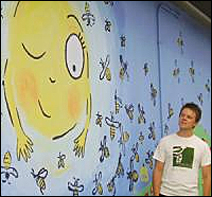 Erik Espeland prefers a rag and a can of paint remover. “Since late April or the beginning of May, we’ve cleaned up graffiti on Lake Street, from the Target store at the Minnehaha Mall to West River Road, two or three times,” said Espeland, who counts on about 30 volunteers. With direction and some funding from the City and from Longfellow Community Council, Espeland, who calls his group REMOV (Removing Existing Marks of Vandalism), says that high visibility areas that were a problem before are getting better.

Eric Gustafson picks the paint brush. “About a year and half ago we started a huge mural project to get the whole community involved—especially at-risk kids,” said Gustafson, assistant director of the Corcoran Neighborhood Organization (CNO), who says that groups totaling some 400 volunteers—mostly youths—have completed 12 community murals in the Corcoran Neighborhood as deterrents to local graffiti artists, or taggers.

Both Espeland and Gustafson have spent a good deal of their time in the last months trying to wipe out the graffiti problem on the Southside—or at least discourage it with more attractive alternatives.

“We’re getting to the point where almost every alley in our neighborhood has been covered,” said Gustafson. “Taggers want a big open space and a mural takes that away. Plus I think the gangs who are responsible for a lot of the graffiti tend to respect work that comes from the community,” Gustafson said.

With a City graffiti prevention grant of $10,000, Corcoran has identified the neighborhood’s major graffiti hot spots–more like “hot corridors,” according to Gustafson. The neighborhood group has also recently received $2,000 from the “Graffiti Hurts” grant program sponsored by paint manufacturer Krylon Products. CNO has also published a graffiti prevention brochure, advising residents on how to deal with unwanted tags by offering crews to help property owners paint over graffiti and by suggesting graffiti prevention techniques like improving lighting, covering walls with vines or flowering plants and, of course, the mural option.

“We did a great mural project a few Saturdays ago,” said Gustafson, “near Lake Street and Longfellow Avenue, where most of our volunteers were Latino kids that lived on the block.”

“People see us on the street and ask to be put on,” said graffiti removal guerrilla Espeland, about the offers to help he gets from locals who see him and his crew on the street every other Wednesday with their orange vests and paint remover. Espeland has become a regular fixture on Longfellow avenues, having ventured three and half years ago into a campaign that the Longfellow Messenger in 2005 called “a passion for removing the graffiti.”

Applying a grant of some $5,000 from the City, Espeland also helped direct at least three mural projects—covering vulnerable space at Minnehaha and 40th, at Lake and 41st and at Minnehaha and 33rd. Twin Cities artist, scenic designer, painter and performer Faith Farrell created designs for the mural projects and volunteers. Again, mostly local youths did the painting.

While Erik and Eric soldier on in the war against graffiti, there are signs that more help is on the way, and that their efforts have not been in vain. “The Corcoran Mural Project was awarded with Council Member Gary Schiff’s ‘Neighborhood Project of the Year’ this February,” said Gustafson. “I was really surprised because we were competing with projects from throughout the 9th Ward,”
he said.

“Driving up Lake and Minnehaha I’ve asked, ‘Did anyone see any tagging,'” said Espeland. “Most I talked to said they hadn’t,” he said.