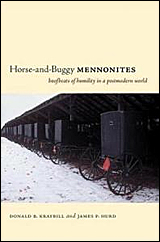 By rejecting the car and the assembly-line production that goes along with it, Old Order Mennonites have kept their way of life on their farms and in their churches for 80 years. As industrialization transformed American society from rural-farming to city-factory, these Mennonites looked to the past for guidance. The Mennonites trace their lineage back to the Anabaptist movement in southern Germany and Switzerland in the wake of the Protestant Reformation in 1517. The Wenger Church (Old Order Mennonites) was formed in 1927 in Lancaster County, Pennsylvania, when their leader and bishop, Joseph O. Wenger, led their formation after a controversy over the car with other Mennonites. Today, the U.S. is home to 18,000 Mennonites in 49 congregations in Pennsylvania, New York, Missouri, Wisconsin, Indiana, Ohio, Kentucky, Iowa and Michigan.

“How is this car-rejecting people not only able to survive but also thrive in our post-modern world?” asked James Hurd, an anthropologist who has taught at Bethel University for the past 26 years. He has co-authored the book “Horse-and-Buggy Mennonites” after a 10-year period of interviews; eight Wenger readers assisted him with reviews. “They fear,” writes Hurd, “that if they imbibe modern values they will lose the soul of their communities.”

Mennonites’ primary focus is not to do without technology as such, but to preserve their religious rituals and family life. Production is based on communal family units. Community consensus comes first, with individual choice being considered of less value. Mennonites value face-to-face contact. There is no radio, television, or cell phones; the Internet is used to only a limited extent, for business. Mennonites’ way of life has not changed much in 80 years.

“Wengers value modesty and humility in conducting their affairs,” says Hurd. “They keep their business and farms on a small scale to have time for family life. Mennonites reject the use of force or violence by boycotting military service [and exacting] no retaliation in daily social relationships…filing a lawsuit is forbidden.”

Hurd, as a young man of 19 years, trained as a pilot for missionary work, which he pursued for years in Mexico, Honduras, Costa Rica, Venezuela, and Columbia. How can those of us immersed in mainstream contemporary culture learn from these pilgrims on the margins? Hurd suggests that to “move out just a bit from our way of life to be curious about another culture will leave us humble and wise, plus [it] deepens our immersion in our own society.”