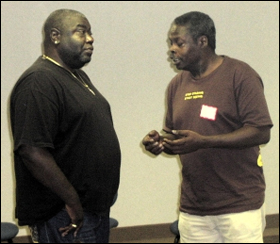 Sept. 18 was not a typical Thursday lunch hour at Edina Realty. On that day, a group of real estate agents gathered in a conference room with members of zAmya Theater Project and participated in a theater workshop aimed at finding solutions to the housing crisis.

ZAmya Theater Project will continue developing “A Little Foreclosed House on the Stolen Prairie” through October, and will perform the finished production from Nov. 16-22 at Bedlam Theatre, MICAH (Metropolitan Interfaith Council on Affordable Housing), and the Salvation Army—among other locations.

ZAmya is a nonprofit theater company that raises awareness of homelessness. Founded by Lecia Grossman and co-directed by Maren Ward of Bedlam theatre, each year zAmya creates a new play, which they tour during National Homelessness Awareness Week.

The title of this year’s production is “A Little Foreclosed House on the Stolen Prairie.” The ensemble—comprising professional theater artists, activists, and people who have been personally affected by homelessness—have been giving workshops to different groups as they develop their piece. They have given workshops at the Salvation Army, Edina Realty, and Bedlam Theatre. The purpose of the workshops is for people to learn about homeless in a fun way and to share their thoughts.

ZAmya approached Edina Realty in order to get the Realtors’ perspective and experience with the housing crisis. Donald Fonzy, a troupe member who has been homeless himself, said he was there to find out, “Who is they? Who is telling me I can’t have this, I can’t have that?”

After a brief introduction, during which the participants explained why they were there and what their housing situations were, the troupe performed a short skit that took place at the Salvation Army. In that scene, there were three characters—all dealing with financial troubles. One man had a history of bad credit and was having a hard time finding a job. Another was trying to fight the cycle of homelessness. A third man was contemplating a sub-prime loan.

Following the skit, the actors faced the audience. “What would you do?” they asked. Ward then explained that everyone was going to be divided into groups to tackle the different issues. She said that when they did the same skit and asked the same question to the audience at the Salvation Army, the audience’s answers ranged from “read the paper” to “don’t take the loan” to “get a job” to “stop smoking crack.”

One group created a skit to demonstrate how someone from a nonprofit agency could help get one of the men a grant in order to buy a home. Another group created a skit presenting an alternative for the man who has bad credit and couldn’t get a job. (They suggested that he focus on keeping with one job and applying for smaller loans as he builds better credit.) A third group made statues indicating the emotional spectrum of the loan officers. A fourth group, instead of creating a skit, made a bubble chart about the causes of the sub-prime loan crisis. The fifth group discussed the relationship between today’s foreclosure crisis and the broken treaties made with Native Americans.

Lecia Grossman says that she came up with the idea for the company when she was in a leadership development program. She does not have a theater background, but does participate occasionally as an actor in zAmya’s skits.

Maren Ward says the inspiration for the kind of work that zAmya does comes from Augusto Boal, the Cornerstone Institute for Community Theatre, and companies such as Urban Bush Women, L.A. Poverty Department, and Cardboard Citizen. Like many of these companies, zAmya strives to use theater as a tool for social change. In other words, zAmya is not just a theater company: it’s an organization working to better the lives of the poor. “We want to bring homeless and houses together,” says Ward.