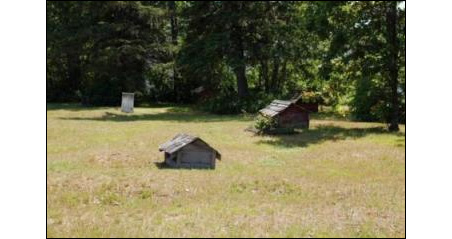 Months ago the Indian Scout started to talk about Moniwunakauning, known to some as Madeline Island. We’ll go there, he promised.

After a few false starts we went to the island north of Bayfield, Wis. — the Scout, Marilyn and me.

We went because the Indian Scout is drawn to the earliest settlements of the Ojibwe people and whoever preceded them. On a beautiful July day after a drive and a ferry ride, the Scout caught up with me as we explored an old missionary-established Ojibwe graveyard near the island marina. Several small wooden house-like structures covered the graves (see photo).

“Look around,” Scout said quietly with dramatic flair. “These are the people who gave us life. They are the reason we are here today.”

Then he walked away quickly, toward the trees and sunken unmarked graves and water.

People lived on the island after the last Ice Age, between 8,000 and 12,000 years ago. Today when you walk the sidewalks of Moniwunakauning Miniss (home of the yellow-breasted woodpecker) and admire the scenic cove, when you listen to the wind and feel the sun bake your skin, you feel the company of thousands of souls who went before. The earliest Ojibwe used birchbark canoes to travel from the mainland to the island; we enjoyed the 20-minute ferry trip across the water to the island in the Chequamegon Bay, 2.6 miles off shore.
Our people came from the East, Scout said two hours earlier as we drove north on Interstate 35 toward Duluth. We passed a large vehicle that cut long grasses along the highway, which irritated the Scout to no end. Woe befall the being who alters the Scout’s sweet grass crop.

“Can you plant sweetgrass?” I asked.

“Do you plant sweet grass?” I asked.

The Scout coughed and sneezed en route to the Wisconsin exit. From the back seat Marilyn Carpenter piped up with her story of driving around the day before to take in the sights.

Months earlier Marilyn caught wind of our tentative trip to Wisconsin, and offered to come along. Consequently, I had two Indian Scouts. You know, you can never have too many Indian Scouts along for the ride.

We zipped down Belknap Street in Superior, Wis. and headed for Highway 2 East. Marilyn noted the huge “jelly roll” bundles of hay in fields surrounded by dense woods. We passed Moccasin Mike Road, Wisconsin Point, Amnicon Falls State Park, and finally stopped at the Red Cliff Reservation to add Ron DePerry to the scouting party. Ron had lived in the area his whole life.

Once across the bay with its steely green water we headed for the museum and viewed typical displays of arrowheads, kitchen utensils, beadwork, broken pottery, weapons, tools, a stove, a birchbark canoe hanging from the ceiling, and more.

All that discovery worked up appetites, so we drove to “Grampa Tony’s” restaurant for sandwiches, followed by the visit to the cemetery established in about 1836.

The Cadotte family was well represented at the cemetery, who were among the first white settlers. Michel Cadotte married Equaysayway, “Traveling Woman,” the daughter of Chief White Crane. Equaysayway was given the baptismal name of “Madeleleine” after which the island was renamed. A 1980s headstone of a Cadotte family member is in the old cemetery among the 1800s stones and little house frames.

As we drove from the graveyard, I thought I spotted a sign that said “Non-Indian trail.” Wrong. It said “Old Indian Trail.”

After a walk through stores and a ferry ride back, we returned Ron to his place of work and headed for the language camp in the deep woods where Marvin awaited us. Meanwhile, Marilyn entertained us with stories set at Red Cliff. We didn’t find Marvin, and worked our way back to Highway 13.

The Scout and Marilyn exchanged comments on the drive home as I thought about the day. About 30 to 35 years ago my aunties and parents took us to Madeline Island. Auntie JoAnn said the Lemieux family had a family tie to Chief White Crane and his daughter, which I like to think is true.

But maybe every Ojibwe person has a family tie to Chief White Crane and his daughter, and to the lovely piece of land surrounded by the big lake.

The Scout spotted a deer as we drove. He was in a chatty mood, cheered by the trip that took us into our past. Marilyn asked what the “B” in the “B&B” market on Big Lake Road stood for.

We laughed. The SUV pointed west, back to where we most immediately came from.