MINNESOTA MAGAZINE, U OF M

Courtesy of the Geological Society of America
Mt. Rutford, a 14,688-foot peak in western Antarctica, is named after geologist Robert Rutford, who first visited the region in 1959 while a student at the University of Minnesota.

One afternoon in December 1979, geologist Robert Rutford (B.A. ’54, M.A. ’63, Ph.D. ’69 from the U of M) was taking a midday break with colleagues on a sunny peak in Antarctica when one of them spotted an unusual formation of rocks. “That pile of rocks over there looks like it was piled up as a cairn,” his colleague said. The men carefully dismantled the pile and at the bottom found a note dated December 1959 and signed by two researchers from the University of Wisconsin.

The group, which included University of Minnesota researcher J. Campbell Craddock — Rutford’s mentor at the U — had been conducting airborne research when inclement weather forced them to land. Craddock, undeterred by the conditions, proceeded to collect rock samples while the other members of his party left the note. Twenty years later, Rutford and his colleagues scribbled a message and the date on the back of the original note and returned it to its place beneath the cairn.

To Rutford, that incident typifies Antarctica’s mystery and charm — something he knows intimately. He first traveled to the continent in 1959 as a student at the University of Minnesota to conduct research for his dissertation. Later, as a geologist at the University of Nebraska and the University of Texas, he returned more than 20 times. He was the U.S. delegate to, and served as president of, the Scientific Committee on Antarctic Research, which dealt with a wide range of scientific issues and potential resource development on the continent. Last year, the United States Board of Geographic Names recognized his four decades of contributions to Antarctic research and policy by naming a 14,688-foot mountain in the Ellsworth mountain range after him (an ice stream he discovered in Antarctica also bears his name).

Recently retired from teaching at the University of Texas at Dallas, where he also served as president from 1982 to 1994, Rutford still visits Antarctica regularly as a lecturer on the cruise ships that ferry ecotourists up and down the continent’s western peninsula. In doing so, he’s gotten a firsthand perspective on the next challenge facing Antarctica: the explosive growth of visitors. In 1992, 6,500 tourists visited there; in 2007 there were 29,576. 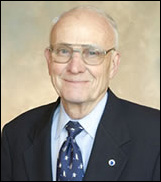 “It’s not an isolated group visiting a site that causes problems,” Rutford explains. “It’s the cumulative effect, the stress of ships landing in the same places over and over again.” But even though repeated human contact poses a threat to wildlife, Rutford has come to see the value of these visits. “Going through channels where ice is hanging over you—it’s spectacular beauty,” he explains. He’s seen that beauty inspire in tourists a respect for the continent that he believes can help safeguard its future.

Rutford hopes that those who are now in charge of overseeing Antarctica—the “young folks,” as he calls them—will institute a set of regulations that permit tourism but guard against its potentially harmful effects. Indeed, history shows that Rutford has always taken the long view of Antarctica. After stumbling upon the note from members of his mentor’s research expedition nearly 30 years ago, Rutford says, his party returned to camp and were able to tell Craddock—who at that time was working with them—exactly where the samples he had taken back to Minnesota 20 years earlier had come from. The note is still there, he thinks, buried in an unusual pile of rocks, perhaps awaiting a future Minnesota geologist to chance upon it.