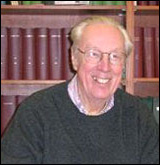 For the second time in as many months, the University of Minnesota has lost an economist who made an indelible mark on his field.

At age 84, Vernon Ruttan was still sharp, still writing a book every couple of years, and still refusing to act like the retired professor he was. But on Monday, Aug. 18, 2008, the longtime Regents Professor died suddenly, depriving the Department of Applied Economics and the University of one of its most insightful and popular faculty members.

His genius lay in bringing to light the connections between technological and social change, as well as the hidden effects of government policies and practices.

Ruttan, who also had an appointment in the Department of Economics, was a friend and colleague of fellow retired Regents Professor Leonid Hurwicz, the 2007 Nobel laureate in economics who died June 24. And, as with Hurwicz, his name often came up in discussions of future Nobel Prize winners.

A keen interest in how human intelligence could be applied to the improvement of social conditions drove Ruttan, says his colleague C. Ford Runge, an applied economics professor.

“His scholarship was impeccable, and his public commitment obvious for all to see,” Runge recalls. “He believed in classical liberalism–that is, the highest recognition of individual rights and liberties combined with the need to protect those rights and liberties by the establishment of social institutions.”

Foremost among his contributions was the “induced innovation” theory, which he constructed with Japanese economist Yujiro Hayami. It holds that when faced with scarcity of resources, people respond by circumventing the scarcity through technological innovations and social change.

For example, says Runge, “Suppose water is scarce. Farmers have learned to utilize irrigation systems. The organization of [large] irrigation schemes requires a set of social rules for sharing of water. Thus, technology and social change both happen in response.”

Another phenomenon explained by Ruttan and Hayami’s theory concerns the way agriculture developed in different countries such as the United States and Japan, says applied economics professor Benjamin Senauer. In the United States, land was plentiful but labor was not. Therefore, to get around the labor shortage, “we made all sorts of advances in agricultural technology.”

But Japan, lacking land, emphasized getting more out of small plots. “There, the focus was on developing more productive varieties,” Senauer explains. “Much farming is by machines on the scale of rototillers. The emphasis is on more production, using technologies such as ‘night soil.’

“This pattern is seen in all contexts and all industries. Every book in the field of development during the last 20 years has had a section on induced innovation. It occurs naturally in a market economy.”

Another area where Ruttan made an impact was foreign aid. Several decades ago, says Senauer, it wasn’t obvious that the object of food aid should be to help the recipient country increase its production or access to food. Instead, it was tempting to “dump” U.S. farm surpluses in other countries. But this depressed prices and discouraged farmers abroad.

“There’s been a slow change, thanks to people like Vern Ruttan, to shift foreign assistance in food from a focus on benefits to the United States [from “dumping” surpluses] to a focus on the benefits it provides to recipients.”

The economic roles of government fascinated Ruttan. For example, a recent book documented the role of the military in driving “big science” and “big technology” projects, and pointed out how such support has been weakening.

He also studied the value of agricultural research, much of which is government funded. “He found the payoff in improving corn and wheat varieties was incredibly high,” says Senauer.

As a colleague, Ruttan was always there to lend a hand.

“He would make a luncheon appointment with junior faculty just to visit and see how things were going,” recalls Senauer. “He showed incredible generosity in helping them along. He did the same thing with graduate students, whereas a lot of big names try to protect their time.”

In retirement, Ruttan kept up a torrid pace, says Senauer:

Somehow, Ruttan also found the time to canoe virtually every lake in the Boundary Waters Canoe Area Wilderness of northern Minnesota. Many times, he paddled alone. He also maintained a fierce loyalty to Gopher men’s hockey.

Vernon Ruttan’s honors include election to the National Academy of Sciences (1990), the U.S. Department of Agriculture Distinguished Service Award (1986), and the Alexander von Humboldt Award for Agriculture (1984), given for the most significant contribution to U.S. agriculture during the previous five years. He was also a fellow of the American Academy of Arts and Sciences and the American Association for the Advancement of Science. He was named a Regents Professor in 1986.