The “father of waters” has a new offspring at the University of Minnesota’s St. Anthony Falls Laboratory (SAFL), and the public is invited to see it.

Researchers have diverted Mississippi River water to create a meandering stream on a grassy riverbank next to SAFL opposite downtown Minneapolis. The baby brook in the new Outdoor StreamLab is open to both the elements and experimental control, making it an ideal facility for studying such topics as the ecological roles of streams, flood control, and stream restoration.

A project of SAFL and the National Center for Earth-surface Dynamics, the Outdoor StreamLab is only a few months old but is already attracting two important demographic groups: top-notch researchers and populations of algae, insects, and other life. Among its denizens are a pair of mallards that seem to have adopted the stream as a vacation home and can often go paddling up the channel, oblivious to people.

The ducks add a touch of levity, but the need to understand streams is serious. Factors such as floods, drainage patterns altered by development, and heavy loads of chemicals and sediment are changing the world’s waterways; dealing with all this has to be done right, and that requires research on realistic riverine systems.

That need is illustrated by what happened at Uvas Creek, Calif., says Anne Lightbody, a research associate at SAFL and manager of the Outdoor StreamLab. 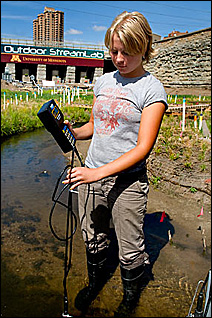 Photo by Patrick O’Leary
The water in the Outdoor StreamLab is easy to get into and study, as Katie Kramarczuk, seen here with a flow meter, shows.

“They tried to turn it from a braided stream [with an intricate pattern of channels coursing through sand] to a [simpler] meandering one,” she explains. “The next spring, it flooded and reverted. People didn’t take ‘what the river wanted to do’ into account.”

Trout streams are another example of how understanding ecological relationships is vital to preserving things we value.

“Trout streams must be cold,” says Lightbody. If trees along the banks are cut, there goes the shade, and the water starts to warm up. Also, changing patterns of land use may reduce the amount of groundwater entering a stream. Groundwater, with its typically cold and steady flow, not only cools streams directly but helps keeps their water levels from dropping. This minimizes shallow spots, which are prone to warming by the sun.

One of the projects under way at the lab is an investigation of how loads of sediment affect invertebrates, fish, and the physical stream structure. Another examines how vegetation affects the flow of streams and the retention of flood water.

“We need to understand what the flood plains are doing and what ecosystem services they provide,” says Lightbody. For example, if flood plains retain water long enough, they may absorb dissolved pollutants and sediments before the water seeps back into the river channel.

But the ability to keep streams healthy rests on more than science; human acceptance is also crucial. Lightbody is part of an upcoming study to look at the tradeoffs between public acceptance of ecosystems like wetlands and the services, such as cleansing waters of nutrients, that ecosystems perform.

Even a very small change in a project can increase acceptance, says Lightbody. For example, a wetland may be seen as unsightly–until it acquires a mowed path around it and benches for birdwatching.

But mowing has its downside.

“With streams and lakes, people want to mow right down to the water,” Lightbody says. “How do you convince people that a buffer is OK? Can we put in paths or something to make it acceptable?”

Attitudes do change, though. Today, Lightbody says, storm water retention ponds go into every new development and are required by every zoning regulation she knows about. But it was not always so.

“Twenty years ago, the people bringing this issue up and who wanted developments changed to accommodate storm water management were considered mavericks,” she explains. “Now it’s standard.

“Understanding how rivers work can help us make smart decisions about how and where and whether to develop.”

Plans call for adding a second, longer stream to the lab.

Watch a video of the Outdoor StreamLab here.