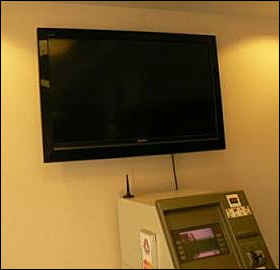 Courtesy of TC Daily Planet
Video camera monitors at police headquarters were not working on Oct. 29.

The official story is that anyone can walk into St. Paul police headquarters and view the footage from the 100-plus cameras monitoring downtown and the Central Corridor for crime. The official story also says that the cameras are monitored by police in the Western District station (on Hamline Avenue) and in the central St. Paul police headquarters. Actually, on a recent day, no one seemed to be watching and the public monitor did not work at all.

The installation of the street cameras along the Central Corridor, the stretch along University Avenue between Minneapolis and Saint Paul, was a project developed between the Saint Paul police department, The Minnesota Department of Transportation (MnDot), and Metro Transit. When the Republican National Convention (RNC) came to Saint Paul, the street camera project was expanded to include the downtown area.

Joe Neuberger was the senior commander for the St. Paul Police Department’s homeland security and special projects unit leading up to the convention. Now the chief executive officer for Police Chief John Harrington, he says that the street cameras were part of a long range plan that was developed before the announcement of the RNC. When it installed the cameras, St. Paul joined a host of cities from Boston to Las Vegas to Chicago.

I went to Police Headquarters October 29 and asked at the front desk if I could see the “viewing station.” The receptionist did not know what I was talking about.

I said, “You know, where they show footage from the street cameras along the central corridor and in downtown Saint Paul… I was told there was a viewing station here.”

“Who told you that?” the receptionist asked.

So I waited, and Joe Neuberger came down, and pointed to a 52 inch TV screen above me.

The screen was not on. “My first guess is that someone turned it off,” Joe said, approaching the monitor and trying to switch it on. When that didn’t work, he took me to the control room, which was full of monitors, also all turned off. He made a call and asked if someone could talk him through trying to get the system turned on, but there was no one available to help. He suggested I make an appointment for another time. “We’re still working out the kinks,” he said.

Neuberger said that video footage is being processed at the Western District station and the main police headquarters, where there is also a public viewing station. There is also a map at headquarters, showing where the cameras are located. Neuberger says that while the cameras are currently unmarked, they will eventually be marked with a camera label and the SPPD logo.

Neuberger says that during the convention there were as many as two officers watching the tapes full time at police headquarters or the Western District station, but the video was fed to as many as 40 people at different stations around the city, who monitored for traffic congestion, civil disturbance, etc.

Police are currently reviewing 6,000 hours of RNC footage, says Neuberger. Although so far no arrests have been made based on evidence from the cameras, he says that it is likely that some of the footage will be used to prosecute those who were arrested on the streets during the convention.

Chuck Samuelson, of the American Civil Liberties Union (ACLU), is not happy with the street camera installation. “They don’t prevent crime and probably never will,” he says. Samuelson says that while a crime is less likely to occur when a police officer is present, a camera does not have the same deterrent effect.

Samuelson is also wary of the cameras’ ability to solve crimes. He says that often crimes happen in evening hours, and the poorly lit footage is frequently unusable.

Further, Samuelson says, the street cameras cause citizens to “lose the American sense of not being spied upon,” and they take away a sense of autonomy.

Finally, Samuelson feels that there is a potentially dangerous aspect of the street camera footage, that of the J. Edgar Hoover problem. Hoover, the first director of the FBI, kept files on every candidate and politician during his tenure. Samuelson sees a danger of collecting damaging footage of political figures that could be used as blackmail.

The cost of the cameras: The Central Corridor cameras (approximately 35) cost $1.3 million. The additional 75-80 cameras installed for the RNC cost an extra $2 million. Neuberger estimates that the cost to maintain the street cameras is $100,000 per year.