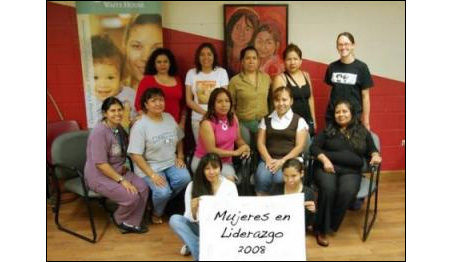 On Saturday, 10 women graduated from Waite House’s Mujeres en Liderazgo (Women in Leadership) program in a ceremony that took place at Pillsbury House in the Phillips neighborhood of Minneapolis. The women, who come mostly from South Minneapolis but also from throughout the Metro area, celebrated finishing the program, which was divided into 13 workshops and two months of community activities.

Waite House, which is one of the settlement houses of Pillsbury United Communities, has been offering human services and community building activities in Phillips since 1969. Waite House introduced Mujeres en Liderazgo, a women’s leadership program conducted entirely in Spanish, this year. The program uses an empowerment model to focus on leadership, gender, family dynamics, finances, immigration, and other issues.

Margarita Carillo was one of the women who attended the program on Saturdays throughout the summer from 10 am to 2:30 pm. She says the program focused on a number of things, including political and community issues, but she found especially useful the information about schooling that she received in the program. “”Latinos don’t have information to get better education for their kids,” she says. She says the program helped her to make the decision to transfer her third grade daughter from Bancroft Elementary to Ramsey Fine Arts, where her younger son also started this year.

As for her own career, Carillo says she is happy with her job at the Target Center, but perhaps in the near future she will be able to work with a nonprofit Latino organization. One of the useful aspects of the program, Carillo found, was that the participants got to work with different organizations, which opened her eyes to the different possibilities that were out there.

Another woman in the program, Jovita Morales, found out about the program because she was working as a receptionist at Waite House. She says a really valuable tool she learned in the program was what they called a “V”, where progress is made in the same way as a pyramid- first with the base, and then building up from there. Morales says she learned valuable skills about communication in the program. She really appreciated the training in how to facilitate a group. She hopes to use her leadership skills to help women trying to escape domestic abuse. Morales is a woman who has overcome a lot, including an abusive relationship herself 13 years ago, and more recently, the tragic experience of her child being injured in the 35 W bridge collapse. “Every day I’ve grown up,” says Morales.

A unique aspect of Mujeres en Liderazgo program is that the participants choose a particular issue that they want to focus on. The women chose to focus on drivers licenses for immigrants. The women gained leadership skills by organizing an educational campaign, gaining over 1,000 signatures, speaking with churches, community organizations and community members, and contacting elected officials such as Keith Ellison and Karen Clark.

In January, a new group of women will begin the next program of Mujeres en Liderazgo at Waite House. For more information or to learn how you can support the program, please contact Alicia Ranney, (612) 578-8266.