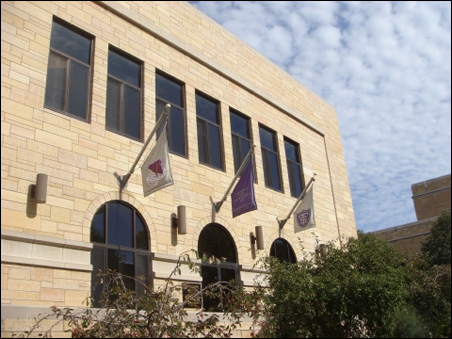 In recent weeks, the University of St. Thomas has announced that it will both close its 80-year-old Department of Theater and tear down the Foley Theater, an on-campus venue that hosted its first production in 1915. The administration is calling this a strategic decision to free resources for other programs with greater student interest, but students and faculty in the department are criticizing what they see as the university’s abandonment of an essential art.

Since 1971, St. Thomas’s theater program has been a joint department shared with the College of St. Catherine. In July, St. Thomas sent letters to its students with declared majors or minors in theater, notifying the students that while the joint department would be dissolved, the students would be allowed to complete their degree programs. The rest of the university community learned of the decision through a September 15 article in the Bulletin, the university’s official news source. The Bulletin article describes a lengthy review process that wound its way through three different academic committees before a final decision was made by Marisa Kelly, dean of St. Thomas’s College of Arts and Sciences, and Alan Silva, dean of arts and sciences at St. Catherine.

“We just didn’t feel that there was the critical mass of student interest to be able to maintain the quality of the program going forward,” says Kelly. “We thought that [by making this decision] we could enhance our other programs, and create opportunities for students to be involved in theater in other ways.” Kelly emphasizes that while the formal department is being dissolved, St. Thomas hopes to continue its longstanding partnership with St. Catherine. “Students here would be able to participate in production opportunities at St. Kate’s, and their students would be able to participate in our music programs.” Kelly notes, however, that the exact details of any future partnership cannot be known until St. Catherine, which has recently announced its decision to move from college to university status, works out the particulars of its new organizational structure.

Kelly says that the decision to tear down the Foley Theater, which opened as a gymnasium/auditorium in 1914 and was converted to a dedicated theater space in 1958, was unrelated to the decision to eliminate the theater department. “The Foley Theater is very old,” she says. “It is not handicapped-accessible, and making it accessible would be hugely expensive. We’ve been planning for a few years to put on that footprint what will potentially be part of a new student center and athletic facility; we’d been planning to move all the theatrical productions over to St. Kate’s, which has a black-box theater and the O’Shaughnessy.”

A timeline of theater at St. Thomas

· 1885: The Lyceum is founded as a literary club that also produces dramatic performances.

· 1915: A new auditorium built as an extension to the St. Thomas Armory hosts its first theatrical production, My Friend From India.

· 1928: The Speech and Theater Department is officially inaugurated.

· 1929: Channing Pollock’s The Fool is the first St. Thomas production in which female students from St. Catherine are allowed to appear.

· 1932: Robert Breen, a young student, appears in the title role of Hamlet. Breen left St. Thomas the following year; he would ultimately go on to found his own company and later head the American National Theatre and Academy.

· 1958: The Armory auditorium, converted into a dedicated theater and rechristened the Foley Theater, opens with a production of Aristophanes’s The Birds.

· 1971: The theater departments of St. Thomas and St. Catherine combine.

· 2008: St. Thomas announces that the joint department will be dissolved, with no plans for a freestanding department at St. Thomas. The Foley Theater is slated for destruction.

Students involved in theater are dismayed at their program’s impending dissolution. “I think that it was a poor decision,” says Molly O’Gara, a junior majoring in theater and English. “If you’re going to offer a liberal arts education, you need to offer the arts. [St. Thomas is] ignoring a major part of the human experience.”

O’Gara and two other students recently met with Kelly to talk about the transition. While Kelly describes students as being “reasonably happy” with the university’s future plans for offering students performance opportunities, O’Gara says she was “a little disheartened by the fact that there wasn’t an apology offered. There were reasons given, but [Kelly] said that we shouldn’t be upset because we’ll still be able to complete our major. The administration doesn’t understand the emotional impact this has had on the department and its students.”

“I’m disappointed myself,” says Kelly, “in that we want to be able to offer the broadest range of programs that we can. But the reality is that you have to make strategic decisions and you have to look at student interest.” There are currently 11 St. Thomas undergraduates who have declared majors in theater; Kelly describes this as a relatively high number in the context of recent years. “While it’s been a quality program, that was going to be much more difficult to do. I think that when we work through all this transition, the experience for students will be, if not equivalent, perhaps enhanced in some ways.” Kelly says there is significant faculty interest in establishing an independent program in film production, which to date has been taught in the theater department.

Kritzer says that the administration did allow her the opportunity to make her case for retaining the department. “My primary argument has to do with theater in a liberal arts institution,” she says. “Theater contributes in a vital way to the liberal arts. It gives students opportunities for personal development. For those students and for those who come to see the shows, it’s a unique opportunity for experiencing the lives of other people. Without those opportunities, education will suffer.”

The remaining theater majors have resolved to work to raise awareness of theater on campus. “We’ve got the impression that we can’t really do anything to reverse the decision” to eliminate the theater department, says O’Gara, “so we’re trying to step forward through the Theater Club. We’re getting a lot of publicity out about the department and the club and the things we can do. We’re still creative people, who St. Thomas can’t just get rid of.”