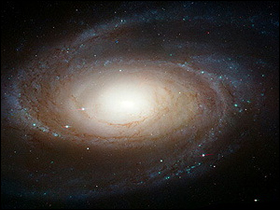 NASA, ESA, Hubble Heritage Team (STScI/AURA)
The galaxy known as M81 rivals the Milky Way in size and lies 12 million light-years away. Two University of Minnesota researchers were on a team that surveyed the stars of M81 and 68 other nearby galaxies with the Hubble Space Telescope.

The stars in Hollywood may conceal their ages from snoops, but the ones in the sky can’t escape the cosmic paparazzi. Even if they keep their distance—up to 13 million light-years of it—they have nowhere to hide from astrophysicists like the University of Minnesota’s Evan Skillman.

Skillman, a professor of astronomy, and graduate student Dan Weisz are part of a team that surveyed about 14 million stars in 69 nearby galaxies with NASA’s Hubble Space Telescope. Measuring the ages of stars in those galaxies opens the door to discovering whether our Milky Way’s evolution is ordinary or exceptional.

If ordinary, we can use it as a model of galaxies throughout the Universe and dream that plenty of them harbor Earth-like planets and intelligent life. But either way, the data will help astrophysicists trace the evolution of galaxies into the astonishing variety of forms we see today.

For example, galaxies like the Milky Way and its nearest large neighbor, Andromeda, have a large bright disc of stars. Other galaxies pack their stars into a football shape. “Dwarf” galaxies are very small, and many of them end up being torn to shreds by the tidal forces of larger ones, including the Milky Way. “The main question is, how are galaxies formed and how do they evolve?” says Skillman. “This survey will be useful for the next decade or more.”

If you look at a galaxy through a backyard telescope, you’ll see a blur of light from billions of stars. But the Hubble can pick out single stars because it orbits high enough to be free of the distorting effects of Earth’s atmosphere.

Known by the acronym ANGST (ACS Nearby Galaxy Survey Treasury), the Hubble survey included Skillman and Weisz because of their demonstrated skills in writing computer programs to analyze data from dwarf galaxies in the Milky Way’s neighborhood.

“We got data from 130 orbits of the Hubble between September 2006 and January 2007,” says Skillman of the ANGST survey. “With all the data coming in, it was like Christmas every week.”

Seeing the future
A galaxy’s fate is determined largely by its pattern of star formation over time, says Skillman, who has spent 10 years using Hubble data to study the process. An extensive data set like ANGST will help astrophysicists predict the evolution of galaxies so distant that we see them as they were several billion years ago. Images of such galaxies give no clue how they have evolved since then; some might even have turned into twins of the Milky Way, complete with intelligent life.

The key to predicting a distant galaxy’s future begins with measuring the color and brightness of thousands of stars in nearby galaxies. From that data, astrophysicists can calculate the stars’ ages and reconstruct the “fossil history” of the closer galaxy as it evolved through star formation.

They will compare, for example, the “fossil portrait” of that galaxy as it was eight billion years ago to an actual galaxy eight billion light-years away. A striking resemblance would imply that the two galaxies have evolved in the same way over the last eight billion years. A key trait is the amounts of metals like iron and nickel; if high, it implies that solid, Earth-like planets may have formed in the distant galaxy.

Galaxies that have produced lots of heavier elements such as metals are said to be chemically enriched. The Milky Way is one, but is it a rare bird or typical enough to continue as a model of how galaxies evolve?

“One thing we know about the Milky Way is its history of getting chemically enriched,” says Skillman. “But that part [of a galaxy’s character] isn’t well known for other galaxies. If the star formation history for our galaxy is unique, then our inferences about the chemical evolution of other galaxies would be off.”