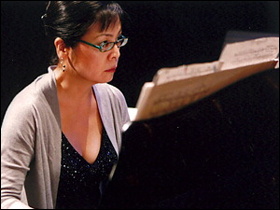 He’s a self-taught composer from Glasgow, Scotland. She’s a classically trained pianist from Tokyo. On Oct. 29, James Dillon and Noriko Kawai will grace the stage at Ted Mann Concert Hall on the University of Minnesota’s Twin Cities campus for the North American premiere of Dillon’s The Book of Elements, a five-volume piano solo.

The concert is icing on the cake for the University, which pursued the musical colleagues—each superstars in their respective crafts—and landed them just before the fall 2007 semester began. Dillon joined the School of Music as a professor of composition; Kawai came aboard as a visiting associate professor of collaborative piano.

“I thought it would be an adventure I couldn’t pass up,” says Dillon. Ditto for Kawai.

The couple met in London through mutual friends more than 12 years ago. A freelance composer since the 1980s, Dillon has also taught composition on a short-term basis at Goldsmiths, a college of the University of London, and the University of Central England in Birmingham, in addition to guest lecturing and leading master classes at numerous music schools around the world. Kawai, who started piano lessons at the age of three, has given recitals across the globe and performed at the top music festivals. She was a professor of piano at her alma mater, the Royal College of Music in London.

“[When I heard that the School of Music was] in the process of hiring James, the University of Minnesota immediately shot to the top of my list of graduate programs,” says Michael Duffy, who’s pursuing a master’s degree in composition. “He is a towering figure in our field…. [As a teacher, he] demands clarity of thought and asks the right questions that provoke you to carefully consider what you’ve done so far and where you’re headed. There is prodding and suggestion, but never any push to imitate.”

Creating a masterpiece
Dillon’s Book of Elements was the product of chance. The composer had not written anything for solo piano for about 15 years, “and it was really coincidental that within 12 months, I had requests from five pianists,” he says.

“The first of the requests was from a pianist whose work I admired a lot, Australian Roger Woodward,” adds Dillon, “then came the requests from some younger pianists who were also looking for new works. I decided to look at the idea of doing a set of books—loosely connected with the [traditional Chinese] notion of elements, [wood, fire, earth, metal, and water]—that each of these pianists could premiere.”

The Book of Elements: Mark your calendars

All events are free. For directions, visit the School of Music.

Kawai performed The Book of Elements, which has been described by BBC Music Magazine as “rich” and “utterly riveting,” at the UK Huddersfield Contemporary Music Festival, the Royal College of Music in London, and the Alicante Summer Festival in Spain. In 2003, she recorded a CD of Elements.

“To play all volumes in one go is a quite a tour de force,” says Kawai, who premiered volume 2 in Germany. “It’s about 90 minutes without any intermission.

But daunting as it is, Kawai savors the challenge; once she starts, she says, time ceases to exist and the music takes over.

“A pianist like Noriko Kawai, one part of her life is almost to be like an athlete,” says Dillon. “She has to keep everything in such great shape for playing. And the other side of her, of course, is this musical absorption of the material and reinterpretation of it. Performing is a highly specialized field. Perhaps it was possible in the time of Mozart or Beethoven to be a composer and a pianist. Today it’s virtually impossible because the complexity of the material and the virtuosity of the playing techniques have just changed so much.

“I gave up all dreams of being a performer in my early 20s, when I realized you have to spend eight hours a day practicing,” he adds.

Kawai is equally generous in her praise of Dillon. “What I like about Dillon’s piano music is, despite his vast knowledge of the keyboard literature, his language remains unique, outrageous, elegant, exasperating, funny, and helplessly beautiful,” she says.

When asked what he wanted people to leave with after attending the October 29 concert, Dillon, who started composing at about the age of seven or eight, replied:

“The only thing one can hope for is that an audience has an open and curious mind, nothing else. And actually, what they’d leave with, I don’t want to have any control over whatsoever. The concert contains all the things that one demands of a concert, which is essentially a kind of musical magic.”