Who could have guessed that one of the best ways to find what lies underground is to go beyond the stratosphere?

Since 1990, University of Minnesota professor Fred Cooper has been using a geographic information system (GIS) and Landsat digital satellite images to survey architecture in an area of the western Peloponnese, the peninsula that forms the southern half of mainland Greece.

GIS is a sophisticated way of combining layers of data about a place and using that data to answer questions; Landsat images, taken for over three decades, help track changes on the Earth surface.

The Peloponnese, occupied by the Crusaders from about 1205 to the 1440s, was known in the Middle Ages as the Morea and is rich with churches, large fortifications, and domestic architecture. Although some parts of these relatively recent ruins have remained visible, many were found by accident as archaeologists searched for ancient buildings through the 1980s. 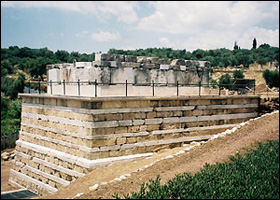 Courtesy of UMN News
U professor Frank Cooper co-directed the excavation of the ruins of this Greco-Roman heroon, or hero shrine, in Ancient Messene, Greece, in 1992 and then its reconstruction in 2005.

The Landsat satellites, according to graduate student Sara Franck, can “see” reflected sunlight and detect building-shaped changes in the topography of an area that are invisible to the naked eye. When these images are combined with GIS technologies, Cooper, who specializes in Greek and Roman art and Greek architecture, and his team can accurately map out the sites of their explorations.

With former graduate student Todd Brenningmeyer, Cooper developed a GIS database system that aids in matching fresco fragments. This technology was applied to a “real world” situation when the Minneapolis police department asked Cooper to help with a murder case that required the reconstruction of a shattered pane of glass. Several students, including Franck, reconstructed the glass using the GIS program to match the shards of glass based on characteristics such as break type and glass coat.

Old versus new?
Archaeology hasn’t completely gone over to satellites and GIS; there is still plenty of work to be done using good old-fashioned digging and hoisting. Take, for instance, the site of an ancient heroon (commemorative building for a hero) located in Ancient Messene, Greece. The building had been knocked down in antiquity and lay covered by two millennia of dirt and vegetation. To unearth the heroon, Cooper, undergraduate student Andrew Boos, and Franck—who eventually supervised the block removal—had to identify the stones by type and orientation, pull them out of the ground with straps, and move them into a block field where they could be assessed before reconstruction.

Next, Cooper and his project assistant director, Pieter Broucke, created a plan for reconstructing the heroon. Once they identified badly damaged blocks and determined how many were missing, they had new stones quarried locally using a plan drawing by Franck. Reconstruction began in 2005.

This experience sparked a question in Franck: They were using modern quarries to replace the ancient stone, but where were the ancient quarries located?

GIS to the rescue. Using a satellite image, signatures for known quarries were used to generate an output, via GIS, indicating areas where similar stone might be located Franck then collected additional information at the sites and explored these areas to verify quarry locations.

“The combination of art history, archaeology, and technology is important and exciting for us and really expands future development within the field,” she says. “And personally, I’ve developed my analytical skills in architectural style and archaeological finds in ways that never could have happened through just classroom study.”