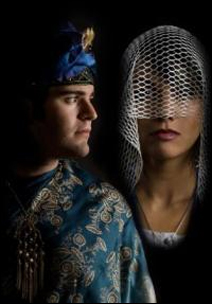 Jason Grote’s “1001” is an ambitious piece of theater. With some sticky metaphysical glue he attempts to connect a modern-day biracial love story with that of the ancient Arabian legend of One Thousand and One Nights. Grote does this by creating a narrative that doesn’t so much challenge the linearity of storytelling as redefines it.

Where a simple story starts and finishes and contains only itself, Grote’s story has no beginning and no end, and seeks to encompass every human experience under the sun. After all, “what are any of us but a collection of stories?” Though Grote’s overall philosophy as it relates to the two particular dramas on stage is never really successfully explained, for the most part he succeeds in linking them across time and space.

The Mixed Blood Theatre’s interpretation of Grote’s work, under the direction of Sarah Rasmussen, is no less ambitious. The play features a multitalented group of actors, beautiful lighting by Karin Olson (utilizing some clever use of shadows), and a gorgeous scenic design by Kate Sutton-Johnson and Zach Weiler. The supporting cast in particular really shines in their roles, from Randy Reyes’s impeccable comic timing as the one-eyed Arab to Brian Sostek’s austere Wazir. While Fawzia Mirza’s sober lack of inflection in her lines at first made her lead roles as Dahna and Scheherazade fall flat, I gradually learned to appreciate the understated verbal nuances of her speech. Sid Solomon is well-suited to the lead role of modern-day Alan, but at times his ancient king equivalent, Shahriyar, felt a little forced. More often than not this was due to Grote’s script, which relies heavily on anachronistic malapropisms that are meant to draw parallels between the two time periods but generally come across as clumsy. Andre Samples and Emily Gunyou Halaas played a host of supporting characters, and both evinced the dexterity required for so many role changes.

The real beauty of the play was in the visual depiction of the time periods, constantly shifting from modern-day Brooklyn to the Gaza Strip to ancient Arabia. Rasmussen’s production relies on simple adjustments that connect the stories without the clunkiness of scene changes: an ancient Persian tome becomes a laptop, a sheet of blue silk becomes the pulsing backdrop of a dance club. I may be mistaken, but the theater even seemed to smell of sandalwood at times. The subtle effects place the audience squarely in the middle of the fable, and when it jumps across space and time we do not get left behind — it makes for a wild ride through history.

Jon Behm is a Minneapolis-based photographer and writer. While his specialty is music, Jon has a wide variety of interests that tend to take him all over the Twin Cities on a daily basis.

“1001,” a play written by Jason Grote and directed by Sarah Rasmussen. Presented through November 23 at the Mixed Blood Theatre, 1501 S. 4th St., Minneapolis. For tickets ($11-$30) and information, see mixedblood.com.