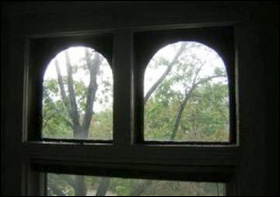 Photo by Connie Nompelis
September 20, 2008: Where yesterday morning were the famous Healy arched windows, by the afternoon were simply vacant holes, staring mournfully toward the freeway.

When David Piehl arrived at home at about noon on Sept. 19, he checked the nearby Regan house to make sure it looked OK. He went inside his own home, and when he came back out about 2:30 p.m., he saw that the stained glass was gone from his neighbor’s house.

“My heart just sank,” he recalls.

The neighbors of the Healy district were devastated about the Regan house, but not surprised. They knew that it was a dangerous time for the house, as it had just been recently foreclosed on and was not boarded. The neighbors had taken turns watching over the house.

“We were petrified it would happen,” says Connie Nompelis, who lives two doors down from the burglarized home. A real estate agent herself, Nompelis explains that right after a foreclosure is the most vulnerable time for a house. “One neighbor actually sat in his car overnight,” Nompelis recalls. Brian Finstad sat in his car in the alley and watched over the house. David Piehl watched the Regan house from his own house all night long on the day it was boarded.

The story of the William M. Regan house illustrates the strip and steal process. The Regan house, named after its first owner, is located in the Healy Block Historic District, located in Central neighborhood in Minneapolis, near Phillips. The block includes a collection of Queen Anne-style homes constructed by Theron Potter Healy. Rich with stained glass, curved windows, and decorative balustrades, these homes were at one point prime real estate for the upper middle class of the Twin Cities.

Vacant & Open to Trespass — A vacant building that is not secure is a danger to the neighborhood because it invites squatters, can be a fire hazard, and is a danger to children. Boards help prevent these hazards.

Owner choice — Owner is not choosing to occupy the building at the moment, and chooses to use boards to keep it secure.

Police — Police board-ups are generally done when there has been a raid on a property and the building is now vacant, or if the police have observed unsafe activities in a vacant building. This keeps the building secure.

On boarded buildings: City ordinance allows any building to be boarded for 60 days without penalty. After 60 days, if the owner has not removed the boards or taken out a permit to rehab the building, the building may be placed on the Chapter 249 list.

On reporting vacant buildings: If you see a boarded building that is open to trespass or would like to find out the status of a particular building, call (612) 673-2498.

The thieves took stained glass, woodwork, and some copper from the building. The theft of copper pipes can cause explosions. Jackie Erickson, the Realtor for the house, says she had to shut off the gas because the thin strip of copper connected to the furnace was stolen, and its absence could make the house explode.

With the increase in foreclosures across the country and here in the Twin Cities, the vacant houses pose problems for neighbors and for the cities where they are located. Securing vacant homes is a process that is riddled with bureaucracy that is sometimes counterproductive, and can jeopardize the safety of the building and the neighborhood.

Jacque Erickson is the real estate manager hired by Premiere Asset Services, an asset management company that assists homebuyers in purchasing foreclosed homes. In listing the house, Erickson tries to keep the fees for new buyers to a minimum, which means avoiding condemnation and protecting the house from damage.

Foreclosure laws set a redemption period of six months to buy back the house after the bank forecloses. In the case of the Regan House, the previous owner completely abandoned the property, so Erickson was able to get the redemption period reduced to six weeks.

But even leaving a house vacant for six weeks is a liability. Boarding a house can protect it, but the boards also can serve as an advertisement for squatters and thieves. Additionally, once a building is recognized by the city as a building that should be boarded, its address gets listed on the city’s website which further advertises its vacancy.

If someone buys the property, they may be able to negotiate the vacant building registration fee with the city. According to Tom Deegan, manager for the Problem Properties Unit in Minneapolis, the new homeowner could enter into a restoration agreement with the city. The agreement would detail plans and a schedule for bringing the building up to code and posting a bond to ensure that the agreement will be carried out. In return, the city would agree that, if the home is back up to code in six months, it would forgive part or all of the fee.

Deegan explains that the city won’t always board a house just because it is vacant. There have to be other factors that support the boarding, such as frequent 311 or 911 calls around the area. A house that is foreclosed and walked away from is more likely to get put on the list of houses to be boarded. Once a call is made about a suspect house, a photograph is taken of the house, listing its address and code violations such as an open window or door. The owner is sent a letter with a picture of the opening and must secure the building within six days. If they do not, a boarding contractor is hired to secure the property within 72 hours.

Deegan notes that ten days might pass between the notification to the owner that his/her building is unsecure and when it is boarded by the city, and ten days is a long time for a house to be open without protection.

In cases where the building is at a high risk for theft, the inspector might order an emergency board-up, which costs $135 dollars per opening instead of $45 per opening. (Depending on the number of doors and windows, total costs for boarding a house will run into the thousands of dollars.) Deegan explains that the city only uses emergency board-ups in very dangerous circumstances, because “we are cognizant of the fact that this is taxpayer’s money.”

David Piehl, who lives in a Healy historic home that had previously been foreclosed, is very unhappy with the lack of protections that the homes receive. He believes that police need to provide more protection for neighborhoods that have a lot of foreclosed homes.

“The mayor doesn’t believe there’s crime in this country,” Piehl says, “so neighbors have to look after themselves.” Piehl was one of a group of neighbors to lobby the city to install very tall fences around vacant houses. They got the support of City Council member Elizabeth Glidden, but couldn’t get the funding. They also unsuccessfully lobbied to have valuable structures such as stained glass, fireplaces and woodwork put into storage until a vacant house becomes occupied again. Removing and then replacing these items is a very expensive plan, though, and would not protect the copper in the house.

David Piehl and his neighbor Connie Nompelis agree that they are in favor of preserving old homes instead of demolishing them, which ignores the beauty of historical architecture and the green aspect of keeping the building.