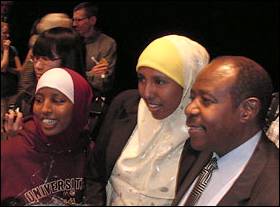 Courtesy of UMN News
Paul Rusesabagina with some of the students in the First Year Seminars.

Can one person make a difference?

Paul Rusesabagina, who inspired the Academy Award-nominated film Hotel Rwanda, has answered that question powerfully through the example of his life. Rusesabagina, a hotelier, sheltered more than 1,200 neighbors and strangers during the 1994 Rwandan genocide, and fended off their would-be killers with a combination of diplomacy and deception.

The same question serves as a common point of inquiry for the 400-or-so freshmen participating in the new College of Education and Human Development First Year Experience. They all had read Rusesabagina’s autobiography, “An Ordinary Man,” and discussed it during their interdisciplinary First Year Inquiry courses. In November, they had the rare opportunity to meet the author and pose questions directly to him.

Kris Cory, who teaches literature in a first-year seminar with co-instructors in immigration and law, says she was impressed by the students’ questions, which covered a broad range of topics, including the role of God in such a tragedy, response to critiques of the author’s take on the Rwandan government, and the differences between the United Nations’ response in Somalia (where a number of the first-year students hail from) and in Rwanda.

Rusesabagina described his interaction with the students as fantastic, calling them aware and informed. “It was if they had the book in their head, memorized,” he said during a brief interview.

“I love young people,” he said. “I believe in them because they are still passionate. They are the people to talk to; that is my audience.”

At a reception later in the day, assistant professor Rashné Jehangir recounted how the students referred to Rusesabagina by his first name and explained that they felt as if they knew him after weeks of studying his writing and his life. They feel as if he’s “our Paul,” she said.

After the official class time and Q&A session were over, all of the first-year students joined Rusesabagina on stage for a photo — a moment that Cory and other faculty called one of the most powerful of the day. He lingered for a half hour afterwards to speak with students one-on-one.

“It was so nice and fun to see them interact with him,” said Cory. “He was so warm and able to respond to really any question they asked.”

At a reception later in the day, assistant professor Rashné Jehangir recounted how the students referred to Rusesabagina by his first name and explained that they felt as if they knew him after weeks of studying his writing and his life. They feel as if he’s “our Paul,” she said.

One of the students, Mohamed Hassan, asked Rusesabagina if he still speaks Swahili, and was surprised by how fluent the author still is in the language. Hassan, who is of Somali decent and came to the United States, said Rusesabagina inspired him to hold on to his native Swahili.

Hassan said he felt a personal connection to Rusesabagina’s autobiography, which reminded him of his father’s stories. “When Paul talked about his cool neighbors turning to killers and how families were separated, it vividly reminded me of stories that my father told me about the civil war in Somalia; how brothers became enemies, best friends were torn apart, and how his lovely neighborhood was buried,” said Hassan.

Ultimately Hassan said Rusesabagina’s story has convinced him that one person can indeed make a difference. “I learned that there is more of a need for love, care and peace than anything else in our society,” the student wrote.

Rusesabagina’s highly anticipated visit culminated more than 18 months of work by the College of Education and Human Development’s Department of Postsecondary Teaching and Learning to create a First Year Experience for all incoming freshmen in the college. The CEHD freshmen class is the most proportionally diverse at the University of Minnesota, including nearly 40 percent students of color and numerous first-generation college students. The program combines both intellectual and personal development components that invite students to question themselves and the world around them and to see themselves as agents of change. Students are put into groups of learners who can provide mutual encouragement as they acclimate to university life.

Advising and other college-level supports are built right into the first-year seminars, which also feature weekly sessions covering life skills including time management and financial literacy. The reading of “An Ordinary Man” in the seminars was the first common reading to be carried out at the university, and may provide a model for future programs.

After meeting with the College of Education and Human Development students during the day, Rusesabagina spoke to an audience of more than 2,000, including a number of Twin Cities high school students who had read “An Ordinary Man” in their schools. The author reflected on his past experiences 14 years ago and how he learned the power of words both for good and for evil. “I consider myself an ordinary person,” he emphasized. “What I did in 1994 was my duty and obligation to my fellow human beings. I don’t see anything extraordinary in this.”

He also commented on more recent human rights abuses in Darfur and the Congo, saying they were tied to demand for blood diamonds, precious metals, and oil. “Behind every African dictatorship there is always a Western superpower,” he said to audience applause. “Let them know they are not above laws.”

Rusesabagina urged the audience to write the administration and demand it intervene in the Congo, where some of those who perpetrated the Rwandan genocide are still operating. “Why don’t we be the voices for the voiceless?” he asked. “If you don’t want to stand up and make a difference, you are the problem.”