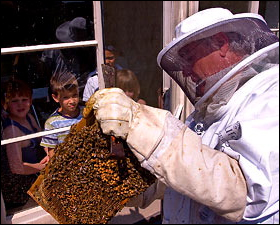 Photo by Patrick O’Leary
Beekeeper Kevin Williams holds up a frame of honeybees to a group of awestruck schoolchildren. The museum keeps a hive of bees on its roof for educational purposes.

Spend five minutes with Kevin Williams and you’ll know why kids love him. Williams, the curator of education at the University of Minnesota’s Bell Museum of Natural History, is bubbly and playful, and keeper of honeybees, scorpions, tarantulas, cockroaches, and other varieties of creepy crawlies—or “really pretty bugs,” depending on whom you ask.

Williams started a bee education program at the Bell about 10 years ago. But his amateur bee-keeping skills proved disastrous (“I just couldn’t keep them alive”) and the bee program fell by the wayside. In 2003, Williams resurrected the program, having developed his beekeeper skills, and today he gets two or three requests a week to bring honeybees out into elementary classrooms.

“I saw right away that bees had a lot of potential for being of interest to the public and [a bee education program would be] such a good blend of agriculture and environmental issues,” says Williams. “The program has grown over the years—mostly through word-of-mouth—and I’m getting more calls for visits because the teachers are all aware of what’s going on [with parasitic varroa mites and the colony collapse disorder], and they know how important honeybees are. About one-third of all of our food is the result of pollination [including fruit, fiber, nut, and vegetable crops]; even the food cattle eat, like alfalfa and clover, are pollinated by honeybees.”

While most museums offer one-hour or daylong educational programs, Williams says the Bell’s niche is cultivating long-term relationships. The Bell Museum was established as Minnesota’s state natural history museum in 1872. It has the region’s largest scientific collections of invertebrates (any animal without a spinal column), mammals, birds, plants, fungi, and insects.

Straight from Kevin the beekeeper’s mouth…

* Honeybees are nectarivores. They’ll collect nectar and pollen from any flowering plant, including weeds like dandelions.

* Yellow jackets and wasps are carnivorous, and in August they can get very aggressive because they’re looking for food to feed their young. They’ll buzz around your soda pop or bologna sandwich if you’re eating outside. They’ll also go after honeybees at this time of the year.

* You don’t have to run away from either wasps or honeybees; just don’t put them in your mouth.

* For the most part, bees arent going to mess with you unless you’re threatening them or intentionally messing with their hive.

* If something does sting you because you’ve been trying to shoo it away, it’s a yellow jacket, not a honeybee—because honeybees are sweethearts.

* If you look at a honeybee, it looks almost like a teddy bear because it’s furry all over. Yellow jackets and wasps are smooth. Bumblebees are also furry, but they’re yellow and black. Honeybees tend to be orange and black or orange and brown.

To learn more about honeybees, visit the U’s Bee Lab.

“When I go out to schools, I usually talk to the teacher beforehand to set up a suite of activities that will support the curricula she or he is working on,” explains Williams, who’s been working at museums for about 35 years—the Bell for the past 26. “I don’t like and I don’t do canned programs. I like to set stuff up and then go out again the following week or in a couple of weeks to interact with the teacher and students.”

For example, he might bring honey-extracting equipment into the classroom for children to extract their own honey, bottle it, and take it home. “I’ve done that a couple times in the past but have had several requests for such an experience this year,” says Williams. “Nothing’s funnier than a class of third graders with 10 gallons of liquid honey. After a couple hours they look like flies stuck on fly-paper.”

In his presentations, Williams also talks about bee research at the U. University entomologist Marla Spivak, for example, has developed a new strain of honeybees called “Minnesota Hygienic” that can keep hives clean and free of the destructive varroa mite.

Williams oversees a colony of 60,000 bees on the Bell’s roof, but he also keeps bees on the back porch of his home in St. Paul, and uses bees from both hives “so I don’t overtax any of the bees.”

Bees, says Williams, are fairly self-sufficient. He checks on them once a week or once every couple of weeks to make sure that the queen is healthy and that the hive looks strong. Then, either in the spring or fall, he medicates them for varroa mites. When winter approaches, he has to wrap the crate-like hive in a cardboard box.

“The bees stay active all winter long,” he says. “They don’t leave the hive but they maintain a very warm temperature inside their hive to keep from freezing.”

In addition to school visits, Williams tempts the elementary students to the Bell by promising himself in full beekeeper regalia. “I line them up against my window and have them close the window after I crawl out in my suit,” he explains. “I then open up the screen windows and show the kids the hive and talk to them about it. I’ll pull out the frames so they can look at the queen.”

For more information about the Bell Museum of Natural History’s bee (and also insect) outreach or education programs, call 612-624-7083. School children can also get up close to the bees at the Bell’s Touch and See Room on the Twin Cities campus in Minneapolis.