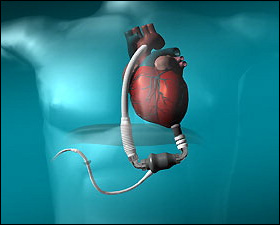 Reprinted with permission, Thoratec Corporation
The U was part of a trial leading to FDA approval of the HeartMate II, a next-generation pump that serves as a bridge to a heart transplant.

William Sowdon was constantly losing his breath and could only walk at a snail’s pace. Laura Huber, at 28, had a rare case of postpartum cardiomyopathy, a condition where the heart muscle is inflamed and doesn’t function well.

The health of Sowdon and Huber was turned around when doctors at the U— home to one of the world’s top mechanical support programs— implanted a left ventricular assist device (LVAD) called HeartMate II. The University of Minnesota Medical Center, Fairview helped conduct the trial for HeartMate II, which the FDA recently approved as a bridge to a heart transplant.

When the device is connected to the heart, blood drains from the weakened left ventricle into a pump designed to take over the ventricle’s work. The result is the full output of a healthy heart. The motor is the only moving part, and it runs continuously on bearings lubricated by the steady flow of blood. The patient carries a lightweight monitor and power unit to regulate pump speed.

Huber’s doctors had predicted she had only a few days to live when she got HeartMate II implanted; now, she says she barely notices the device is even attached.

“I feel like I can run and play the sports I used to,” she says. “It’s been a part of my life for so long now that I kind of forget it’s even there.”

Sowdon has had the device for about three years and has returned to his career as a musical conductor.

How it works
Watch an animation explaining how the HeartMate II takes over the work of the left ventricle.

Although the FDA approval only applies when this device is used as a temporary fix, surgeons are also collecting data on the use of the HeartMate II for patients not eligible for transplant as a result of advanced age and other factors. Early clinical evidence suggests good outcomes for this application, but a two-year follow-up is required for FDA approval.

Ranjit John, surgical co-director of the University’s Ventricular Assist Device Program, was the principal investigator for the HeartMate II trial.

“The remarkable success for patients who received the HeartMate II LVAD clearly shows that we are in a bright and promising new era of options for patients with end-stage heart failure,” says John. “Patients had much improved outcomes, with significantly reduced complications.”

In the case of Huber, she’s inactive on a transplant list for a new heart in hopes that the HeartMate II will repair her heart by returning it to its normal pumping capacity. If it doesn’t work, however, doctors predict the new device has a shelf life of five to eight years, compared to about a year for previous devices. It’s also replaceable.

Learn about the U’s Cardiovascular Center