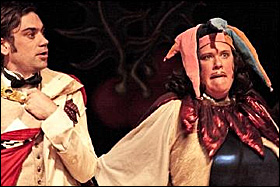 A scene from “The Turducken” at Bedlam Theatre.

The Turducken is a funny play about failure and tragedy, featuring the stories of an inept group of aspiring theater performers who follow their dream and create their own renaissance festival, which fails quickly and horribly. “They’re forced to do terrible jobs for the holidays, and bad Christmas shows,” says creator Josef Evans. The performers watch their lives and families fall apart in fits of profound (and comical) sadness.

The Turducken’s characters and story are based on Chekhov’s classic tragic-comedy The Seagull, which also uses a bird as metaphor, is a tragedy told with humor, and a depiction of human foibles and failure. This, the first full-fledged holiday show ever at the Bedlam, was presented last year as a workshop. Now it’s a full production, with a large cast—also, notes Evans, it’s a musical with big holiday numbers.

“It’s amplified!” says Bedlam co-director and Turducken performer Maren Ward. Ward plays Sir Mucklejohn Magglepop. He’s someone who wanted to be in theater all his life, and he decides to start a renaissance festival in his backyard. It flops. He experiences huge success on Broadway with his play, Men Are Like This, Women Are Like That—but when it becomes a hit, he decides to bring elements of his renaissance festival into the production and kills it. He gets bad jobs as “Santa Corn” and “Stand-Up Santa,” and finally winds up as a cross-dressing lounge singer alone on the holidays, performing in a Motel 8 Airport Lounge on Christmas Eve. All the characters have such stories of fleeting success and then tragic ruin.

Evans was inspired to create The Turducken, during a conversation with Bedlam Theatre co-director John Buecke. “Last year during the summer John and I were talking about terrible Christmas shows, and he thought it would be fun if I made something spectacular.” Later, Evans saw The Seagull and thought it would be a good framework for the story he was working on. “It’s a beautiful play, very funny, and I recognize people I know in the characters.”

The Turducken will be presented from December 11-21 at Bedlam Theatre, 1501 S. 6th St., Minneapolis. For tickets and information, see BedlamTheatre.org.

Ward says Bedlam has enlisted a pottery artist who is making turducken trays for sale with images of the turducken engraved on them, and there will be a photo booth for souvenir snapshots. The Bedlam Bar and Restaurant will be serving a four-course meal featuring choices including brown sugar trout, roast beef with gravy, and pierogis by Bedlam’s Polish-fusion Chef Jim Buecke. “The Seagull and dinner theater don’t go together,” concedes Ward. “It’s kind of a joke, [but] we’ve got this great restaurant and want to serve food as live dinner theater.”

“It will be like Broadway in here!” continues Ward. The story is “ultimately a tragedy, not like a traditional holiday show—but it is funny. We try to counteract the false cheerfulness that goes with the holidays.” She added that “for many, many, years we’ve resisted doing a holiday show. We took December off. Now, we’ve decided to embrace it. Typically in theater, there is the ‘holiday cash cow,’ as it’s commonly referred to. [We are] satirizing that tradition, and yet, we are actually trying to raise money.”

Cyn Collins is a Twin Cities freelance arts and culture writer. She is the author of West Bank Boogie, a substitute programmer at KFAI, and an assistant producer of Write On Radio.

Twin Cities Daily Planet: ‘Turducken’: a play within a play