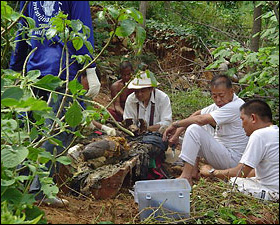 Can you imagine a stranger digging up the body of someone you love, dismembering it, and then cremating the parts or carting them off to an unknown location?

In fall 2005, Hmong refugees living in Minnesota had this mental image to face. Word had started spreading about the desecration of more than 900 Hmong graves at Wat Tham Krabok, a Buddhist monastery in Thailand that served for more than a decade as home to thousands of Hmong families fleeing persecution after the communist takeover of Laos in 1975.

According to Thai government statements issued in fall 2006), the bodies were disinterred because of water quality complaints, and the exhumed bodies were treated with respect and cremated in line with Buddhist Thai tradition. However, Thai government officials failed to explain why Chinese graves in the same area were left untouched, says Barbara Frey, director of the U’s Human Rights Program.

In March 2006, Frey organized a town hall meeting to interview relatives of the dead and to assist them in sharing their grievances with U.N. authorities. In all, 20 undergraduates from Frey’s Human Rights Internship class and two Hmong graduate students collected 159 statements in English, which Frey enclosed with a letter to the U.N. summarizing the complaint.

On Wednesday, December 10, families of the deceased will gather from 9 a.m. to 1 p.m. at Coffman Union Theater on the University of Minnesota’s Twin Cities campus to share their grief with S. James Anaya, the independent expert hired by the U.N., who is also known as the special rapporteur on human rights and indigenous issues.

Anaya will analyze all that he learns from those who testify and report his findings and recommendations to the U.N. Human Rights Council. During his time on campus, Anaya is also scheduled to talk about “Respect for Sacred Sites: Protecting Indigenous Burial Grounds under International Law” at 4 p.m. in 125 Nolte Center.

“We haven’t had face-to-face testimony with a U.N. official before, so [this public hearing] allows the families to tell more in depth what happened to them and what the effects have been on their family,” says Frey.

The Hmong were allies of the United States during the Vietnam War, a fact unknown to most Americans. As a result, the group was branded as traitors and persecuted by local governments. After the war, in fear for their lives, thousands of Hmong people resettled in the United States; many also wound up in Thai refugee camps. Between 2004 and 2006, the U.S. government allowed another 15,000 Hmong refugees to enter the country. Today, about 300,000 Hmong refugees live in the United States. According to 2005 U.S. Census Bureau estimates, California has the largest Hmong population (65,345), followed by Minnesota (46,345) and Wisconsin (38,414).

Approximately 2,000 Hmong refugees are buried on the grounds of Wat Tham Krabok and other private land adjacent to the monastery. Photos and video footage of the grave desecrations, taken by remaining refugees at the camp, show in vivid detail groups of people dismembering bodies, cutting off decomposing flesh, boiling bones, and cleaning skeletons. “If the bodies were being removed for reasons of sanitation,” notes Frey, “they would not have been treated in this way.”

Historical perspective
Prior to the 1800s, the Hmong were indigenous people living along the plains of the Yellow River in China. When the Han took power, they designated the Hmongmiao (barbarians) and started massacring them. The Hmong—a word that, ironically, means “free”—were forced to migrate into the highlands of Burma, Thailand, Laos, Vietnam, and Cambodia.

Frey says at least two petrified or mummified bodies were found, and, according to eyewitnesses, one of them “was taken to a shopping mall and set up like a mini shrine because of the good luck that it was supposed to bring.

“Because of their animist beliefs, the Hmong people view [these actions] as not only a desecration but as [trouble] that has actual repercussions in their lives and the lives of their children,” says Frey.

“One family attributes the death of a niece in Thailand directly to the disruption of the family spirits from the grave desecration,” she explains. “A lot of family members have had the person whose grave was exhumed come to them in dreams and tell them, ‘You need to build me a home’ or ‘You need to help me find my way.’ In part, [the hearing at the U] adds a depth of understanding of what cultural beliefs are with regard to death and burial.” The Hmong consider the body to be sacred and according to tradition it must remain intact in life and death.

Since the desecration has come to light, several delegations of Hmong people have traveled to Thailand to try to resolve the matter. In September 2007, a delegation authorized by the St. Paul City Council included Minnesota state senators Mee Moua and Lawrence Pogemiller.

Explore the history of the Hmong and the activities related to the grave desecration.

“They were able to meet with the abbot from the temple and folks from the local government and the two Chinese Buddhist organizations that were contracted to do the digging to get their side of the story,” says Frey. “The delegation was also able to see the remains of the 211 bodies that had been exhumed, but due to the international intervention had not been cremated. Instead, they were being kept in casks underground.”

Frey says the U’s Human Rights program has been seeking on behalf of the Hmong families a three-part resolution from the Thai government: a declaration that the rights of an indigenous community have been violated, the opportunity to reclaim the bodies, and reparations for expenses related to either reclaiming the body or paying for ceremonies to put family spirits as peace.

“We have great interest in making sure that human rights are respected,” says Frey. “This is an illustrative case of a government stomping on the cultural and religious rights of a minority group, and, in this instance, an indigenous group.”

UMN News: Burial rights: U of M paves the way for Hmong families to find peace