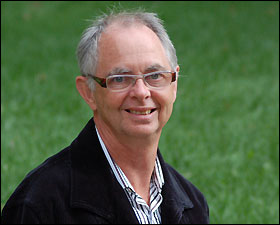 University professor Eric Sheppard has made quite a name for himself in the world of geography. He is considered to be one of the leading geographers anywhere — an expert in the field of economic geography and at the leading edge of figuring out how Geographic Information Science (GIS) can be brought to society in what’s known as “public participation GIS.”

And if there were a field of “academic geography,” he would be known for putting the University of Minnesota faculty even more prominently on the map. For these and many other reasons, Sheppard was recently named a Regents Professor, the highest recognition for a faculty member at the U.

He actually had been nominated for the honor twice before, and at a certain point this spring figured he was being passed over again. Until a call came from President Bob Bruininks — while Sheppard was out in his garden chatting with a Ph.D. student — informing him of the news.

“I was completely shocked. I was tongue-tied; I had no idea what to say,” Sheppard recalls. “It’s the highest honor I can imagine getting. … I don’t think I really know quite what to make of it.”

Others are considerably less tongue-tied in appraising Sheppard and his work. He is described by his colleagues as a “towering intellect, a universally admired educator, and a highly respected leader.”

“I cannot imagine a more gracious, generous, academically stimulating, open-minded, intellectually demanding, and hard working graduate advisor. He was magnificent,” said a former protégé in a letter supporting Sheppard’s nomination. “… Having taken at least half-dozen courses with him, I know his brilliance as a teacher. I remember at the end of one of this lecture courses, Geographical Analysis, in fall 1978 the whole class — about 35 students — stood up and broke into spontaneous applause. One of the students even gave an impromptu speech. I’ve never seen such response like it. …”

His work as a mentor is prolific. Among his advisees are six Ph.D. students who have gone on to obtain tenure-track positions and post-doctoral fellowships at prestigious universities, both in the United States and abroad.

He has been chair of the geography department, the Promotion and Tenure Committee, and the Urban Studies Advisory Committee, and he currently serves as the associate director of the Interdisciplinary Center for the Study of Global Change.

Sheppard also had the honor of delivering the second Regents Professor Lecture in late September — one of a series of talks featuring the U’s highest-ranked faculty members. The series was developed “so that our larger university audience can be introduced — if that’s necessary — to our colleagues,” as well as to the substance of the research they are performing, said Senior Vice President of Academic Affairs and Provost Thomas Sullivan in introducing Sheppard.

His talk, entitled “Geography, Nature, and the Question of Development,” was broad in scope, but touched on a number of hot topics in economic geography.

That there is a distinct discipline known as economic geography might be news to some, which illustrates how the field of geography in general has taken a back seat in American classrooms.

“There is almost no one who comes to an American university who intends to major in geography,” Sheppard says.

Students have the preconception that it’s a field burdened with memorization — a discipline of facts and places. “When students walk into a geography class, they’re surprised by that — [that they won’t have to be memorizing facts and figures], he says, “and the other thing that surprises them is how wide-ranging the discipline is.”

Geography as a part of everyday life
Sheppard was born in Cambridge, England, and his interest in geography came about naturally. His father was also an academic with an interest in the field, and even had connections with the department at Cambridge, and so geography was “in my everyday life as far back as I can remember,” he says.

Plus, the subject was taught in a very different way in England. “You take geography alongside history, year in and year out,” he says. “You’re exposed to it as a discipline … in a way you aren’t around here.”

Their appointments bring the total number of regents professors to 27. The University of Minnesota established the Regents Professorship in 1965 to recognize the national and international prominence of its faculty members. Each regent professor receives a $20,000 salary stipend plus fringe benefits per year and an additional $30,000 research stipend.

After getting his master’s and Ph.D. at the University of Toronto, Sheppard set about to find a job at a university, and had three offers, including one at the University of Minnesota. But at first Minneapolis seemed outside of his comfort zone, especially given the urban unrest in the 1970s. “I was a little nervous about coming to any big city in the United States,” he said. But then he made the trip to Minnesota and met a number of graduate students who helped cement his decision.

If he needed any validation that Minnesota was a serendipitous choice, it probably came less than two years later. In January of 1978, he met Helga Leitner — the woman who would be his future wife — in the southwest corner of the fifth floor of the Social Sciences Building, directly opposite of where his office is now. Says Sheppard: “And the rest is history.”

And geography. Economic geography, one of his areas of expertise, came into its own as a systematic discipline in the 1950s. As time passed, the field changed dramatically away from people trying to explain individual location decisions to having broad-ranging conversations, he says. Now it has at its root “the desire to systematically account for what’s going on in the world and not simply describe it.”

Sheppard points out that in geography there has long been a split — a schizophrenia, if you will — between people focused on quantitative approaches and those who try to account for social and political issues. “I’ve always tried to find space in between,” he says.

And nowhere is that more apparent than his work with GIS and its applications for society. GIS is a sophisticated way of combining layers of data about a place and using that data to answer questions. He wanted to think outside the box to what a GIS might be: “In what ways can the technology we have be used for progressive social purposes, notwithstanding the limitations they might have?”

The result has been “public participation GIS,” which puts the technology in the hands of people, “so that they can decide how they might use it,” he says. In one project with colleagues Leitner and Robert McMaster, Sheppard worked with the Phillips Neighborhood in Minneapolis to produce a series of maps on the Web to depict positive features of and challenges for the neighborhood.

Ultimately, it may take a few more years — a few more professors like Sheppard — for geography to show up on the radar of incoming college students.

But Sullivan provided a light-hearted endorsement of the importance of the discipline, quoting the well-traveled musician Jimmy Buffett: “Without geography, you’re nowhere.”

UMN News: Taking his place: a giant in geography