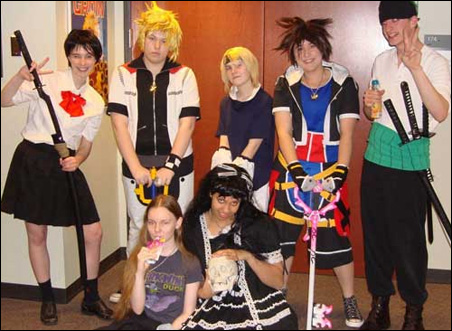 Courtesy of ThreeSixty Journalism
Teens dressed up for Manga Prom at Ridgedale Library.

It is 2:45 on a Thursday afternoon and a group of teenagers are sitting around in a circle at the Brookdale library, laughing and talking. They all have one thing in common: their love for manga — Japanese comic books. They are gathering for their weekly manga club meeting, and are part of a growing trend that is spreading all throughout libraries and schools everywhere.

The advisor, Brookdale Teen Librarian Alicia Anderson, starts off the meeting with a manga-related game; the winners earning Japanese Hello Kitty sodas. They then dive into their discussion of the manga book that was passed out at the last meeting, “The Sand Chronicles.” It is a story with some romance and tragedy, and overall realistic. Manga stories deal with every theme possible, even though they are thought to be mostly science-fiction and fantasy stories.

“The Sand Chronicles” series is a shojo manga, which means it is geared toward females. Therefore, the division between the girls and the boys at the meeting was very obvious as the boys tried to distance themselves with the “mushiness” associated with that type of manga.

They discuss the characters and plot, sharing opinions of which of two boy characters the girl in the story should go for, and compare it to other books and manga, even weaving in some literary concepts, such as foreshadowing. The teens bring up some interesting points, such as how the grandmother in manga stories is always portrayed as strict and severe. Most points are shared by the girls, with the guys occasionally throwing out a thought. The discussion of “The Sand Chronicles” ends with a rating from each of the manga club members, and not surprisingly, it is given high ratings by the girls and very low ratings by the guys.

The club members then work together to pick out a book for next time, deciding to shift from shojo manga back to boy’s manga, shonen. Afterwards, they watch a short clip of the trailer for the movie — or “live action” — version of “The Sand Chronicles,” then hang out and talk for a little bit before going home.

Taylor Miller, 13, an eighth-grader at Brooklyn Center Junior-Senior High School, is an active participant at these manga club meetings. “I really enjoy coming here because you get to talk to people who also like manga, and there are more people to talk with instead of the few at school that have an interest in it.”

She prefers manga to other types of literature because manga is more visual and easier to get into, she said. When asked about the difference between shonen and shojo, Taylor said: “Girls could like shonen, but boys don’t like shojo.”

Anime Mid-Winter Ball
Saturday, Feb. 28, 6-9 p.m.
Dress up, hang out and have a great time — otaku style! Join Ridgedale Library’s Teen Anime Club for a night of costumes, games, anime and music. For teens in grades 6-12. This event is free. No registration required. For more information, call Amy at 952-847-8832. Information provided by Ridgedale Library

“They’re just embarrassed and too shy to admit that they like it. Honestly, most guys can’t even tell the difference,” her friend Hannah Chau, 14-year-old Mounds View student said.

Ron Sundstrom, 15, a freshman at Brooklyn Center Junior-Senior High School, is also familiar with the art of manga. An avid manga reader since the age of 7, Ron is attracted to manga because of its action and interesting storylines, and likes how there are so many different genres. “So many things make it unique, such as the drawings, stories, art, and interesting translations,” he said.

The addition of manga books to libraries is a fairly new thing. Ginger Weil, children’s library assistant at the Park Grove Branch Library in Cottage Grove and enthusiastic manga fan, knows this firsthand.

“Manga first started appearing in libraries around seven or eight years ago, and has increased dramatically in the last five years. Much of this increase is due to the impact of popular anime shows on TV, such as ‘Pokemon,’ and later ‘Yu-Gi-Oh,’ ” she said. “People are attracted by manga because of the variety of stories it provides, and it holds more of a variety of emotions than other types of books.”

When asked about the benefits manga holds for its readers, she said: “Manga gets kids reading more and inspires people to create it themselves, such as through fan drawings. It gives people a feeling of community and expertise, and allows for entertainment and emotional release.”

Brigit Boler is a college student with a huge interest in manga and anime. She is involved with Anime Manga club at Ridgedale Library and attends anime conventions, going out to Bloomington and Coville, Iowa, and even occasionally other states. The popularity of the anime conventions in Minnesota has certainly grown as well. The Anime Detour Convention in Bloomington grew so much, from 1,219 people in 2004, to 3,000 in 2008, that the convention had to change to a larger venue for 2009.

“Five years ago, there were no clubs whatsoever at schools and libraries. Recently, however, there has been a significant growth in manga and anime clubs and events.”

She finds anime very unique, as well as educational. “These kinds of stories are not found in other media, and have many audiences. There is much to be learnt, such as information about the Japanese culture, and there are also many references to things like Greek Mythology and Bible.”

Amy McNally, teen services librarian at the Ridgedale Library, said: “One thing that’s nice about manga is that there are many different books in a series, so once you get into one, you can just keep reading. Also, there’s the visual aspect of it, and they often tie into anime series, so one can get you attracted to the other.”

They also have a group at the library called Cosplay, which means costume and play put together. They dress up like an anime, manga, or pop-culture figure and do role playing: posing, talking, and even fighting as the character would. The Cosplay group at the library even sews their own costumes. They also hold live action role-play games, one of which is called Random Battles. The game works by having several characters on a side that fake fight and attack their opponent based on their own character’s abilities and what would work to defeat their opponent, so they must be very fluent in their knowledge of manga.

The popularity of manga, especially manga clubs and events, has really emerged these last several years, and continues to do so. It is definitely something to look into if you have an interest in manga!