Hakim Abderrezak follows the twists and turns of the North African migration story. 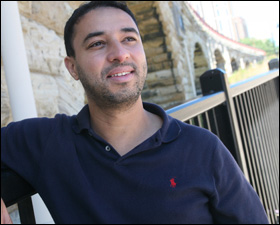 In “Cannibales,” a recent Moroccan novel, a group of North and sub-Saharan Africans gather on the northern Moroccan shore preparing to make a clandestine crossing to Europe.

“All your papers,” demands the captain of the boat that will deliver them to their new home. “Passport, I.D., birth certificate, address book: in short, any document that could be used to identify you.”

One by one, they hand over their identifying documents. All will be burned, they know — a step necessary to ensure that they cannot be deported if they are discovered by European authorities.

Moments like this capture the imagination of Hakim Abderrezak, assistant professor of French and francophone studies. In an age of globalization, Abderrezak says, “African papers link these people to countries that have not been able to offer them the opportunities that they long for. African passports limit.” Burning them sets characters like those in “Cannibales” free from those limits.

A scholar of literature and film, Abderrezak studies the representation of Maghrebis — those who hail from the North African nations of Morocco, Algeria, and Tunisia.

The movements of Maghrebi people to and from Europe and the rest of the world has changed dramatically in recent years, Abderrezak says. “When we used to talk about migration, it was about émigrés going to France. They’d settle, have families, and would not leave because their children were born there and were French,” he explains.

Now the children and grandchildren of Maghrebi immigrants in Europe are increasingly returning to the Maghreb region in order to rediscover their roots. This reverse migration is striking, Abderrezak says: “Some people want to go back to their family’s country of origin because they’ve been shown or told that they’re not completely French.”

Abderrezak is particularly interested in what he calls “illegal literature,” novels about migration in an age when access to Europe has been made tighter by stricter immigration policies.

European media coverage emphasizes this illegality. “Images of distraught men, women, and children being rescued or escorted by the authorities, or of bodies being fished out of the sea, are often seen in newspapers and on television shows all over the world,” Abderrezak says. “The image is monolithic: North Africans are shown as criminals, as invaders trying to breach Spain.”

Literature and film offer an alternative to media coverage, says Abderrezak, and helps the reader and viewer understand the complex and ambiguous experiences of Maghrebis.

Abderrezak’s fascination with the literature of migration stems from his own experiences. The son of Maghrebi immigrants, he was born, raised, and educated in Normandy, France. But as he was growing up, he and other children of immigrants were commonly known as les jeunes issus de l’immigration, or “the generation of youth produced by immigration,” a term that portrayed them as others within their own society.

“It was stunning to be defined that way when you were born in France, didn’t come from another country, and are French according to the law,” Abderrezak says. “That prompted me to look at the novels and films that have tackled this inaccuracy and, more importantly, identify several types of marginality.”

It’s the topic he took up when he migrated across the Atlantic and began doctoral research at Northwestern University. Abderrezak found that when you’re trying to understand identity and culture, distance can lend a needed perspective.

Now that he’s settled in Minneapolis, Abderrezak is looking forward to working as part of a new generation of francophone scholars who are seeing Maghrebi migration in its current forms.

Despite the number of books on Maghrebi migration to France, there are almost no major critical works on contemporary literary and cinematic representations of the migration to places like Spain, Turkey, Saudi Arabia, and the United States. Abderrezak is in the process of remedying that situation with a book of his own.

This article edited from Verve, the magazine of the Department of French and Italian.