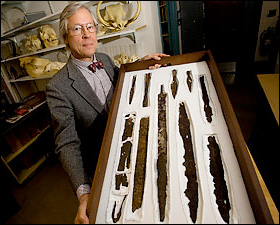 Photo by Patrick O’Leary
Peter Wells holds a sword, dating back some 14 centuries, from the study collection of the Department of Anthropology.

When he died, his men led his stallion to the edge of his grave. With a slash of a sword, they sent the trusty steed into eternity with its master, in a grave that would lie undisturbed for 11 centuries.

He was Childeric, a Frankish king and ally of Rome in the early Dark Ages, a time that saw Roman power wane and the kingdoms of Europe start taking shape. Discovered in 1653 in what is now Belgium, his grave contained many riches, including 300 golden bees inlaid with garnets in a then-emerging style. Overall, Childeric’s possessions bore the clear stamp of both old Rome and a new era of artistry and commerce for Europe north of the Alps.

The life of Childeric embodies University of Minnesota anthropology professor Peter Wells’ challenge to the traditional idea that equates the Dark Ages with war, disorganization, and cultural inertia. Wells lays out the case for his ideas in his latest book, “Barbarians to Angels: The Dark Ages Reconsidered.”

“A lot of our ideas and practices derive from the distant past,” he explains. “People of the past faced the same sorts of problems we face today. If we can learn from them what to do, it may help us deal with our current problems.

“For example, in the Roman period we can study the effects of bad farming practices that led to erosion. Or we can look at environmental problems from cutting down too many trees to [fuel forges] in the Iron Age. Similar issues of deforestation occurred with the Mayans. It helps us put world trade and globalization in perspective.”

Through a glass lightly

That image of the Dark Ages as a time when nothing significant happened and barbarians ran wild comes to us from a few Rome-friendly writers of the time, says Wells. Instead of barbarians, the period was dominated by artisans and tradesmen who may not have written much, but produced a culture rich in material wealth. (The angels of the title come from one shining example of artistic achievement in the Dark Ages: the illumination, or illustration, of biblical texts. Upon seeing such texts in Ireland, the 12-century writer Gerald of Wales pronounced them “the work of angels.”)

In the year 2525
The differing views of the Dark Ages given by texts and archaeological objects beg the question of how our era will be remembered. In our case, accuracy may suffer from a glut of information; Peter Wells sees interesting questions in what will survive and who will decide what to preserve. Plenty is online, but high-tech media may not be readable in the future. In 2000, says Wells, a committee of scientists considering a time capsule for New York’s Central Park decided that pen on paper was the best way to preserve information. So if you want your name to live on, polish that penmanship.

The evidence for this view of the Dark Ages comes not from written material, but from tangible objects like personal ornaments, belt buckles, combs, jewelry, pottery, and swords found in graves and sites of ancient settlements. The Dark Ages acquired their name because we haven’t been able to “see” into them, thanks to the dearth of written material compared to the Roman period, Wells says. The few surviving texts tend to deal with elites and “are by writers bemoaning the weakening of Roman political power.”

The decline in writing during the Dark Ages reflects changes in the political map of Europe. Writing flourished under Rome, notes Wells, because when a society reaches a certain scale of complexity, it must communicate over great distances. Rome unified a grand landscape, and writing played a vital role in record-keeping, taxation, and other functions.

“But the new societies that emerged when the Roman political power declined had no need for writing,” Wells continues. “No such grand scale political empire existed again until Charlemagne. Runes were used in the Dark Ages, but mostly for short messages or identification purposes.

“The whole issue of why some societies use writing and some don’t is a huge question.”

But brooches did plenty more than just hold clothes together. Displayed prominently on shoulders or chests, they trumpeted both personal status and regional identity. Like T-shirts with the home team’s insignia, they distinguished a Frank from members of other Germanic tribes, or an Anglo-Saxon from a Goth.

Tangle in Teutoburg
In A.D. 9, Germanic warriors trapped and massacred three Roman legions in a narrow pass. The Battle of Teutoburg Forest put a damper on Roman military expansion in continental Europe. (Note to Gladiator fans: That battle occurred two centuries later, along the Danube River.) Peter Wells recounts the pivotal event in his book The Battle That Stopped Rome. The victory by the Germanic leader, Arminius (later germanized to Hermann), became a legendary example of underdog Germans standing up to imperial power.

Trade was alive and well during the Dark Ages, as finely wrought vessels of gold, silver, and bronze, along with some weapons, came from the Mediterranean and beyond and were fashioned in specialized workshops. A Swedish scholar has argued that there must have been political stability throughout Europe to support such a wide trade in such objects, not to mention the large numbers of shops and crafts workers.

“As [attractive] products became available, people worked harder to get them by growing surplus crops, mining metals, and making leather and textiles,” says Wells. “There’s lots of evidence for weaving.” And thus was a brisk economy born.

The Dark Ages are, of course, a modern creation, as history continues seamlessly. The period is generally regarded as ending with Charlemagne, who was crowned Holy Roman Emperor in Rome on Christmas Day 800. His reign marked the dawn of a new era of literacy, but not a complete break with Dark Ages practices.

“One could see Childeric as a predecessor of Charlemagne, showing many of the same features,” muses Wells. “He just didn’t have as good a publicist.”

On December 2, 1804, almost exactly one millennium after the crowning of Charlemagne, Napoleon Bonaparte had himself crowned emperor of France. Seeking to bury the memory of the Bourbon kings and their fleur-de-lis emblem, he had an apt symbol of France’s ancient power sewn into his coronation robe: hundreds of golden bees.

Childeric would have been proud.