In every walk with nature one receives far more than he seeks. 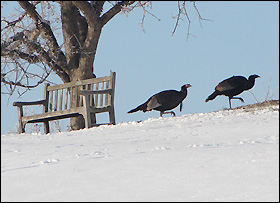 Courtesy of UMNews
Turkeys trot away from a solitary bench at the Minnesota Landscape Arboretum.

John Muir said that, and I suppose he would know. He took many walks, perhaps the most notable — one of a thousand miles. Most of us drive today, or at least, we take far fewer walks.

Nature requires a patience and attention difficult to pay in this age of deficit. For many in the city, such a nature deficit disorder might benefit from being the next entry in the American Psychiatric Association’s DSM-V. Perhaps by cataloging it as a psychological illness, nature would receive its rightful recognition.

To be sure, there is not a deficit of nature at the Minnesota Landscape Arboretum. The sights, sounds, and smells inspire patience and observation with more than 1,000 acres of gardens and landscapes, 5,000 plant varieties, and natural areas from woodlands and wetlands to prairie. And it’s a great place to take a walk—just ask arboretum research fellow Julia Bohnen and naturalist Matt Schuth. Or better yet, take a look at their ever-evolving creation, the Nature Notes blog.

Since late summer 2008, their observations throughout their daily work at the arboretum have been taking shape online. It used to be that Schuth and Bohnen, both longtime employees of the U’s arboretum, would literally post paper notes on a “Nature Notes Board” in the lobby of the Visitors Center (in fact, they still supplement the blog with paper notes for those who visit in person). Other staff and even visitors to the arboretum are encouraged to submit their own comments to the blog. The writing is borne of part habit, part altruism, and all nature’s inspiration.

“For my part, I have journaled nearly all my life…it is therapeutic for me, especially when combined with being outdoors,” says Bohnen. She’s committed, and if a particular day of work doesn’t allow enough quality nature time, Bohnen will go for a walk at the day’s end, making sure, of course, to take along a pad of paper.

“The moon was half full when I walked at Spring Peeper last night after dark. A bright planet, perhaps Venus, was in the sky to the west of the moon. The western horizon had a pale blue wash from the setting sun. Overhead the few stars that were visible were caught in a streaked web of thin clouds. The night was calm and mild; just a breath of air stirred the leaves on the oak trees. In the moonlight, I could see the tracks of rabbits and other meadow inhabitants. On the Oak Knoll the oak trees were silhouettes in the moonlight; the large mature oaks seemed to be reaching into the sky and grasping for the stars. The shadows cast by the oaks laced the patches of snow in a network of gray threads. The snow crunched under my boots, my toes caught under the crust on each step.”

Schuth, who has managed the maple syrup operation at the arboretum for the last 18 years, also contributes to the blog. His inspiration no doubt grew from an early education. “I grew up on a farm in Wabasha, Minnesota, so I have been in nature most every day of my life since I was a wee tot,” says Schuth.

For their readers’ sake, Schuth and Bohnen hope that the blog will inspire them to come and take a walk, especially in the less developed parts of the arboretum, where untrampled nature awaits. “Now, when we note that the snow trilliums are blooming you could read it on the blog and come out to see them yourself,” says Bohnen.

Of course, it is understandable if lately, the cold has uninspired your desire to venture outside.

“Ahhhh, winter. When you are prepared for it and dressed appropriately, it can be a real pleasure. Today I got out and kicked around in the snow. With the cold temperatures, the snowflakes have not lost their sharp edges and loft. Down in the meadow the snow was up to my knees. It will be insulating all the little animals deep down inside. The snow is mounded over the bent sedges in the meadow creating soft shadows and illusions of larger rolling landscapes. The snow that fell overnight and early this morning is still clinging to the plants.”

The opportunity for inspiration is ceaseless, insists Bohnen. “Even tasks such as spraying weeds can provide a good opportunity to see cool stuff,” she says. (Likewise, I do believe I’ve heard that even the mundane act of doing dishes provides a good opportunity to look out a window and with warm hands watch the wonders of the natural world, but I have an automatic dishwasher and could not say for sure.)

Bohnen’s work at the arboretum and on the blog is in consideration of future generations, too. A restoration area she manages began as a hay field and a cornfield, she says. She worked to reintroduce a plant community to the land. “Part of the restoration process is based on scant notes and records from times long past,” says Bohnen. “If those records had been more detailed our efforts at restoration could be better. I hope someday that my notes might be part of a significant record of nature at this time in this place.” Rest assuredly, snow trillium, that these notes will survive the winter.

“Today during a windy blustery day Les noticed that a European starling had taken refuge in a barn swallow nest under the eaves of the old apple house at the HRC (Horticultural Research Center). The nest is tucked way up under the peak of the building and may have felt like a reasonably comfortable hideaway from the flurries for this cavity dwelling bird.”

The Minnesota Landscape Arboretum has 8.5 miles of cross-country ski trails and 1.25 miles of snowshoe trails in the winter.