THE COLLEGE OF ST. CATHERINE 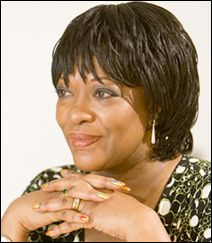 Poet, novelist, short-story writer, playwright — Pulitzer-Prize winner Rita Dove has gained wide acclaim for a lifetime of work in multiple media. But the former poet laureate of the United States is best known for her poetry — lyrical, narrative, often historical, which elevates and celebrates what she calls the music of the language even beyond the sense of the word.

Dove will be in St. Paul March 5 to address the St. Catherine Forum on Women in Leadership, an annual series of women speakers whose purpose is to support the ongoing mission and goals of St. Catherine. She also comes as the inaugural Bonnie Jean Kelly and Joan Kelly Scholar-in-Residence at the college. Her forum topic? “The Poet as Leader.”

Currently the Commonwealth Professor of English at the University of Virginia in Charlottesville, Dove won the Pulitzer Prize in 1987 for her collection of interrelated poems “Thomas and Beulah,” loosely based on her grandparents’ life.

She became the youngest poet laureate of the United States when she was appointed in 1993, serving until 1995, and became special consultant in poetry for the Library of Congress’ bicentennial year in 1999–2000. In 2004 she was named to the two-year position of poet laureate of the Commonwealth of Virginia. The list of her literary and academic honors is pages long.

Q. What does it mean for a poet to lead?

A. Schiller once said that poets were the unacknowledged legislators of the race. I think that what he meant was you lead by reminding people of themselves. If I read a poem that moves me, it illuminates or reminds me of something in myself that I was too busy to see.

Poetry makes us reflective beings. It teaches us how to proceed more deftly and gently in life. That’s what a leader should do in any kind of arena: show how one should behave.

Q. What could leaders learn from poetry?

A. I would hope that people would listen to what a poet says. As a writer or an artist, you are a human being thinking in a different way and it’s valuable. In this country writers are rarely asked.

We have a great example now in this country. When Barack Obama was elected he touched an area in our hearts that politicians usually don’t bother with or it’s difficult to get to. He reminded people that spirits could soar; as Emily Dickinson said, “Hope is a thing with feathers.”

I believe that Michelangelo or — choose your great artist — thought of the individual standing there who is nobody, not someone you need to impress but who you want to connect with. If leaders could try to remember that, it would make them happier human beings. But of course it calls for bravery.

Language is astonishingly powerful. So often when people get disaffected with leaders they detect in the language that it’s not sincere. What politicians could learn is the immense power of the word placed correctly. Language is not black or white, this torpid thing on the page. When we read, it shapes our breathing, the way we feel. When we read the word “moon,” we can almost feel the howl.

Q. Do you have an artistic agenda?

A. When you are an artist the only agenda is to do the best you can regardless who it riles, regardless of whether it’s “p.c.” Being the consummate artist is your job. If the subject grabs you, you feel like you have to do it, then you have to do it. I tell students you really have no choice in the matter, you have to try. But that doesn’t mean you have to show it to anyone.

Q. Your about-to-be published book, “Sonata Mullatica,” is a departure for you.

A. It deals with a mulatto violinist from the 19th century. There were a dozen reasons not to write it. It isn’t lyrical; it’s more narrative; everyone in it is a male it seems. As a devout feminist, I’m tired of giving men the front seat. But I couldn’t not write it because it was absolutely necessary. I learned things about myself and the male psyche I wouldn’t have known if didn’t do it.

Q. With your many volumes of work, you make poetry look easy. Is it?

A. I think that it’s all good to sit with the blank page, but it’s also like any other artistic endeavor. Being prepared makes you ready for when inspiration strikes. I keep a notebook with me at all times. I tend to gather these seeds as I go along. I feel obligated to write them down. It doesn’t seem hard as long as you pay attention to the world.

The hard part is getting it out of the notebook. By keeping snippets in the notebook, by piecing together the invisible tuggings under their surface — that takes all the silence and concentration to do. It’s an absolute mystery to me. Thank goodness.

The St. Catherine Forum on Women in Leadership luncheon is 11:30 a.m. to 1 p.m., Thursday, March 5, at the Crowne Plaza Riverfront Hotel in downtown St. Paul. Individual tickets are $45, student tickets are $25 and table sponsorships are available. To register, visit the Leadership Institute or call (651) 690-6819.