Heart beating three times a second, Ben Greenwald stops skiing – but not to catch his breath. With his heart pounding in his chest, he pulls out a .22 caliber rifle and tries to keep his hands steady for an accurate shot.

He lies down in the snow and fires. He adjusts for four other targets and lets off as many shots. He hits all of them, and white metal plates flip up to cover the 4.5-centimeter black targets.

This is biathlon, a competitive sport in which athletes combine the skills of cross-country skiing and rifle sharp-shooting. Greenwald, a 17-year-old from Minneapolis, took up the sport about three years ago.

“The feeling in biathlon when competing is much different than any of the other sports I do because everything needs to be calculated much more,” Greenwald said. “You need to stay focused at all times. There’s always a fine line in the skiing section of going too easy and losing time and going too hard and missing your shots.”

Greenwald, who attends St. Paul Academy and Summit School, is a competitive athlete in not only biathlon but also Nordic skiing, cross country running, track and field, triathlons and duathlons.

“Biathlon is a difficult sport in terms of sheer will power needed to be successful at it,” Greenwald said. “Biathlon challenges me more than any other sport and this is my motivation for doing it.”

Greenwald likes the intensity of biathlon, and all of the skills it demands you bring together. Running, he said, requires major physical ability. Basketball requires skill. But biathlon requires you use all the skills different sports demand of athletes in order to have a good race, he said. 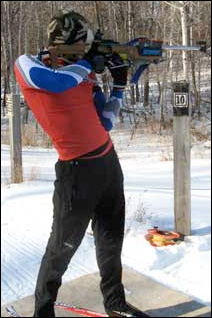 To prepare for races, Greenwald practices dry firing every day. Dry firing is, according to Greenwald, “a way of working on muscle memory through the repetitive motion of shooting. It is exactly like shooting but no bullets are used and the targets are shrunk down so one can stand closer to the target, but it looks” the same.

Greenwald is part of the youth division of biathlon, which includes athletes 18 and younger. “I compete at the national level right now, but may make the national team and head to international competition,” said Greenwald, who is a member of the Minnesota Biathlon Team.

He competes in about a dozen races each winter in places like Coleraine, Minn., and Canmore, Canada, just west of Calgary.

In a biathlon competition for the youth division, the competitors ski 7.5 kilometers or 15 kilometers and shoot five shots, twice or four times respectively. Half of the shots are done standing, the other half in the prone position, or lying flat on the stomach.

According to USA Biathlon, the sport traces its history back to Scandinavia where people both hunted food and guarded boarders on skis. The first ski club formed in Norway in 1861 to promote national defense, according to its website.

All of his training has paid off for Greenwald, who went to the U.S. National Championships last year and took seventh place. Greenwald went to the Biathlon Youth and Junior World Championships this winter — a step up in competition — with hopes of making the junior world team. He made a competitive showing, but unfortunately was unable to compete at his highest level due to injuries, he said.

“Not making the junior world team this year was disappointing but it does not change my long-term goals,” Greenwald said. “I still plan on ending this season with a strong showing at nationals, and then continuing to improve and work my way up nationally and internationally. I plan on being on the senior national team and maybe one day being in the Olympics.”