THE COLLEGE OF ST. CATHERINE

For years, Minnesota has outranked most other states for its percentage of women in the workforce. An extensive new study shows, however, that proportional numbers of women are not making it to the upper echelons of business leadership in the state’s top public companies.

Sixteen percent of Minnesota’s 100 largest publicly held companies have no women corporate directors or executive officers, according to research conducted by two professors in the College of St. Catherine’s Master of Arts in Organizational Leadership (MAOL) program.

Twenty-eight of those 100 companies — including Lawson Software, Life Time Fitness and Nash Finch — had no women on their boards at the time the research was conducted. Findings were based on Securities and Exchange Commission (SEC) filings as of June 30, 2008.

Women hold 16 percent of the available positions as executive officers in those companies. Among the state’s sixteen Fortune 500 companies, SuperValu, Target Corp. and United Health Group show the most gender diversity in their boards and executive suites, with Target topping the list.

“This is the first step,” says report co-author Rebecca Hawthorne, Ph.D., director of the MAOL program at St. Kate’s. “We want to take this to the Minnesota Business Partnership and engage the chief executive officers, who are predominantly male, around this topic.” 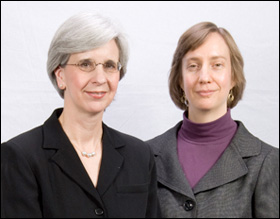 The report shows that Minnesota ranks third out of 11 states or large metropolitan areas that have conducted similar research over the past several years. Only New York and Chicago have a higher percentage of women on their largest corporate boards.

Hawthorne and her co-researcher, Joann Bangs, Ph.D., an assistant professor of economics at St. Kate’s who also teaches in the MAOL program, recently discussed the findings.

What surprised you about this research?
“That it’s just one woman so often,” said Bangs. “I expected a number of companies that wouldn’t have any women directors, but I was surprised at how often it just stops with one. I suspect the attitude may be: ‘We filled the women’s seat. Let’s move on from there.'”

Isn’t one woman at least a good beginning?
“Research conducted by the Wellesley Centers for Women shows that real change occurs when there are three or more women’s voices on the board,” said Hawthorne. “The women then feel free to disagree. You start being individuals instead of representatives of your gender. The women become better at making sure the other women are heard, even when they were disagreeing. They had that support there.”

Women overall have made strong gains in the workforce in the past 30 years. Why are they still hitting a glass ceiling in the top tiers of corporate leadership?
“Research has begun to identify a whole host of reasons,” said Hawthorne, “everything from bias to linguistic research that points to the inflection in women’s voices, which men perceive as more emotional, more tentative, less forceful.

“And there’s the traditional profile of board of directors candidates. Most companies are looking for sitting or retired CEOs. The number of women who fit that profile is very small.”

So, where should companies look for women to be members of their boards?
“National research shows that we have strong women candidates for board positions who are entrepreneurs, executive directors of nonprofits and presidents of universities,” Hawthorne said. “These are women who have developed that executive skill set in many venues, as well as in corporate America as executive officers, whether in marketing, traditional human resources work or operational work.”

“There are many more qualified women than just the few who are sitting or retired CEOs,” said Bangs. “The need is to broaden that image.”

A cynic might say that is lowering the standards.
“It’s redefining the profile,” said Hawthorne. “People of different expertise have different things to bring. One of the surprises for me in the research was the homogenous profile of so many boards. They’re made up of men, in their 60s and 70s, who are white and retired CEOs.”

The reported cites 13 companies on its “honor roll” because women make up at least 20 percent of their board members and executive officers. Did you see any similarities or patterns with these honor-roll companies?
“No, and that’s great,” said Bangs. “They’re small and huge. We have technical, retail and financial companies, as well as health businesses. There’s nothing particular about these companies that makes them a good fit for women.

“MTS Systems is a perfect example. Like Target, it has a board and an executive suite with 30 percent women. But it’s a technical company, with a woman CEO.”

Did the size of the companies have any effect?
“Reports from all the other regions of the country show that larger companies do tend to have a higher percentage of women directors and executive officers,” said Hawthorne. “Our sponsors were convinced that smaller Minnesota companies would have more opportunity for women, but the opposite was true.”

Are there consequences for recruiting and hiring?
“Absolutely,” said Bangs. “The younger generation frequently asks about women in the top tiers of management or on the board. They’re looking for role models. A study by Pepperdine University shows that having women on the board attracts investors. It’s seen as a progressive statement, that you’re a company worth taking a look at.”

How is this report going to benefit St. Kate’s students in the MAOL program?
“This research puts leadership front and center,” said Hawthorne. “Certainly it focuses on women’s leadership but also the leadership of both women and men, which is what MAOL is all about.

“Our program also has a research focus, which is different from many MBA or master’s programs. All students are required to do a piece of independent leadership research as a capstone experience toward the degree.”

What is your primary conclusion, after all of this work?
“It’s a rational argument to say that women represent 50 percent of the population,” said Bangs. “And all of these companies, not just the ones that serve women primarily, should pay attention to this.”