Ishay Hadash is a tennis machine. The top player for the Gophers, he has lumberjack shoulders, sinewy forearms, and legs that resemble tree trunks, all of which fortify his power game. And brother, he lays it on you with authority.

Hadash may have been raised in a small town — “even Israelis don’t know where it is,” he says — but his game resounded across the ocean. Scholarship offers flooded in. He knew about the University of Minnesota (he has relatives in the area), but did he really want to move from the Middle East to the Midwest? Hadash, who plans to major in economics, took a recruiting visit and found a lot to like: the gorgeous, state-of-the-art Baseline Tennis Center; a persuasive and successful coach, Geoff Young; and a program with a storied legacy that includes 14 Big Ten titles and seven All-Americans. And guys like himself: machines from foreign shores. Tobias Wernet was one.

“I remember we took him to the Mall of America,” says Wernet, a sophomore from Germany who plays No. 2 on the team. While strolling around the Wimbledon of malls, Wernet assured Hadash that the U would be a good choice for him: The people are welcoming and the team is going places. Hadash was convinced. He signed and has been intimidating opponents ever since.

Hadash and Wernet are just two of seven international players on this year’s resurgent 12-man squad. There is also another German, another Israeli, a Colombian, a Croat, and a Slovak, plus five Americans — three from Minnesota, one from Florida, one from Kentucky. It’s a veritable UN in short pants. And they can play.

While last year’s team limped to a 7-17 record, this year the club is showing signs, after sweeping Marquette and DePaul in its first two matches, of making waves in the Big Ten. “We have six freshmen so we’re young, but we’re talented and deep,” says Young. “And having Ishay helps.”

Nearly every Division I team has an Ishay. As of early February, 64 of the top 100 ranked college players, nearly two-thirds, were foreign. There are myriad explanations for this, the most prevalent being that in the United States, top young athletes tend to play other sports, like football and basketball, while internationally, tennis is still a top attraction. Whatever the reason, the numbers are undeniable. And the U was among the first to see it coming.

“It started for us in 1979 when Hakan Almstrom wrote me a letter,” says Jerry Noyce (B.S. ’67), who coached the team from 1973 to 1988. “He was the national junior doubles champion in Sweden and was high-ranked in singles. We offered him a scholarship and he was great, and he introduced us to Stefan Erikkson, who was also a gem. They really established our Swedish connection.” 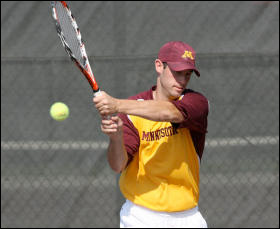 Noyce kept recruiting Swedes during the 1980s, and boom, Minnesota started winning Big Ten titles, three in six years. Once the floodgates opened, players from all over the world — France, Ecuador, India, you name it — came to the U. And now all Division I programs are thick with accents.

This doesn’t thrill everyone, namely American parents who want their sons — many of whom were accomplished high school players — to get plenty of playing time in their intercollegiate careers. This can put coaches in a delicate spot. If they want to win, and keep their jobs, they have to play their best players, and that often means going with the international student athletes. Yet these are American universities, not professional leagues. There are no formal restrictions but most coaches shoot for a 50-50 balance, which is about what Young has on the Gopher squad.

Adam Altepeter isn’t complaining. A fifth-year senior in accounting and finance from East Grand Forks, Minnesota, he plays sixth singles, the lowest rung on the ladder. Internationals have played above him every year, and they got the scholarships while he’s on his own dime. But he wouldn’t change his experience. “I’m not from the most diverse area so it’s been great to get to know people from different countries,” he says.

Like Hadash, Wernet is gifted. He goes left to right like Australian tennis great Lleyton Hewitt, and has a sledgehammer of a two-hand backhand. Tennis gave him options as a lad in Germany — just not in Germany.

“There’s no college sport there. You either go to a university to study or you go pro. I wanted to do both. I found out in America you can combine them,” says Wernet, who is majoring in international business. He landed here through the recommendation of a recent former player from Germany, Raoul Schwark. He won 17 matches last year and his first four this year.

Another indication the program is on its way back stands in the shoes of another recent import, this one with a familiar last name: Hadash. Jonathan, Ishay’s younger brother, arrived in mid-January and is starting to get matches. Ishay is obviously thrilled to have him here … sort of. “It’s OK,” he says with a big-brother shrug.

Coach Young is more enthused. “Right now he’s not at the same level of Ishay, but he’s talented and is going to improve,” he says.

The same is true of freshman Michael Sicora, a promising two-time state champion from Buffalo, Minnesota, who plans to major in general management. He started the season 3-1 and has proven that he is not overmatched on this level. “He plays good tennis,” says Young.

Which is what it’s all about. No matter where you’re from or what your background, the net is the same three feet for everyone. And that holds true in any language.