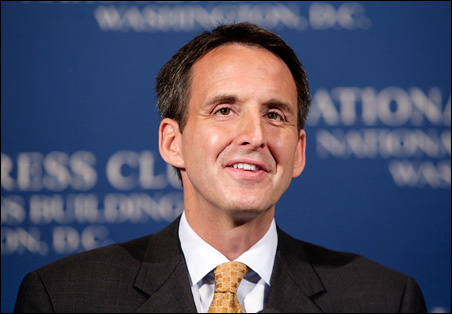 This contest is now closed. See below for winner and honorable mentions.

Rumors are flying about our governor’s potential presidential run. Supporters and critics have both been following his actions during this tumultuous legislative session.

MinnPost followers on Twitter, your task is to come up with Gov. Pawlenty’s campaign slogan in 140 characters or less.

The Twitterer with the best slogan will receive four tickets to this Saturday’s St. Paul Saints game against the Sioux Falls Canaries for “Re-Count Night.” Forty Years of “Sesame Street” with everyone’s favorite character: The “Re” Count. “Re” Count Giveaway (for the first 2,500 fans) is presented by TDS Metrocom and MinnPost.com.

impactmax We’ve had Pawlenty of nothin’, and nothing’s Pawlenty for U.S. #mp140

NickColeman T-Paw 2012 Slogan: DEATH BEFORE TAXES! Um, that’s YOUR death, MY Taxes. How am I doing, Grover?

MNProgressive #mp140 TPaw for Prez: putting a friendly face on failed policies since 1999…but at least he’s caught a walleye.

impactmax We’ve had Pawlenty of nothin’, and nothing’s Pawlenty for U.S. #mp140

allendodd No New Taxes (that you can attribute directly to me). I have plausible deniability. #mp140

cmnsensepolicy Pawlenty 2012, you thought he was hard on MAK and Poge, see what he has in store for Nancy and Harry! #mp140

DanLWhelan Pawlenty 2012: “Survival of the fittest. And the rich. Well … maybe just the rich.” #mp140 #awesomesauce

panndder Pawlenty 2012: No thanks, I don’t need to work with the legislature. #mp140

CarlBrookins VOTE FOR ME, I’LL RUIN EVERYTHING #mp140

princewally Breaking promises to my core demographic since 2000. But this time is different.

tonimiddleton Pawlenty 2012: Minnesotans are kicking me out; please, America, give me a new white house. #MP140

gormsby Pawlenty 2012: The audacity of …well…just the frackin’ audacity. #mp140

NickColeman T-Paw 2012 Slogan: DEATH BEFORE TAXES! Um, that’s YOUR death, MY Taxes. How am I doing, Grover?

megalomac Tpaw is smart, Tpaw is cool, a vote for Tpaw is a vote for you #tpaw #mp140

christruscott Pawlenty for (Red State) America: Because We Can Do Better Than Wasilla — Barely #mp140