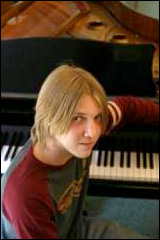 Jade Sanstead, 18, felt under-challenged at his high school in the small hometown of Rothsay, Minn., near Fergus Falls. He wanted to learn Norwegian and pursue linguistics, but neither was offered at his school. Through Post Secondary Enrollment Options (PSEO), Sanstead was able to take courses at the state college in Fergus Falls beginning in his junior year. Even then, he felt that he wasn’t challenged enough and the state college didn’t have the kinds of courses he was hoping to take, such as Norwegian. In this — his senior year — he moved to the Twin Cities to take classes at the University of Minnesota.

Lon Laager, who was Sanstead’s PSEO adviser at Fergus Falls, said the PSEO program worked great for students ready for more challenging classes and a taste of college.

Laager said that PSEO was the ideal choice for Sanstead. “He’s a really sharp kid,” said Laager. Laager said that for kids like Sanstead who come from low-income families, the PSEO program is a great way to earn college credit for free. Though it was Sanstead’s idea to transfer to the Twin Cities campus in order to finish his transfer degree, Laager said he encouraged him. “For him it wasn’t difficult,” said Laager. “He did his own legwork.”

Sanstead said that though he had enough high school credits to graduate in January, he put off graduating so that he would be able to take advantage of the tuition-free PSEO program by studying full time at the University of Minnesota in the Twin Cities.

Laager said that smaller schools, such as Sanstead’s old high school in Rothsay, sometimes have a difficult time being supportive of the PSEO program because they don’t want to lose the numbers of students, not to mention the best and brightest pupils. While a high school is guaranteed 12 percent of the cost of each student for administrative purposes, the school will lose money if it teaches fewer classes due to lower enrollment, according to Etheridge.

Students from rural areas also have a disadvantage in that while the PSEO program will reimburse students for gas mileage, it won’t provide housing. Students such as Sanstead, who want the more rigorous classes and expanded course options that the University of Minnesota provides, have to figure out housing on their own.

PSEO was established by the Minnesota legislature in 1985 to give high school students the opportunity to earn postsecondary credits while completing high school graduation requirements. In traditional PSEO, students attend college or university classes for which the institution is reimbursed $179.57 per semester credit, according to Steve Etheridge at the MN Department of Education. Concurrent PSEO, otherwise known as College in the Schools, allows high school teachers to teach college level classes in the high school classes where students can receive college credit. In 2007-2008, 7,247 students were enrolled in traditional PSEO classes, while 17,581 students were enrolled in concurrent programs.

Etheridge said PSEO is paid for from the state’s general fund. This year, the state has paid roughly $21,200,000 for PSEO programs at 66 participating colleges and universities, according to Etheridge. “Supposedly [PSEO] is not supposed to run out of money, but I don’t think that’s going to happen anymore,” Etheridge said, referring to looming budget cuts.

“Whether [traditional PSEO] is a good option or not is dependent on the student,” said Etheridge. “If you are not ready, it’s a terrible option. Your high school transcript is the most important basis for college applications and job applications.” Etheridge said that a student should strongly consider the grades he or she would receive in a PSEO class before deciding on that option. Etheridge said that he encourages students who might not be ready for the college setting to take advantage of the concurrent program. In the concurrent program, students are working with teachers who already know them, and they get a lot more one on one attention.

Next fall, when Sanstead is officially a University of Minnesota student, he will be eligible for work study, scholarships, and student loans. Until then, he has to figure out a way to scrape by. “My family is fairly poor,” Sanstead said. His father is an auto body specialist and his mother, who was unemployed for much of last year, is currently working three different jobs to make ends meet.

Before he left for the Twin Cities, Sanstead gave three piano concerts at churches in his home area and raised $2,000. While Sanstead has chosen not to pursue music as a career, he can play concert level pieces. Right now he is focusing on works by Grieg.

Sanstead has been trying to find a job to cover his living expenses and rent, but as an 18-year-old without a high school diploma, he is having a rough time of it. He wanted to work at a coffee shop, but quickly learned that there were no jobs available. Some places, such as Dunn Brothers, won’t even let you apply if you haven’t finished high school. After trying Starbucks, Caribou Coffee and other coffee shops, he had to abandon the hope of being a barista. He applied at Barnes and Noble, Target, Wal-Mart, and Menard’s, as well as for different music positions at churches and restaurants. “I’ve become extremely frustrated,” he said.

Currently, Sanstead donates plasma twice a week, which pays $40 the first time and $45 the second. A few times, though, he was rejected because his temperature was too low or there was something wrong with his heart rate.

Sanstead fears that he may eventually have to sell his piano, which stayed back in Rothsay. Though it was a gift from his mother, it is in his name and she has told him he can sell it. He won’t, however, sell the digital Yamaha Clavanova in his current apartment. He plays the digital piano at least three hours a day. “I don’t know how I’d be health-wise if I didn’t have a piano,” Sanstead said.

In the meantime, Sanstead looks for a job and studies hard at his classes. He has made friends at the university, many of whom don’t know that he’s actually a high school student. He’s looking forward to the fall, when he’ll be able to get financial aid, and receive more of the perks of being a regular student.