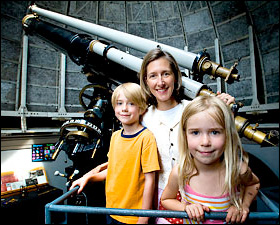 Astronomy graduate students are an intrepid bunch. They must have a good command of math and physics in order to master the science, and lord knows they pull a lot of all-nighters. From the word go, they are steeped in a graduate school culture that demands utter devotion to study and research.

Kristen McQuinn knew that as she faced the University of Minnesota’s director of graduate studies (DGS) in astronomy. Since college she had spent 12 years out of academia, she had two kids in diapers, and she was asking to be admitted to doctoral study — heresy of heresies — part time.

“I was straight up about it,” she recalls.

The odds against her looked astronomical. Except the DGS on that day in 2001 was Evan Skillman, who, true to his chosen profession, took a farsighted view.

“He was encouraging about me applying,” says McQuinn, who has just finished her fifth year of graduate study with Skillman and hopes to complete her doctorate next year.

And how has she done? Let’s put it this way: During graduate school, a budding astrophysicist can reasonably expect to be the main author on perhaps two or three research papers. McQuinn has just notched three, and sometime this summer the number will rachet up to five.

If her story shows anything, it’s that enthusiasm trumps all.

Crooked path, right destination
“One theme runs through my life: I’m not just going to settle for something,” says McQuinn, who began her scientific journey as a physics major at Lehigh University. But she soon switched to mechanical engineering, a major with more job potential.

After graduating in 1986, she took a job with a large firm,working in business management consulting and building computer systems.

“That felt good in a way then, because I’d defined success as a business model — you take the train to work, carry a briefcase, and so on,” says McQuinn. “But when I got into it, I didn’t really like it. It didn’t hold a lot of meaning.”

Quitting that job, she traveled the world and then took a job with an environmental consulting firm, thinking it would be more meaningful to “do something altruistic.”

“But the ideals of what you think you’ll effect aren’t necessarily reality,” McQuinn notes.

She found herself reading physics books and magazines in the evening. Then, while living and working in Buenos Aires, McQuinn decided she really wanted to be an astrophysicist. She had been out of school nine years, but was accepted to a master’s degree program at Boston University. Graduating after two years, she followed her husband to Dartmouth College, where he earned a business degree and she had two children, then to Minneapolis after he landed a job with General Mills.

The new location “just happened to be near a large university with a high-caliber astronomy department,” McQuinn muses. On one visit to the U, she had her fateful conversation with Skillman, and soon she was back in graduate school — after three years at home with kids.

From childbirth to star birth
McQuinn owes her enduring fascination for astrophysics in part to the vastness of human ignorance about the cosmos.

“It’s an impossible task to understand any field of science,” she says. “Many people are chipping away, but there is always some more to explore and understand in the universe.”

In her most recent paper, McQuinn used Hubble Space Telescope data to settle a point about how galaxies evolve.

She studied regions of small, nearby galaxies undergoing a “baby boom” of new star births. Called starbursts, these areas had been considered local features that die out after about 10 million years (the blink of an eye for a galaxy). But McQuinn found evidence for starbursts that sweep through entire galaxies, lasting 200 million to 400 million years.

“[The time scale of starbursts] resolved a controversy,” says Skillman. “It’s an important number that there wasn’t enough debate about.”

Starbursts are triggered when two galaxies get close enough to warp each other with their gravity, says McQuinn. Thus, they probably were more common in the early universe, when galaxies were closer to each other and hydrogen — the fuel of star formation — was more abundant.

Those ancient galaxies can’t be studied, “so studying these [nearby galaxies] gives us a window into the distant past and clues as to how galaxies change and evolve,” McQuinn says. She also hopes to discover whether starbursts ignite individually or in a chain reaction, like fans doing the wave at a stadium.

Meanwhile, the Milky Way may be starting to experience a starburst right now because a small galaxy is merging with our galaxy and warping its disk, she says.

Not the whole enchilada, but …
For McQuinn, the bottom line is “I’m here because I really want to be.” Working mostly at her home computer, she goes to campus once a week at 6 or 6:30 a.m., then returns at 3 or 3:30 p.m. to greet her children as they come home.

“There’s no one else I know of who is doing this,” she notes. “But one tradeoff is that I haven’t been able to travel to present my results. Not with two kids in diapers.” But that will change in July, when she presents data at a conference in Italy.

She has already made many presentations to one of the toughest audiences known: kindergarteners and first-graders.

“They call me ‘scientist Kristy,'” she laughs.  “A lot of little girls come up and say, ‘I want to be a scientist when I grow up.’ That’s to die for.

“The life/work balance has been very difficult, but on the positive side, I’ve done it. I get to work in astrophysics at a top-notch research institution and be home with my kids. I don’t have the whole enchilada, but I have a taco. I don’t have it all, but I have enough. It’s phenomenal.”

UMNews: Long voyage to the stars: An unlikely astrophysics odyssey