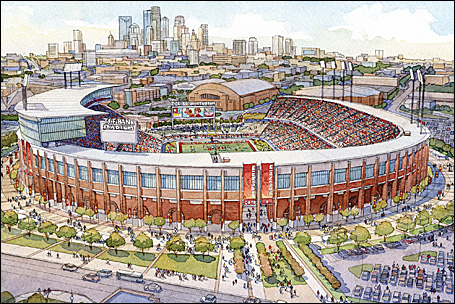 Courtesy of the University of Minnesota

The opening kickoff at TCF Bank Stadium is just the length of a football season away, and for fans of outdoor football on campus — who will have waited 1,447 weeks between opportunities to experience it — Sept. 12 can’t arrive soon enough.

One element of the new facility that has attracted little fanfare is the U’s commitment to working through the ramifications of the new stadium with the people who live and work in the surrounding area.

To that end, the university created the Stadium Area Advisory Group (SAAG) in 2004 and invited every adjacent neighborhood, business association, municipality, and government entity to get involved in regular meetings. Over the years, meetings have drawn an average of 25 to 35 participants, “depending on how hot the issue is,” says Jan Morlock, the U’s director of community relations, who was instrumental in establishing the group.

Morlock says the meetings have often produced spirited discussions, especially with regard to the three “T”s: traffic, trash, and tailgating. Neighbors have long been concerned about uncivil behavior that, when sustained, has a significant impact on quality of life in the neighborhoods.

They want to make sure that celebrations related to events at the stadium remain safe and civil. Addressing these and other issues that may arise will require ongoing monitoring and discussions, and SAAG will meet following the first three games in the new stadium to assess how the game-day experience went for neighborhood residents.

“The stadium is a reality whether the people support it or not,” says Joan Menken, a member of SAAG, a long-time member of the Southeast Como Improvement Association and a resident of the Southeast Como neighborhood for about half a century. “It can have pluses; it can also have significant minuses, depending on how we deal with a number of issues.”

She cites traffic, parking, and the concerns that fall under the umbrella of “livability” — drinking, parties, litter, and the like. Those are precisely the issues that SAAG has sought to both discuss and develop solutions for. “I’m happy that we have SAAG,” Menken says. “That was a monumental start. It’s a group and a process we’ve never had before.”

“One thing that has made it more potent is at times we’ve been discussing things that have policy implications,” Morlock notes. It helps, she adds, that university leaders like Vice President of University Services Kathleen O’Brien, Director of Athletics Joel Maturi, and Vice President and CFO Richard Pfutzenreuter have sat at the table with community members. “The people who are really calling the shots here at the U at the executive level have been accessible to this Stadium Area Advisory Group,” Morlock says.

Still, he senses the occasional uneasiness neighborhood residents have toward the U, even if they’re glad to live in close proximity to it. “The problem with the University of Minnesota is it’s a big beast, and when it moves, it breaks things, perhaps not intentionally, but that’s the result,” he says.  If that’s the nature of the beast, Banks thinks the SAAG discussions have been an effective means of taming it. “I think the efforts have been genuine and that the university has been responsive,” he says. “So I think the process has been good.”

It doesn’t take long to figure out where Skott Johnson stands on the stadium. A visit to his Autographics Printing storefront on 4th Street and 13th Avenue offers the first hint. On the east wall — about a half mile due west of the stadium — is a cardboard cutout of Goldy holding a football in a Heisman Trophy pose. Johnson lived on fraternity row and had season tickets in the Cal Stoll era, when the Gophers fluttered around the .500 mark. He’s now the president of the Dinkytown Business Association.

“A good number of the merchants here remember when [Memorial Stadium] was on campus and what those Saturdays were like, and they’re anxious to get back to those days,” says Johnson. “It was very family oriented and you could see lots of reunions going on — friends who hadn’t seen each other since college. And then just to hear the game. Because it was an open-air stadium, even if you didn’t have a ticket you could hear when there was a touchdown; you could hear the band. It was pretty exciting all around campus.”

Johnson says he’s not concerned about game-day traffic hindering Dinkytown commerce, and points out that when Memorial Stadium was around, merchants used to plan special events for game days. “Maybe at the first game there will be a couple of gridlocks, but they’re going to figure it out,” he says. “The U has certainly planned well for it. [And] they have meetings scheduled after the games to discuss, ‘How do we improve on the next one?’ I just don’t see it being a problem.”

For Banks, any concerns he has about parking and traffic are tempered by his knowledge of history. “Overall, when you boil it all down, we have had a 60,000-seat stadium (Memorial Stadium) at the University of Minnesota in the past. We lived with it successfully.” Thanks to the diligent work of SAAG, prospects are excellent that the same will be said of the new era of on-campus football.

From the May-June issue of Minnesota, the magazine of the University of Minnesota Alumni Association.

UMNews: Out in the open on TCF Bank Stadium