They’re the unsung heroes of the football season, not to mention a good share of the rest of the sports calendar. Their beats fill the breaks between the plays on the field; they keep fans glued to their seats at halftime; and without them, the “Rouser” would fail to rouse.

As part of their participation, all band members register for Music 3480 — the official marching band class in the School of Music. And like most athletes, they devote countless hours to perfecting their craft.

Their season kicks off with a two-week Spat Camp at the end of August. The “camp” is intensive, with three-a-day practices interrupted only by meals and refreshments — all in an effort to hone their skills for football Saturdays. No one said that playing in an elite marching band is easy.

Or easy on your footwear. In years past, band members have had to practice their formations on a paved and lined “field” behind the track at the Bierman athletic complex. Matt Schuette, a junior trombone player, pointed down at his foot to illustrate the pitfalls of pounding the pavement. “I lost this part of my shoe just from spinning on the asphalt,” he says.

Taking it to the Bank
Much has been made about the Gopher football team’s move back to campus to play in TCF Bank Stadium. But the gridiron Gophers aren’t the only students getting a new home. The Marching Band moved into TCF Bank Stadium on July 25, becoming one of only two bands Diem knows of to be housed at the campus football stadium. 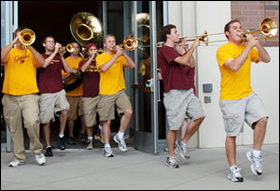 Photo by Rick Moore
On July 25, members of the University of Minnesota Marching Band stepped out of their new space in TCF Bank Stadium and entertained the moving-day crowd with a rendition of the Minnesota Rouser.

For nearly 80 years, band members have made their home at Northrop Auditorium, which meant they had to spend up to five hours each week trudging to and from that asphalt practice field. And on Saturdays, they needed nine buses to transport their show to the Metrodome (at a weekly cost of $3,000-$4,000).

The old digs were utilitarian at best. “If anyone came to town to perform in Northrop Auditorium, they would take the stage and we were outside, regardless of the weather,” says Tim Diem, director of the Marching Band.

The Gopher football team can soon boast of having the largest locker room in the free world. (It would take running back Duane Bennett more than six seconds to sprint from one end to the other.) But the band’s space at TCF Bank Stadium is none too shabby, either. Or small. The band will have access to 20,000 square feet of space, including a main rehearsal hall and two smaller rehearsal spaces; a music library, an archive room; uniform and equipment maintenance and storage rooms; and locker and shower facilities sufficient for the entire band.

“The new space really brings us into the 21st century,” says Diem. “We’ll have audio and video recording abilities there, so we can have nearly instantaneous review of our rehearsals and performances. That means that the band will tighten up new shows much faster than in the past.”

Dozens of band members helped out with the move from Northrop to the stadium on July 25, carting instruments, equipment, and uniforms into the new space. They were uniformly giddy about their new home.

“It’s pretty nice that they would give us this kind of a space. It’s definitely needed and definitely more convenient than at Northrop [and] the parking lot we used to practice on,” says Schuette. “I can’t wait till things actually start going down like rehearsals and band functions. It’ll be exciting to see this place come alive.”

The band produces a new show for every football game (there will be seven home games at the new stadium this year). It also performs at the homecoming parade, one Vikings home game, and an occasional football game on the road, which hopefully will include a game on or after New Year’s Day. There’s also the annual Indoor Concert at Northrop, when the group showcases its entire repertoire.

On move-in day for the band at the new stadium, excitement was running particularly high for the season at hand. “I think the new space is the best facility in the Big Ten right now,” says Becky Schmidt, a fifth-year senior flutist. “It’s definitely going to help you see the power of the University of Minnesota Marching Band like you’ve never seen it before.”

UMNews: Strike up the band